Adonai: Lord and Master in and over All

One way to learn about God is to study what names He is known by. Different names can describe different aspects or characteristics of God. Today we will look at the Hebrew word adonai which means “lord” or “master”. When this specific word refers to God, it is a proper noun and is capitalized as Lord.

Adonai is the plural form of the word adon and can literally be translated as “my lords.” RC Sproul comments that the suffix ai intensifies the meaning of adon so that adonai means the ultimate Lord, the Lord of all. The plural form is used primarily in reference to God but sometimes refers to men as well. It occurs over 400 times in the Old Testament, is used heavily in Isaiah and Ezekiel, and first appears in Genesis 15:2. Sometimes adonai is used in place of the personal name for God, YHWH, in the Old Testament to prevent violation of the Third Commandment.

In the Septuagint, the Greek Old Testament, adonai and YHWH, are translated kurios or lord. The New Testament uses the same word, and when the Apostles and Gospel writers quote from the Old Testament, they are usually quoting from the Septuagint, although not always. Jesus is referred to as “lord” over 700 times in the New Testament. This does not mean that those who called Him “lord” were always referring to Him with a proper noun, but usually were using a polite form of address, such as we use the word “sir” today.

When we realize that adonai is speaking of God and Jesus as Lord and Master, we need to recognize a few things. The word Adonai speaks to God’s right to rule us as our Master. Since God is our master, we are His slaves. The slave is to be in complete submission to the master. As mentioned before, adonai denotes Lord over all, even for those who refuse to submit. This little word speaks strongly against the self-centered mindset of today’s culture, where everyone wishes to be his or her own master. The word adonai shows us that such thinking is futile and irrational, because one day, every knee will bow to the Lord Jesus and every tongue will confess that He is Lord, (Phil. 2:10-11) whether they like it or not.

Submit to Him today and receive His loving embrace, for Jesus is not a harsh Lord, but a wonderful benevolent Master. Adonai speaks to the power of God and His willingness to supply for all of our needs (Ps 68:19). It denotes a relationship, for God has total possession of us. His people must gladly submit and obey to Him, not with just our lips, but with our entire life. James Montgomery Boice helpfully points out that the early church would have understood Adonai in the way I’ve described it in this article:

The Greek word for Lord is kurios, the word used by citizens of the Roman empire to acknowledge the divinity of Caesar. This title was never used of the emperors until they were thought to be deified through a religious ceremony; therefore, it was used as a divine title. Within the empire there was a test phrase used to check the loyalty of the people. It was Kyrios Kaiser, and it meant “Caesar is Lord.” Christians who would not say these words were later singled out from pagans and executed. In those days when a Christian insisted that Jesus is Lord he meant that Jesus, not Caesar, is divine. The same meaning is present when the word occurs in Hebrew, only more so. The Hebrew word is Adonai. It is a title somewhat like our “sir,” but it assumed an extraordinary importance in Hebrew speech because in practice it replaced the personal name of God, Jehovah. No Jew pronounced the word “Jehovah,” even when reading the Bible. Instead he said, “Adonai.”[i] 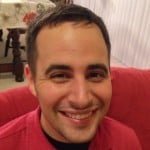 I am a writer with a desire to teach Church History and Theology to those who have little awareness or knowledge of it. I want to bring Christians closer to Christ and help instill a daily hunger for the Word and the Church through studies, reviews, and art. I have a B.S. in multimedia studies and film and an M.A. Church history and theology. I hope to pursue further studies in Church/State relations at Whitefield Theological Seminary. I enjoy early American history, reading, writing, kayaking, and ice hockey. I also write fiction novels and plan to produce documentaries dealing with religious freedom and church history. I live in Colonial Williamsburg with my wife Larisa.