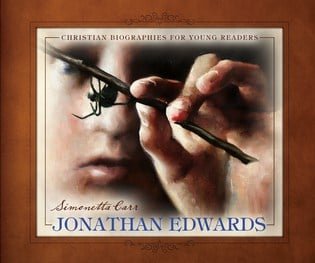 With fascinating stories, colorful illustrations, and engaging style, Simonetta Carr presents the life of Jonathan Edwards in a fun and easy-to-understand way. There’s one way to put a book such as this to the test—use it. My son and daughter love it!

Mrs. Carr was born in Italy, has written for a number of magazines and newspapers, homeschooled her eight children, and is a member of Christ United Reformed Church in California.

Jonathan Edwards is the eighth book in the Christian Biographies for Young Readers from Reformation Heritage Books. Other people surveyed include Athanasius, John Knox, John Calvin, John Owen, Anselm, Augustine, and Lady Jane Grey—all by Simonetta Carr. The illustrations are by Matt Abraxas, who teaches art in Boulder, Colorado.

Edwards is primarily known as preacher of “Sinners in the Hands of an Angry God” and contributor to the Great Awakening in the early 18th Century. Unfortunately, most people have missed a more complete picture of Edwards—one who took great delight and joy in God, who displayed passion for God’s glory in all things, unwavering resolve to dedicate his time toward advancing God’s glory on earth, and a deep-seated devotion to shepherding souls under his pastoral care.

The book is filled with illustrations, maps, real-life pictures (not of Edward, of course!), and historic paintings of what life was like during the early 1700s. Because of these supplemental features and the pleasurable writing itself, Mrs. Carr does an able job of bringing Edwards to life. Taking the reader from Edwards’ childhood, to his days as a student and pastor, to taking part in the Great Awakening, to sorrow and rejection, to his missions among the Native Americans, and his final years as writer and college president.

I’m glad that Carr includes the stories of Edwards’ wife, Sarah, and the young missionary, David Brainerd. Both people—in their own right—deserve fully recognition for their love, devotion, and service.

As a historian myself, I especially loved the added features of Edwards’ timeline and the “Did You Know?” section at the end. And I didn’t know most of them! For example, did you know that Edwards’ entire family was very tall? People used to say jokingly that Timothy Edwards—Jonathan’s father—had sixty feet of daughters. Edwards also pastored the same church for fifty-six years! I think the average pastorate is somewhere around three years today. Incredible.

I LOVED this book, and so did my kids. I usually try to find something critical to say in my reviews, but I simply couldn’t for this book. Take up and read—your heart, mind, and children will be better for it!