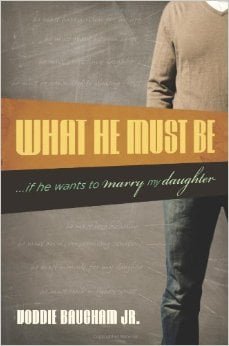 What He Must Be…If He Wants to Marry My Daughter 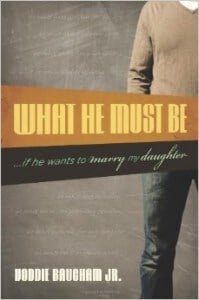 Let’s be honest. The modern model of relationships is broken. Divorce is rampant, so-called couples live together and have children outside of wedlock, and our youth run from one relationship to another leaving a trail of broken hearts. Is this God’s design for male/female sexuality and relationships? Is the modern dating model and the go your own way Fleetwood Mac approach something rooted in Scripture? Have we as parents been neglecting our God given responsibility to instruct our children and to oversee their relationships? The evidence around us seems to shout that we have not been following God’s guidelines. Pastor and author Voddie Baucham, in his book What He Must Be…If He Wants to Marry My Daughter, urges the people of God to jettison the modern model in favor of a biblical approach to the instruction of our children regarding relationships.

This is a book that will challenge you, especially if you have bought into the idea that an individual, in particular a teenager jumping from relationship to relationship is a positive way of finding a mate. Furthermore, this book will challenge those who think ideas of courtship or betrothal are old fashioned and unnecessary ways to help children move towards the marriage altar in a deliberate and God honoring way. Baucham rejects the modern dating model as a complete failure, and instead, embraces the courtship model as taught in Scripture.

I have a daughter and my wife and I often joke about beginning the interview process for her future husband by sitting on the front porch polishing our rifle. We are only half kidding with the humorous part being that of sitting on the front porch with the rifle. My wife and I firmly believe it is absolutely vital for us to be involved in overseeing and having a great deal of input into who our daughter associates with, especially when it comes to boys. Moreover, it is vital that as parents, we instruct her in what to look for in a mate, ensuring through the course of that instruction, that we are involved in the “interview” process. While that may seem overbearing to some, as Baucham rightly notes, “as a father, it is my responsibility to teach my daughter what these requirements are, encourage her not to settle for less, and walk with her through the process of evaluating potential suitors.” Old fashioned? Perhaps, but it is biblically rooted.

Many tell their children to simply “follow your heart” when it comes to choosing a mate. When their daughter comes home and presents to them a young man the parents have never met, bubbling over about how much they are in love, most parents just smile, nod their head, and whip out the checkbook to start paying for the wedding. In far too many instances, there is no depth of conversation with this young man or his parents to ascertain his background, relationship with God, or future job plans. The approach of following your heart falls short of being valid. Baucham saliently comments “we need to reconsider our commitment to parental assistance in selecting a life partner in light of our biblical responsibility to protect our children’s purity, to protect their hearts, to protect their focus, and to protect their future spouse.”

Baucham calls this biblical approach gospel patriarchy, an approach rooted in the need to instruct our daughters and sons on what they should be looking for biblically speaking when it comes to choosing a mate. Fathers have a huge role in this process as they have the God given responsibility of protecting their daughters and providing that umbrella of security for them up until the point when they give their daughters hand in marriage to a man who will take on that baton of responsibility. Baucham avers there are four main requirements a young man must meet in order to be considered worthy of his daughter and I submit these biblically sound requirements will be used in my home as well. The future suitor must be a follower of Christ, be prepared to lead, lead like Christ, and must be committed to children.

The first three requirements should fall under the no-brainer category; however, the final requirement, that of being committed to children could give some pause. Baucham correctly notes that we live in a society that more often than not views children as a burden. Many wait until they have achieved a certain level of success in their career field before they even think about bringing children into the world. That pursuit of success seems to take longer and longer, thus resulting in many couples ultimately choosing to skip having children at all. Even adopting a child is rejected in the pursuit of career. Even those who have children often spend little time with their kids as they have to spend most of their day in the office earning enough money to pay for the “finer things in life.”

Baucham suggest something that might seem a bit radical in the minds of some and that is the need to take a look at whether this modern model is also broken. Has our pursuit of things impacted our ability to spend time with our children, discipling and instructing them in the way they should go? Each family will need to assess their own situation; however, Baucham does rightly suggest the merit of looking at ways to become a single-income family, or at least moving towards a place where a Titus 2 situation can become a reality at some point in the future. If anything, this is helpful food for thought that my wife and I will discuss and I think should be something discussed in many more households. This idea goes against the grain of society as it is viewed as nothing more than keeping the woman back forcing her to be barefoot and pregnant. Nothing could be further from the truth and what Baucham suggests and the input from many fine theologians and most importantly the many biblical passages that speak to this issue must be prayerfully considered.

Perhaps the best part of this book was Baucham’s discussion of the need for a future suitor to practice the four P’s of being a protector, provider, prophet, and priest. If these qualities are not resident within a potential suitor for your daughter, that should give you as a father much pause as these are the qualities noted throughout Scripture that must be part of the individual who leads the home. I also appreciated that Baucham spent an entire chapter speaking to the reality that most young men know nothing of these biblical traits of manhood. Given that reality, godly men must spend time with their own sons as well as young men they come regularly in contact with in the circles their daughter resides, instructing those young men in the things of God. Baucham calls this building up the future crop of godly men for our daughters. This is a call to action, one I took to heart.

To all the fathers out there including myself, it is time to put your man pants on. Give Baucham’s book a read and consider the biblically rooted truths he presents. Stop thinking your daughter or son can go it alone in their search for a godly mate. Take an honest look at the modern dating model with its pitfalls and realize there is a better way, that of taking an active role in guiding your children to the altar so they can stand holy and pure in Christ next to a spouse they will spend the rest of their lives with. Go against the tide that declares hopping from relationship to relationship is just how it works. As Baucham notes, since “the bar has been set so low for so long in our culture, many of the qualities and characteristics seems strange, and perhaps a bit distant. But they are supposed to be.” All parents should pick up a copy of this book and take to heart the godly principles Baucham outlines. More than that, they should put into immediate practice the instruction and discipling of their children for the glory of God so that we may raise a future generation of youth who are committed to the sanctity of marriage and the need to remain pure physically, spiritually, and emotionally upon entering their vows of marriage.