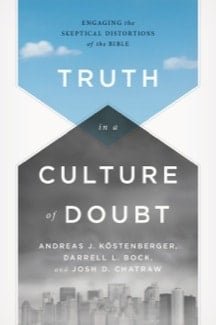 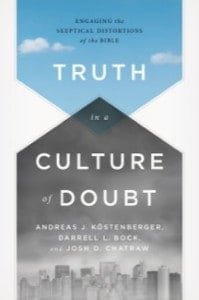 There has been an effort in recent years by authors such as liberal scholar Bart Ehrman to try and present Scripture as being in error. Such challenges, while really nothing new in the history of the Church, do present an issue for the Christian, especially due to the widespread popularity of books that oppose Scripture as the source of truth or that try and confuse and twist the Word of God. It is vital for believers to be well grounded in matters of the faith so they coherently address those who seek to present God’s Word as nothing but fairytales. Andreas Kostenberger, Darrell Bock, and Josh Chatraw, in their timely and relevant book Truth in a Culture of Doubt, provide the reader with the tools by which they can address the skepticism of our day.

The contributors to this book address five key issues championed by skeptics, namely “Is God Immoral Because He Allows Suffering?”, “Is the Bible Full of Irresolvable Contradictions?”, “Are the Biblical Manuscripts Corrupt?”, and “Were There Many Christianities?”. Each chapter provides a list of claims that will be addressed, an analysis of Bart Ehrman’s issues with Scripture, astute biblical responses to the skeptical claims made by Ehrman, concluding with discussion questions that provide an opportunity for the reader to dig into the subject matter a bit further.

There is much to enjoy in this book and the authors do not shy away from engaging some of the more difficult apologetics topics. For instance, in addressing the often thorny subject of why does God allow suffering, the authors note, “The more Ehrman builds his case against God based on morality, and the more he urges people to help others, the more the problem surfaces: Where is Ehrman getting his morality?” In order for there to even be a proper discussion on issues of morality such as why suffering exists to begin with, a foundation has to be established as to how one even defines morality. Since Ehrman has rejected the truth found in Scripture as the basis for how one understands matters of right and wrong, let alone how we understand God, it appears each individual in his estimation gets to decided right or wrong for themselves.

Another favorite line of the skeptics is declaring that the biblical manuscripts were corrupt and thus God’s Word cannot be trusted as being without error. Ehrman is a vocal proponent of this line of thinking and why not as after all, if one can demonstrate the source of truth, in this case Scripture, to be fallible, then the entire foundation will then fall. In response to Erhman’s assertions, the authors clearly demonstrate the truly false claims being made by Ehrman and others to include the inconsistent manner in which they approach ancient manuscripts. A notable and extremely strong response to Ehrman’s vitriol is the fact that the “New Testament not only has more manuscript evidence than any other book from a similar time period” and furthermore, “it also has the smallest time gap between surviving manuscripts and original manuscripts of any work of antiquity.”

Ultimately, this book is less about the failures of Ehrman to support his wild accusations. It is more about demonstrating the clear reality that God’s Word can be trusted. Skeptics will come and go; however, God’s Word continues to stand despite the continual efforts to undermine it. Since we live in a culture that so easily latches on to skepticism of Scripture, it is important for Christians to be equipped so they can respond to these repeated accusations made by Ehrman and many others. In an age of doubt, only the truth found in Scripture will reign supreme.

I highly recommend this book for all believers. It is scholarly yet very accessible and is a valuable apologetics tool to have in one’s arsenal, in particular when it comes to responding to the popular yet incorrect accusations made against Scripture by the likes of Bart Ehrman. The responses provided in this book are one’s the reader can utilize in conversation with others whether that is in personal conversation or discussions on social media. Reading this book has given me a greater appreciation for the Word of God. It is for this reason that I will turn again to this book as a source when engaging those struggle with doubt or follow Ehrman’s teaching.

Buy the book from Truth in a Culture of Doubt: Engaging Skeptical Challenges to the Bible

, or from B&H Academic by clicking here.