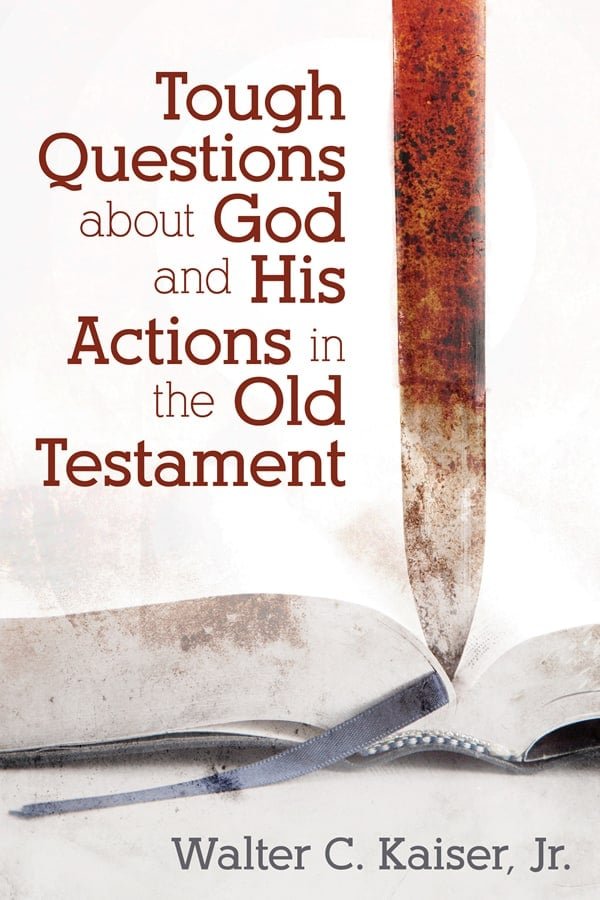 Tough Questions about God and His Actions in the Old Testament

The Old Testament often gets a bad rap, arguably due to the perceived difference between the actions of God during that period of history as compared to what transpires in the New Testament. The God of the Old Testament is at times viewed as one of malicious rage compared to the grace and loving mercy of His Son. Noted atheist Richard Dawkins even went so far as to describe the God of the Old Testament as “arguably the most unpleasant character in all fiction: jealous and proud of it; a petty, unjust, unforgiving control-freak; a vindictive, bloodthirsty ethnic cleanser; a misogynistic, homophobic, racist, infanticidal, genocidal, filicidal, pestilential, megalomaniacal, sadomasochistic, capriciously malevolent bully.”

Kaiser addresses these issues using the approach of comparing what some believe to be true about God’s actions in the Old Testament and then digs into the truth of Scripture to examine if the aforementioned beliefs have any facticity to them. Is God merciful or full of wrath? Is He peaceful or devoted to ethnic cleansing? Does God speak the truth or does He occasionally slip in a fib to accomplish His goals? Did God utilize the method of evolution or was everything created by His word? What about law and grace? Is He accepting of polygamy or did He really desire one man and one woman to form the basis for marriage? Is God truly sovereign or does Satan give God all He can handle? Does God know all or is He perhaps just the great cosmic guesser? Does God promote male domination of women or does the Bible teach woman is man’s helpmate? Finally, what about those dietary laws.

These topics often form the basis for debate between those who affirm the truth of Scripture and those who seek to deny God is who the Bible says He is all about. Understanding how to respond to such questions is vital when doing apologetics, especially with those determined to present God as a fallible power hungry maniacal being. Throughout this book, Kaiser does a great job of looking at the biblical text, given that is where we find God revealing His character and actions.

A couple of chapters I found most intriguing were Kaiser’s discussion of creation versus evolution and his comments on the dietary laws. In relation to his comments on creation versus evolution, it is clear that Kaiser is not fond of evolutionary dogma and he aptly notes how the Gap Theory’s presentation is found wanting of any biblical support. It did seem as if Kaiser danced around the topic of how to treat the days of creation. I was left wondering just a bit where he stands on that particular issue; however, Kaiser did make it quite clear that Scripture in no way supports God as using evolution to bring all things into being.

It was a bit interesting to see Kaiser address the issue of the dietary laws. One would not normally view such an issue as representing a God who displays the actions someone like Dawkins believes took place. After all, what would be the big deal of God establishing some food as acceptable with other options not being available for the Israelite palate? The New Testament changed all that anyway so it must have been simply a symbolic separation of Israel from the surrounding nations, allegory, or because at some point in the future, the unclean animals could be properly handled. This is actually a topic I have been digging into quote a bit of late and I found Kaiser’s discussion points to be quite on point. The typical passages used to support the cessation of the dietary laws, when examined a bit closer, actually speak of issues such as meat sacrificed to idols with no connection to the overall dietary law construct. Kaiser presents grammatical issues that must be addressed and that are often overlooked which provide some greater insight into for example what Jesus was addressing in passages such as Mark 7:19. I also found his comments on Acts 15 to be enlightening, especially since this is one of the texts often used as proof the dietary laws were brought to an end. The point of Kaiser’s comments is not to state that holiness or salvation is connected with what one eats. What he does point out is something important, namely that these laws from God “show us that how we live is just as important as what we say we believe.” There will certainly be some who might take issue with his comments on these dietary laws, especially those committed to declaring that the entire Old Covenant construct was nailed to the cross. Those who might take opposition to his comments would do well to at least consider the linguistic and contextual arguments he presents. I found them to be quite compelling and something I will study further.

If you have every wondered why it seems God acts differently in the Old Testament than He seems to in the New Testament or if that conflict has ever been presented to you as a means to deny Scripture, Kaiser’s book is one I would recommend you read. He does a great job of examining the arguments, rooting his comments in the evidence we can find from the pages of Scripture. This book will serve as a valuable tool for examining the reality that God is not schizophrenic. In fact, the complete opposite is true and it is that consistency of character which Kaiser aptly reveals in this book.

I received this book for free from Kregel Publications and the opinions I have expressed are my own. I am disclosing this in accordance with the Federal Trade Commission’s 16 CFR, Part 255 : “Guides Concerning the Use of Endorsements and Testimonials in Advertising.”