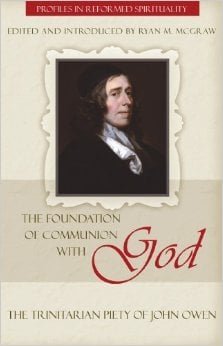 John Owen has long been a favorite of mine, in particular among the more noted Puritan authors. In fact, recently I purchased his collected works which I am sure will take a lifetime to read. So when a book comes along that extracts key statements on a particular subject from an author’s voluminous works, typically such books are very helpful in that they encapsulate someone like John Owen’s thoughts on a matter. Such a compilation of thought into one resource can save the reader much time and effort when they are exploring an issue and for that matter, what an author has written on a certain subject. The Foundation of Communion with God: The Trinitarian Piety of John Owen edited by Ryan McGraw, is just such a helpful compilation, in this case capturing the overarching thoughts of John Owen on the trinity and how it relates to public worship.

McGraw rightly notes in the introduction to this book that John Owen has long been recognized as “one of the most important theologians of the seventeenth century.” Furthermore, Owen has had a lasting influence on Reformed thought and theology as a whole. As mentioned earlier, the writings of John Owen are many and it does take some degree of concerted effort to both read and at times comprehend his thoughts on any number of theological subjects of great import. For those perhaps not familiar with who John Owen was and why his writings continue to be of great value, McGraw provides a helpful overview of Owen’s life, writings, and theology.

The Foundation of Communion with God is divided into three sections: 1) Knowing God as Triune; 2) Heavenly-Mindedness and Apostasy; and 3) Covenant and Church. Subsumed within each section are a series of short excerpts from Owen’s writings on subjects related to the overarching section headings. Breaking down the voluminous thoughts of Owen into easier to read portions greatly assists the reader in capturing Owen’s position on the various subjects addressed in this book. This makes tackling John Owen a far more accessible venture than would be encountered should on simply begin diving into his larger collected works as a whole.

Owen firmly believed in the importance of the doctrine of the Trinity, in particular how that doctrine relates to matters of worship and how the minister and the parishioners could draw closer to God through the ordinances of public worship. Moreover, communion with God was according to Owen is vital to the very foundation of the believer’s life. The various means by which this intimate communion takes place are elaborated in the first section of this book, most notably communion with God in love, in personal grace, in times of spiritual hardship, through the grace bestowed on the cross, in holiness, through the mortification of sin, and through our adoption as sons of God.

Anyone with even a cursory knowledge of the writings of John Owen or the Puritan’s in general knows the importance placed on dealing with sin, a daily process that is described as mortifying sin by Owen. To this process, Owen saliently declares this to be the work of the believer through the power of the Holy Spirit, noting “A man may easier see without eyes and speak without a tongue than mortify one sin without the Spirit.” Such mortification takes place through communion with God and Owen repeatedly addresses how such a process takes place leaving no doubt in the mind of the reader that dealing with sin for example is accomplished by the grace of God, through the cross of Christ, and the power of the Holy Spirit’s work of sanctification.

In the typical style of the Puritans, Owen ensures the reader understands the practical side of what communion with God looks like in daily practice. It is this focus on the theological underpinned by the practical application that makes the writings of Puritan authors such as Owen so valuable even today. For instance, Owen states the importance of obedience to God’s commands as indicative of one who is living in communion with God. Owen rightly asks the important question, “For what holiness can there be where men live in an open disobedience to the commands of Christ and in a neglect of the use of those means that He has appointed to beget and preserve it in our souls?” If we are in communion and love with God, we will do what Christ commanded which is living in obedience to Scripture. Owen repeatedly drives home that point throughout the excerpts of his writings provided in section two of this book.

This excellent book concludes with some helpful statements on the covenant and the church. In this final section, Owen notes the importance of the preached Word not just on the hearts of the people, but also on the heart of the preacher who according to Owen is so vital in this communion with God process within the church itself, connecting the people to God through the declaring of God’s word. Owen avers, “He who does not feed on, and digest, and thrive by what he prepares for his people, he may give them poison, as far as he knows; for, unless he finds the power of it in his own heart, he cannot have any ground of confidence that it will have power in the hearts of others.” This is an important and somewhat frightening point for all pastors to ruminate on as they prepare to preach the word of God.

I highly recommend this book for all believers. It is a helpful compendium of Owen’s thoughts on the issue of the Trinity as it relates to how we commune with God on a personal and a corporate level. Full of valuable insight and a highly accessible approach to Owen’s writings, the truth found in this book will be a lasting influence in your relationship with God and growing deeper in that relationship.

This book is available for purchase from Reformation Heritage Books by clicking here.

I received this book for free from Reformation Heritage Books via Cross Focused Reviews for this review. I was not required to write a positive review. The opinions I have expressed are my own. I am disclosing this in accordance with the Federal Trade Commission’s 16 CFR, Part 255 : “Guides Concerning the Use of Endorsements and Testimonials in Advertising.”