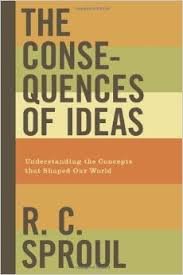 The Consequences of Ideas: Understanding the Concepts that Shaped Our World

Ideas have consequences, as evidenced by the history of mankind. On that fateful day September 11, 2001, the Twin Towers of New York City were hit by two planes packed to with innocent passengers and a handful of Muslim terrorists. These terrorists took their lives and those in the plane along with them all under the guise of a jihad against the Great Satan—the United States of America. Dr. R.C. Sproul, one of the greatest theologians of our day, wrote the book, The Consequences of Ideas: Understanding the Concepts that Shaped Our World, to help Christians become familiar with the streams of thought that have saturated Western culture through the ages, with the goal of better equipping God’s people to influence this culture for Christ.

In this book, Dr. Sproul seeks to trace the contours of Western philosophy from the ancients (including Plato, Aquinas, etc.) to the molders of modern thought—Descartes, Kant, and Freud. Sproul proves that ideas are not just passing fads but can endure for generations to come, with wide-ranging consequences for all humanity.

As previously noted, we live in an environment in which the culture is rapidly changing. Within 24 hours of leaving one’s home, one can be almost anywhere in the world, simply by hopping on a plane. Reading Dr. Sproul’s book, The Consequences of Ideas, will help Christians to begin to understand some of the major players (the “Movers and Shakers”) and influencers of our modern Western civilization. Sproul writes in his typical easy-to-understand and helpful style. Readers will find this book to be a bit heavy, but also full of practical insight. I encourage you to check it out if you’re interested in the history of ideas, and how they have shaped our world today.

Title: The Consequences of ideas: Understanding the Concepts that shaped Our World