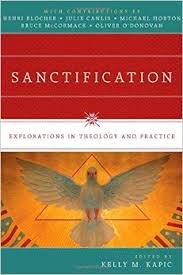 Sanctification: Explorations in Theology and Practice ed. by Kelly Kapic

The book’s twelve authors combine a host of backgrounds and perspectives to further the conversation on the topic of sanctification. It is a topic that is currently undergoing a renewed interest. Kapic points to the popular level discussion already happening. Some Reformed readers might think immediately of the debates between Tchividjian and DeYoung at TGC. This volume, however, has no interest in the popular level discussion. Instead, they are seeking to broaden the discussion. The essays are definitely of an academic theological nature, readers looking for more on the popular level conversation will be likely be overwhelmed. Readers, however, seeking to glance at the immense depth and complexity of the doctrine of sanctification will not be disappointed.

The book is not a unified presentation on the doctrine. As Kapic says:

No attempt has been made to provide a unified perspective on sanctification here – we are not presenting some new school of thought or anything like that, as some of the subtle disagreements even within this volume indicate. (11)

Think of the volume as its subtitle suggests: explorations in theology and practice. The bulk of this collection grew out of the Edinburgh Dogmatics Conference and as such they are proposals, not fully formed and fleshed out theological compositions. Yet, several the essays offered incredibly insightful and thought provoking nuance to the doctrine of sanctification and its place in the church and Christian life.

The work can be broken down into three parts. Part one, “Sanctified By Grace Through Faith In Union With Christ”, consists of four diverse approaches to understanding the relationship between union with Christ, faith, and the agency of the Holy Spirit in sanctification. Bruce McCormack’s essay on Karl Barth and John Wesley was particularly interesting and insightful. Part two discusses “Human Agency And Sanctification’s Relationship To Ethics.” The three essays in this collection are unique and some of my favorite from whole volume, including the contributions by Michael Horton and Oliver O’Donovan. Part three rounds out the work with “Theological And Pastoral Meditations On Sanctification.” While the whole work is edited with an eye towards ecclesiology, this last section makes that interest particularly evident.

The book is definitely academic in nature, pulling together some the leading theologians within modern Reformed scholasticism. In that regard, some of the essays are more accessible than others. It is also largely confined to the views of Reformed theologians, but should be of interest to those of a wider theological background.

I enjoyed the book as a whole. It was hard to get through at times, and took multiple readings to understand certain essays. While I might not recommend it to the average church member, to the mature theologian attempting to wrestle with the more complex features of the doctrine of sanctification, this will be a thought-provoking resource.