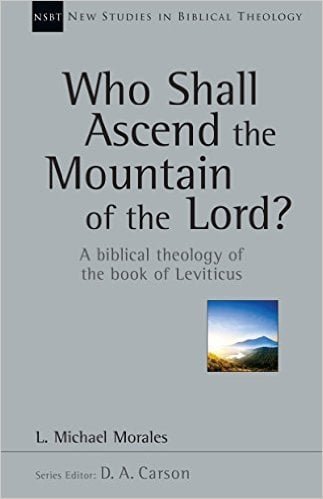 A Review of “Who Shall Ascend the Mountain of the Lord?” by L. Michael Morales

The book of Leviticus in the Old Testament has for far too long not received its due attention. L. Michael Morales explores rather brilliantly and comprehensively its central role in the Pentateuch and its significance to overall redemptive history in his fantastic book. Who Shall Ascend the Mountain of the Lord? is not just an explanation of Leviticus, it is an exploration of the rich theology of the Pentateuch as a whole.

The final, unofficial, division of the book wraps up chapters seven and eight by focusing on the theme of Zion. Chapter seven explores the “earthly house of God” through the narrative movement from Sinai to Temple. Chapter eight highlights the “heavenly house of God” by exploring the language of the spiritual Zion, and its relationship to Christ.

Who Shall Ascend the Mountain of the Lord? is a phenomenal work, and likely my favorite volume in the New Studies in Biblical Theology series from IVP. I regularly found myself amazed by Morales’ insights and his development of the theology of the Pentateuch.

His focus on the literary structure of the Pentateuch, for example, identified fascinating parallels for me between all the five books. I was struck by the repeating of themes and the progression of the people towards God. By focusing on Leviticus he gives us more than just an understanding of one book.

The relationship of Leviticus to the rest of the Pentateuch opens up the deeper meaning of the latter. In particular, I was struck by how much I learned about Genesis and Exodus from this study. Here again, the development of themes and their building to greater expression in Leviticus was astounding. I will not read these familiar accounts in Genesis the same way again. I know for many future studies, on many diverse books and topics, I will find this volume handy as a reference. The book is highly accessible, despite being written clearly as an academic volume. I highly, and I cannot emphasize that enough, highly commend Who Shall Ascend the Mountain of the Lord? to all readers.