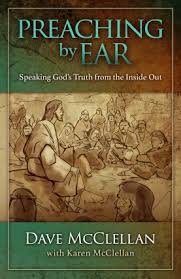 Preaching by Ear: Speaking God’s Truth From the Inside Out

While I am not a preacher, I must submit I do enjoy a quality sermon that is well delivered, demonstrates a great deal of preparation, and most importantly is biblically sound. Having never been a pastor and having never prepared a sermon for delivery, it is interesting to read and understand the methodologies involved for such an event. Some pastors seem to be inclined and comfortable with preparing and reading from what is essentially a script while others use a few notes as reminders for their sermon points. Dave McClellan in his book Preaching by Ear recommends a more oratory centric approach, one I found to be quite fascinating.

McClellan notes “The oral orientation is a movement away from safety and predictability. It’s a move toward vulnerability with a hint of the spontaneous. It’s not knowing exactly where you’ll go next. It has an openness, an unfinishedness. It pulls deeply from internal resources: emotion, experience, firsthand acquaintance with truth. It requires the preacher to speak into a live moment from a whole heart.” As a parishioner, I can only imagine that for many pastors, such an approach does indeed bring one to a position of vulnerability. A prepared sermon prepared and delivered in the manner one would expect for a seminary research paper certainly has a different feel than something prepared and delivered with a more conversational approach in mind.

Preaching by ear, the approach suggested by McClellan is rooted in the manner taken by Augustine, Plato, Aristotle, and Quintilian, great orators of old. In fact, McClellan uses their examples as a point of comparison and discussion. For example, he notes that Augustine believed a quality preacher “will not be consumed with looking eloquent or sounding eloquent. The good preacher is consumed with the truth of the message, which fuels a sort of unschooled or natural eloquence that is self-forgetful.” While I have attended seminary, I have yet to take a homiletics or teaching/preaching class meaning I am not up to speed on the methodology taught to the next wave of potential pastors. I would venture to say that spit and polish is something that is emphasized. While perhaps not overemphasized over and above the necessity for preaching truth, I would have to agree with McClellan that eloquence comes from an organic approach, from the delivery of the truth from a position of being fully engaged in the material that is being presented.

I also appreciated McClellan’s emphasis on pastor being trustworthy and credible presenters of truth. This emphasis is based upon statements from Aristotle to include his focus on a speaker’s ethos (credibility). Aristotle argued that one’s ethos “carries the most persuasive force.” This concept bears great importance to the delivered sermon. McClellan does an excellent job of relating to the reader what ethos means when applied to the pastor and the delivering of the sermon. He aptly states that ethos comes from reputation, vision, authority, is energized by good reasons, and finally, is evidenced by what he calls “shared time” – “a sense of union between preacher and audience”. This is when the audience feels that personal connection with the person delivering the message.

McClellan also spends a great deal of time demonstrating that the oral method of delivery has a long history. Additionally, he suggests that Scripture is really an oral book. In fact, he comments “we can see and hear that the transmission of Scripture is a confusingly beautiful blend of oral and literate sources.” Furthermore, he notes we see many times the reality that God spoke, either directly or through the biblical authors through inspiration by the Holy Spirit. Once again we see the oral element as essential. Parents are commanded in Deuteronomy 6 to speak of the things God commanded them to their children all day long and everywhere they go. Yet again, this is another emphasis on oral transmission of God’s word. Jesus noted the sheep hear the shepherd’s voice, another emphasis on orality.

For McClellan, this entire concept boils down to having the Word so deep within you that it is a natural response to bubble that message of God out through the delivering of the sermon. He saliently avers this internalization of Scripture necessitates “familiarity with Scripture.” An example of this is provide by McClellan, namely that of quoting from memory passages of Scripture during the sermon. This demonstrates the internalization and the reality that the pastor has taken the time to memorize the passage and furthermore, can properly use the passage in context.

Preaching by Ear is truly an interesting book. I highly recommend it not just for preachers but for all believers to better appreciate what goes into a sermon to include what I found to be a very solid approach, that of a more orally given sermon rather than a prepared script read in the manner a politician would from a teleprompter.

This book is available for purchase from Weaver Book Company by clicking here.

I received this book for free from Weaver Book Company via Cross Focused Reviews for this review. I was not required to write a positive review. The opinions I have expressed are my own. I am disclosing this in accordance with the Federal Trade Commission’s 16 CFR, Part 255 : “Guides Concerning the Use of Endorsements and Testimonials in Advertising.”