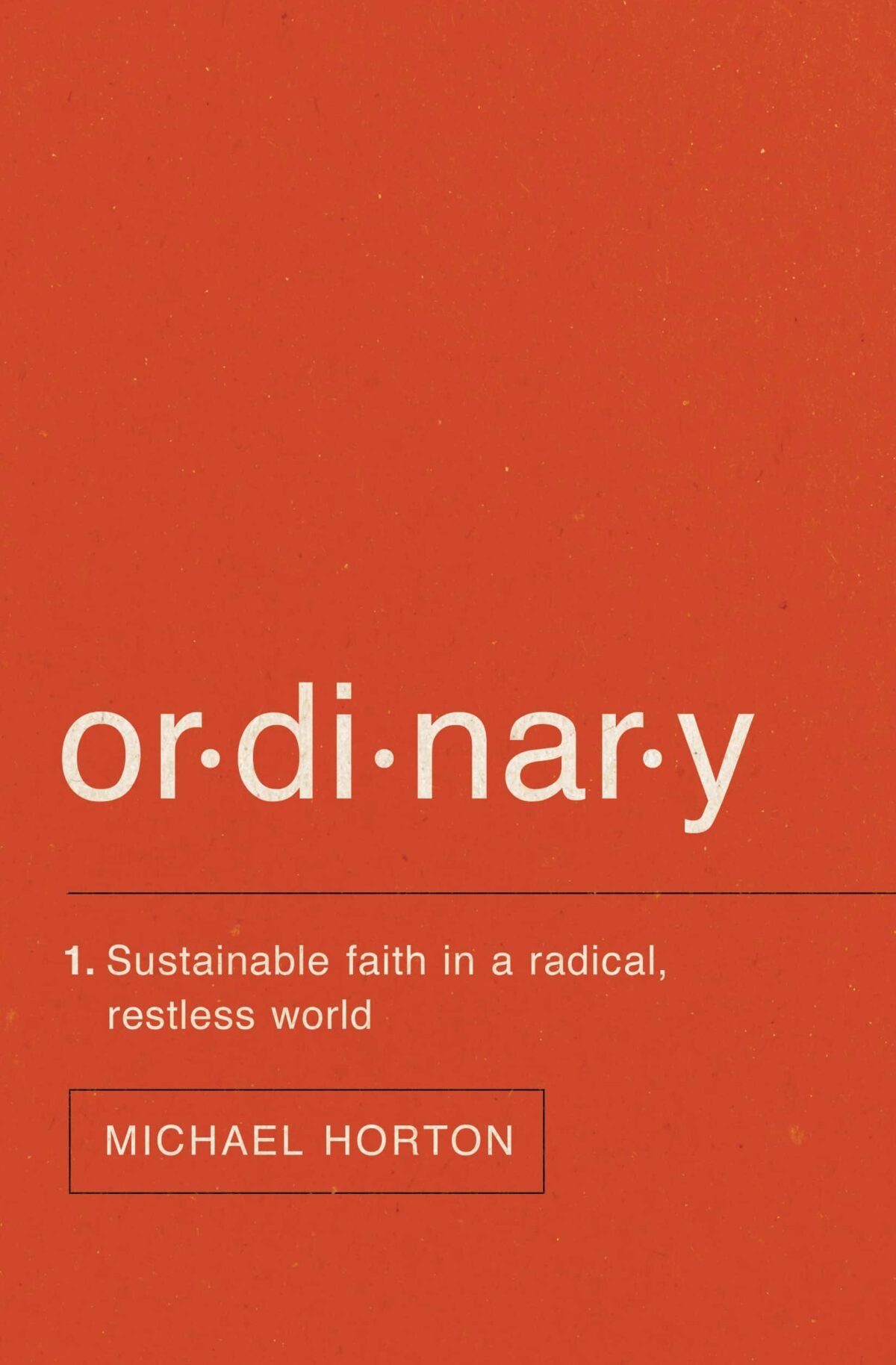 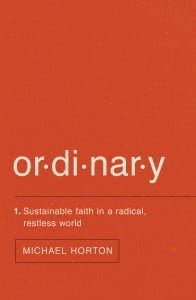 A “significant” move of the Spirit. The “Next Big Thing”. Programs. Young, Reformed, and Restless. These concepts, approaches, and perceptions are a few of the items that seem to consume believers these days. Words such as ordinary, sustainability, and steadfastness seem to be shoved to the sidelines in favor of the more shall we say glamorous ways of “doing the Lord’s work”. Michael Horton, in his latest book Ordinary seeks to provide a needed corrective to the search of riding the wave of the sensational which seems to be the focus of many.

To be called ordinary frankly will not sit well with others as after all, isn’t doing the Lord’s work something that will inherently result in an epic adventure and revolution or even an explosive breakthrough that will permeate the entire earth? Horton aptly notes “We’ve become accustomed to looking around restlessly for something new, the latest and greatest, that idea or product or person or experience that will solve our problems, give us some purpose, and change the world.” What if perhaps the reality of the Christian walk is something more along the lines of what is unfortunately labeled as ordinary?

For Horton, being ordinary is not a bad thing. Moreover, to be “ordinary” does not mean we have a complete lack of passion nor does it mean that we simply sit on the sidelines doing nothing for the kingdom. Horton correctly reminds the reader “The call to action, to have an active faith, is well-supported in Scripture. “Ordinary” does not mean passive. All believers should live out what they believe, should practice what they preach. But misguided or chaotic activism makes us sloppy.” This of course begs the question as to what type of action we should be engaged in that helps to ensure we remain focused on exactly what God desires us to be about doing.

Furthermore, there seems to be the idea that our actions are that which bring about the furthering of the Kingdom of God and His will upon the earth, as if our cleverly developed programs and well crafted sermon notes are the very thing that will bring people into the sheepfold and keep them there. To such an attitude, Horton states “The power of our activism, campaigns, movements, and strategies cannot forgive sins or raise the dead…That is why phrases like “living the gospel,” “being the gospel”, and “being partners with Jesus in his redemption of the world” are dangerous distortions of the biblical message of good news.” Now this is a rather challenging statement to consider given we are quite used to being told something rather different from the pulpit and from Christian literature.

I appreciated that Horton reminds the reader that “The gospel produces peace and empowers us to live by faith. We are no longer anxious, but secure and invigorated because we are crucified and raised with Christ. We are no longer trying to live up to the starting role we’ve given ourselves but are written into the story of Christ. We have nothing to prove, just a lot of work to do.” The work we have to do, while seemingly ordinary compared to the glitz and glamour and attention getting that often rears its ugly head, is nevertheless the very mission we have been given by God in His word. That mission is to declare the good news through the preached Word and by loving God, and loving others, enough to share that glorious and needed news of salvation at every turn. It is that gospel that is the power of God. Seem a bit ordinary? In actuality it is far from it. It is quite extraordinary.

Another aspect of this book I found interesting was Horton’s discussion of the term ambition, in particular the way it is used and applied within the church today and for that matter in society at large. Ambition, if focused on the proper things, is completely biblical. Horton correctly states “if by ambition we mean simply a drive or initiative in setting and reaching goals, there is nothing more natural to us as God’s image-bearers. God created us in righteousness and holiness, to extend his reign to the ends of the earth.” This means our ambition should be the continual focus of being obedient children, always focusing on the things of God. The flip side of ambition is the selfish application of this drive, the inward focus. Horton says this sinful attitude and perspective “expresses itself in idolatry.” Take a look around at the kingdom building of self that is taking place in far too many churches and ministries and you will see exactly what Horton is talking about. The ordinary, namely a life set on the singular goal of bring glory to God is being replaced with the search for the latest craze or persona.

There are a few aspects of this book I did take a bit of an issue with the first being the manner by which Horton expresses his thoughts. There are times when it could come across that Horton is suggesting no or perhaps a diminished need for action in the Christian life. While that is not the overarching purpose of his book nor is it the underlying point he is trying to make, the way some of his points comes across could leave that image in the mind of the reader. While it is indeed God who works and God’s Word that has the power, we are called to declare that Word and to live a life of holiness. As you read this book, be mindful that a lack of action is not the point Horton is trying to drive home. Arguably though, it might seem that way at some junctures of this book. Ordinary is by no means a call to laziness. It is instead a call to return to a more fundamental biblical approach to the Christian walk.

Another issue I had a bit of a problem with was Horton’s discussion of infant baptism. Horton notes “The children of believers are holy, set apart by God’s promise, although some will reject their birthright.” He further notes the seal of this covenant promise “was circumcision in the old covenant, given to males only, and is baptism in the new covenant, received by males and females.” It appears this suggests the need for infant baptism which in my humble opinion should better be described instead as dedicating your child to the Lord, or  being immersed in the waters of baptism, something I believe Scripture reserves for those who have clarity and understanding of what that signifies. I am not a paedobaptist which drives my point of disagreement. With that said, Horton’s purpose in being up that subject is admittedly not to make an argument for paedobaptism, but rather to note that evangelism should be something the Church focuses on regardless of the age of the recipient, namely a “lifelong process of growing and deepening repentance and faith in Christ.” Perhaps Horton could have chosen another example to use other than paedobaptism to drive home that point.

There is much to appreciate and like about this book. I highly recommend this book to all believers, especially those who make find themselves caught up in the search for the next big thing or the next big persona on the Christian theological or preaching scene. We are called to be in the trenches of the world, fighting the good fight, preaching the Word, and living in holiness. What for some that may seem ordinary and outdated, it is nevertheless the life we have been called to by God, and Horton does an excellent job of reminding God’s people to live a “sustainable faith in a radical, restless world” so often caught up in selfish ambition.

Buy the book at Ordinary: Sustainable Faith in a Radical, Restless World

, WTS Books or through Zondervan by clicking here.

I received this book for free from Zondervan for this review. I was not required to write a positive review. The opinions I have expressed are my own. I am disclosing this in accordance with the Federal Trade Commission’s 16 CFR, Part 255 : “Guides Concerning the Use of Endorsements and Testimonials in Advertising.”