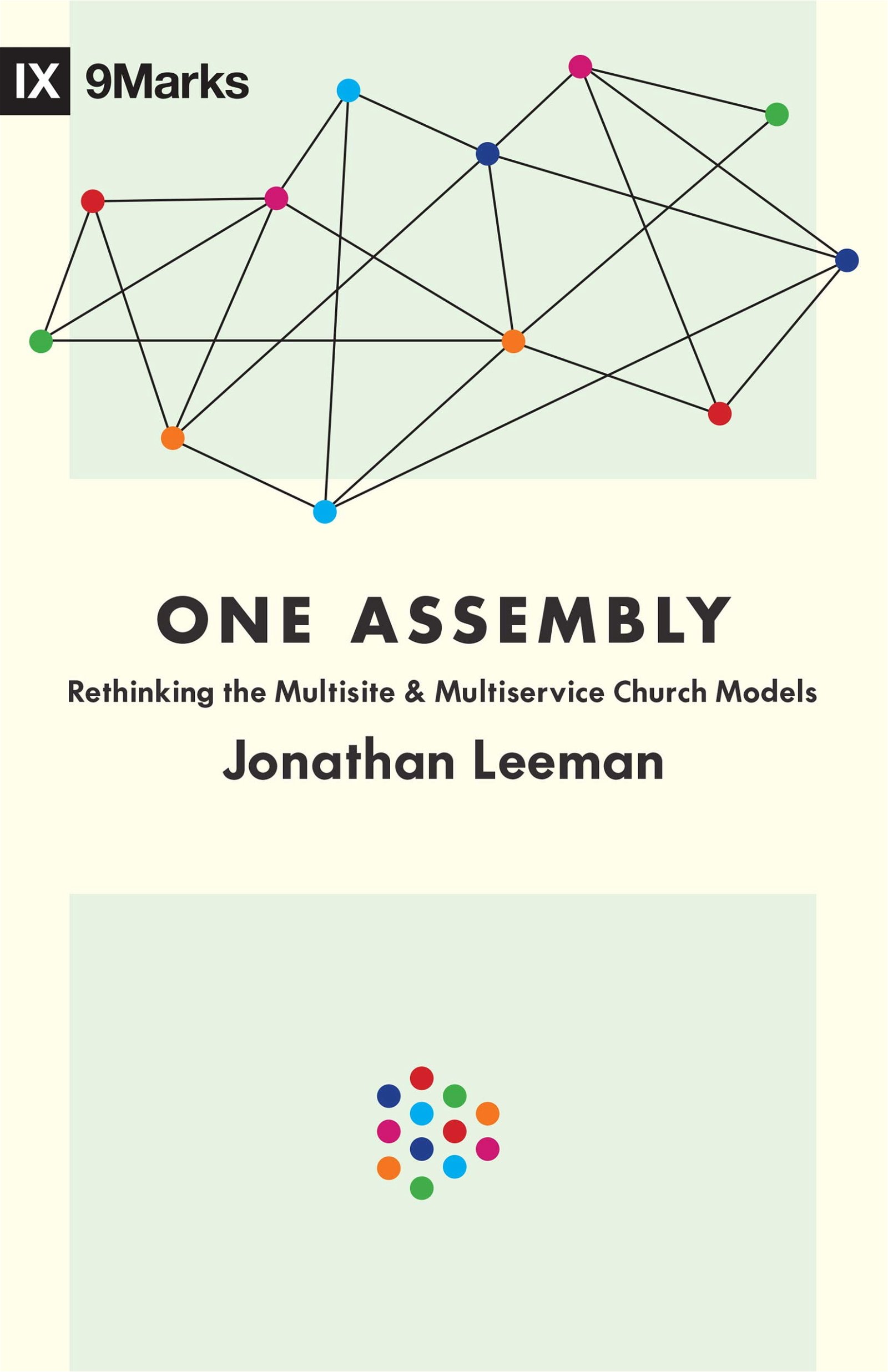 One Assembly: Rethinking the Multisite and Multiservice Church Models by Jonathan Leeman

In the past few decades, the Western church has seen a drastic rise in the number of megachurches. Along with the rise of megachurches has come a rise in the number of churches going to multiservice and/or multisite models of ministry, which has happened so rapidly that no one has really stopped to think about the biblical nature of this ministry model. In his new book One Assembly, published by Crossway, Jonathan Leeman argues that the multiservice and multisite approach may not be the most biblically faithful model of local church ministry.

Leeman makes a compelling argument for a “one assembly” church. His basic argument is that the most biblically faithful model for the local church is to hold one Sunday gathering as a congregation because that is what is seen in Scripture—leaning heavily on biblical texts and scholarship on the subject. He makes his argument in a scholarly yet approachable prose. He makes his first point in chapter one that each local church makes visible the invisible reality of the universal body of Christ. It would be impossible for all believers around the world to meet together as one. However, each local church provides an opportunity for members of the universal church to meet together locally for prayer, worship, preaching, and encouragement.

In chapter two, Leeman makes the argument that the local church is an assembly. For this chapter, he leans heavily on biblical texts as well as Greek/English lexicons to make his point. His main argument in this chapter is that the Greek word ekklesia connotes the idea of an assembly or gathering. The universal church of Christ is an already/not yet reality. Therefore, each local church is an expression of that reality. Leeman argues that the local church has the authority to assemble together under the authority of Jesus alone. What makes a church a church is not the pastor, leaders, polity, budget, or a board of trustees. What makes a church is the coming together of the redeemed people of God in a certain place. This picture of the local church is compelling. It makes the church more than an event or a non-profit organization. It shows the church as the family of God meeting together under Jesus, the head, in full submission to Him.

In chapter three, Leeman makes the argument that each local church should be catholic, or universal in mindset. By this, he does not mean that all churches must be Roman Catholic or even connected together in a formal hierarchy. In stating that local churches should be catholic in mindset, all churches in a community should work together by seeking the good of the community. He gives the example of a larger church not located near a local college wanting to reach college students. Instead of deciding to open a campus of their church near the college campus, Leeman argues that it would be better to work with another church that is located near the college. This could look like sending a group of people and resources to the other church to help them reach college students with the gospel. He also argues that if a church gets too large for their facility, it would be best to encourage members to join a church that may be closer to their home or to help start a new church in an area where one is needed. By having this mindset, a local church puts kingdom advancement as their main mission.

Personally, I find Leeman’s argument in One Assembly to be compelling. As one who has been in church planting in the past, I saw first hand how churches in my target area were not very interested in working together to reach our community. Instead, they worked against one another in an effort to see their individual congregations grow. In a world that is growing more hostile to religion, particularly in the West, churches must work together for the sake of the gospel. This book should be required reading in seminary classes on church polity/administration. It is a must-read for all pastors and church leaders. The church needs to be the church, and this book is a great resource to help guide the way.

On today’s episode, a listener writes in and asks me, “Why is theology for all of life?” What you’ll hear in this episode Theology is for the Worship of God. Theology is for Service. Theology Helps Christians Mature in Christ. Theology Is for All of Life...

A Review of Wondrous Works of God: A Family Bible Story Book

Wondrous Works of God: A Family Bible Story Book, by Starr Meade is a well written and a nicely illustrated (by Tim O’Connor) storybook. It has many thoughtful questions and promptings for families to use during Bible study time. As someone who has a young nephew, I...

They Could Not Endure

Hebrews 12:20–21, “For they could not endure the order that was given, “If even a beast touches the mountain, it shall be stoned.” 21 Indeed, so terrifying was the sight that Moses said, “I tremble with fear.” One of the prevalent themes of the epistle to the Hebrews...