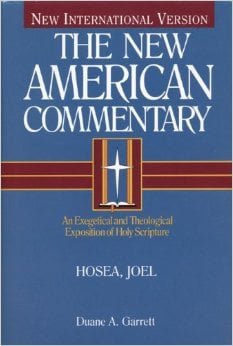 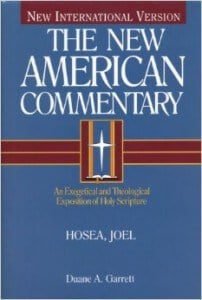 The Old Testament prophetic books of Hosea and Joel are likely not at the top of the average believer’s reading list. That reality is quite unfortunate given both books contain valuable truths that are as important for us today as they were for the original hearers of the prophets declarations. Duane Garrett, as part of the respected New American Commentary series, has provided valuable exegesis and insight into the books of Hosea and Joel.

The New American Commentary series is one I have utilized quite often over the past year as I have dug deep into Old Testament books such as Ruth and Song of Solomon. In particular, I have found Duane Garrett’s efforts to be quite impressive, in particular his ability to flush out certain issues of the text in a manner that is both scholarly and accessible.

The format of this commentary is the same for both Hosea and Joel. Garrett begins each section with an outline to each book, a discussion of the title and the book’s overall place and function in the canon of Scripture, matters of textual importance such as the date and authorship, the genre and intent of the book, important themes and purpose to include specific elements and matters of theological important addressed in each respective book, the structure of the book, followed by the actual exegesis and analysis of the text itself which is also broken down into the individual elements of the text. A selected bibliography, subject, person, and scripture index are also provided, things which help the reader focus on certain elements of these books they may wish to focus.

When it comes to reading Hosea, Garrett rightly notes “Hosea is not an easy book. It begins with a prophet receiving a command to marry a prostitute and promptly describes the births of his three children, each of whom is given a bizarre but significant name.” For myself, these facts alone make this book rather interesting, if nothing else than to try and glean why God had Hosea do these things given that God never has someone do something for no reason at all. Furthermore, throughout Hosea are some rather striking images and Garrett does an excellent job of explaining the importance of that imagery in relation to the text.

Hosea is a book that is focused on fidelity. God commanded Hosea to marry a prostitute and to name His children those bizarre names to demonstrate to the people of Israel the extent of how they had strayed from their relationship with Him. Garrett saliently notes “The reason for God’s astonishing command to Hosea is that the land is guilty of the vilest adultery in departing from the Lord. In other words, God specifically tells Hosea to enter into the same kind of marriage that Yahweh himself is in. Hosea is to experience the sorrows of God and thus speak in God’s place to the nation.” Israel had literally prostituted herself to other gods, thus not remaining faithful to their betrothal relationship with their God.

I appreciated Garrett’s explanation of God’s promise in Hosea 2:19-20 that He would betroth His people to Himself forever. This marriage process is quite lost on the modern mind and the meaning of what it entailed needs to be stressed. Thankfully, Garrett provides the reader with some valuable insight into what God was saying to His people. Garrett rightly comments “This is no mere re-establishment of the covenant rights of Israel; It is the beginning of a relationship of love between God and his people such as they had not known before. It is a new covenant.” Furthermore, Garrett avers “In the analogy of betrothal Yahweh gives righteousness, justice, love, and compassion as the bride-price, the means by which he obtains his bride.” This was truly an act of God given the people clearly could not remain faithful on their own merits. In this new covenant, we are betrothed to the Bride (Christ). I this relationship, we know God in an intimate way. Garrett brilliantly notes “The goal of god’s wooing of the people, and the point of the whole text, is that they should know him. To know God implies the deepest relationship with him.” Hosea reveals God’s desire for that relationship.

Joel is another book that has its own bit of interesting texts. Garrett ably comments “On the one hand, its interpretation is hotly disputed…On the other hand, Joel draws in its short three chapters (four in Hebrew) a detailed picture of how the prophets presented and understood divine judgment, apocalyptic events, and the future of the people of God.”

Arguably, Joel 2 is among the most hotly debated portions of Joel. Is the locust army a continuation of the plague in chapter 1 or is this an entirely different judgment? Furthermore, if this is a new judgment, is it depicting a past or future event? Garrett correctly states “Joel used locust imagery to shape the picture of the invading army. Looking upon the locust swarm, he saw with prophetic insight not just locusts but a mass of human soldiers bearing down on his city, and he described this future army in locust-like terms. It would indeed be strange if Joel, prophesying immediately after a locust plague, had described the human army without allowing the locust analogue to influence his language. Both are armies of the Lord.”
I highly recommend this commentary for pastors, Bible College and Seminary students, as well as laymen. Garrett ably exegetes the text with great skill, carefully examining what God has to say to us in these two important prophetic books. Honing in on the underlying prophetic declarations of judgment and redemption, this commentary is an excellent addition to any believer’s library and demonstrates the overall excellence of the New American Commentary series as a whole.