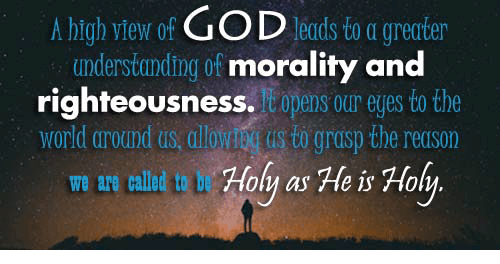 Morality and a High View of God

by Dave Jenkins | Jan 12, 2017 | Featured, The Doctrine of God: Eternal Creator and Redeemer

Dr. Martyn Lloyd-Jones, one of the greatest preachers and theologians of the 20th century, taught that a high view of God leads to a high view of Jesus. Popular culture flaunts its belief that man, in all of his glory, is the beginning and the end of all things. The Bible does not begin with man, but rather with God and His work of creation. The Bible continues by teaching man about God’s work of redeeming man from his sin. Furthermore, the Bible stands in judgment of men; never do men stand in judgment of the Bible.

How important is a high view of God and Jesus? Since the Bible begins with God and ends with God, then it is vitally important that we have a proper understanding of God Himself, so that we might know who He is and what He is like. Dr. Harold Bergman, professor of law at Harvard University, in his book, The Interaction of Law and Religion, notes that one cannot have workable rules for behavior without religion, because only religion provides an absolute base on which morality and law can be based. In other words, what Dr. Bergman is arguing is that western society is doomed to relativism in law because of the loss of absolute. He explains that when men break away from the idea of an authoritative religion, and even from the concept of God, they break away from the possibility of absolute truth. Their only remaining source is a slippery, unstable, and ever-changing base on which no authoritative system of law or morals can be built. Religionless law can never command law.

When God is abandoned, the truth is abandoned; and when truth is abandoned, the basis for morals and law is abandoned. A consistent, coherent legal system cannot be based upon philosophical humanism, on the principle that right and wrong fluctuate according to man’s ideas and feelings. If there is no religious absolute there can be no basis for real law. People will not respect or long obey laws that are only judicial guesses. An evil, godless society, floating about on a sea of relativism, realizes that it has no foundation, no anchor, and no unmoving point of reference. Law becomes a matter of preference and order a matter of power. A democracy where power is ultimately vested in the people is particularly vulnerable to chaos.

Is there an absolute basis for truth, for the law, for real right and wrong; and if so what is it? Those questions are the essence of what Jesus teaches in Matthew 5:17-20. The absolute, He says, is the law of the eternally sovereign God. God has laid down His absolute, eternal, abiding law and made is known to men. And as God’s own Son, Jesus declared unequivocally that He did not come to teach or practice anything contrary to the law in even the slightest way, but to uphold it entirely.

The argument is also proposed that Scripture is but a collection of various men’s ideas about God and about right and wrong. One person’s interpretation of the Bible is therefore just as good as another’s, and there is no place for dogmatism. Men have been left free to believe or not to believe, to follow or not to follow, any or all of Scripture as it suits them. Each person becomes his or her own judge over Scripture and the end result is to disregard it altogether.

It is impossible to take Jesus seriously and not take Scripture seriously. It is impossible to believe Jesus spoke absolute truth and not to consider Scripture to be that absolute truth, because that is precisely what Jesus taught it to be. If Jesus was mistaken or deluded on this point then there would be no reason to accept anything else that He said. At the outset of His ministry He makes clear that His authority and Scripture’s authority are the same; His truth and Scripture’s truth are identical and inseparable.

God’s revealed Word, Jesus says, is not only the truth, but is truth conceived with absolute, inviolable authority. It is in and with the authority of His Word that He came to teach and minister, and it is through that authority that He commands His Kingdom citizens to bow and obey. For thirty years, Jesus lived in privacy and obscurity. Only Mary and intimates to the family would have remembered the miraculous events that surrounded His birth and early years. As far as His friends and neighbors were concerned, He was but a unique Jewish carpenter. It was when He began His ministry, when He was immersed in the Jordan River by John the Baptist and started to preach, that all eyes suddenly turned to Him. At that point, even the leaders of Israel could not ignore Him.

Jesus’ meekness, humility, gentleness, and love marked Him out in great contrast to the proud, selfish, and arrogant scribes, Pharisees, Sadducees, and priests. His call to repentance and His proclamation of the gospel made people listen, even if they did not understand or agree. They wondered if He was just another prophet or a false prophet. They wondered if He was a political or military revolutionary who might be the Messiah they anxiously awaited, who would break the yoke of Rome. He did not talk or act like anyone else they had ever heard or seen. He did not identify Himself with any of the scribal schools or with any of the sects or movements of the time. Nor did He identify Himself with Herod or with Rome. Instead Jesus openly and lovingly identified Himself with the outcasts, the sick, the sinful, and the needy of every sort. He proclaimed grace and dispensed mercy. Whereas all the other rabbis and religious leaders talked only about the religious externals, He taught about the heart. They focused on ceremonies, rituals, and outward acts of every kind, whereas He focused on the heart. They set themselves above other men and demanded their service while He set Himself below other men and became their Servant.

Having a high view of God and of the work of Christ relates to morality because how one views God will affect how he/she lives. How one understands the work of Christ will affect whether he/she will go to heaven or hell. Furthermore, understanding morality and God is important in order to have a biblical understanding of marriage, gender roles, and more. In other words, morality must be dictated by the Word of God because man left to his own devices has proven that they are destructive and unworthy due to his sin and sin nature.

Lastly, the Bible makes it clear that when man walks his own path, he walks the way of the fool not the path of righteousness (Psalm 1:1; Proverbs 10:9; Proverbs 12:15). The only way to be moral is not by thinking one is a good person or defining oneself by one’s good deeds. Basing one’s identity, worth, and value on how good one is or on how great he/she has performed is not a basis for evaluating moral behavior. The gospel is God means of evaluating man’s moral behavior. The gospel addresses man’s desperate state and provides the solution to man’s sin with the promise of reconciliation to God through the death, burial, and resurrection of Christ. The only hope for man to be moral and for man’s behavior to change is not through good works, but by believing in and on the works of Christ in His death, burial, and resurrection.

This article first appeared in Theology for Life Winter 2016-17 Issue. To download the rest of the issue click here.