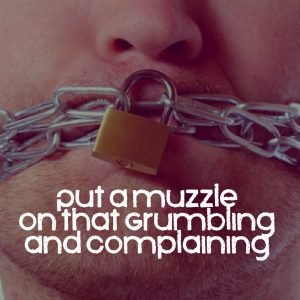 Put a Muzzle on that Grumbling and Complaining

Philippians 2:14, “Do all things without grumbling or questioning,”

Ephesians 4:29, “Let no corrupting talk come out of your mouths, but only such as is good for building up, as fits the occasion, that it may give grace to those who hear.”

Stop complaining and just do what you are told!

Admit it. How many times were you told that as a child or for those who have children, how many times just in the past week have you told your own children that exact thing? Quit grumbling. Quit the backtalk. Do what you are told and all will be well.

As adults, one would think we would have reached a certain level of maturity after the ten thousand times of being scolded by our own parents to not complain. Sadly, complaining and grumbling is part and parcel of everyday life. A sad but true fact.

Over the past week, events at my job have reached a fever pitch with certain decisions being made for which I highly disagreed. Ten dollars to the first person who guesses what my response was to those decisions. We have a winner! Yes, I grumbled, complained, murmured, and groaned rather endlessly. Did it change anything? Absolutely not as those decisions still stood and guess what? Life actually moved forward and the earth continued to rotate despite my fervent and repeated protestations.

There is certainly room for disagreement as we are not called to be like carpets, walked all over endlessly. Honest discussion within the framework of civil and useful discourse should be encouraged. With that said, typically our mumbling, groaning, and complaining is a result of being told something we should do or experiencing an event or series of events that grate at our sense of pride as well as our perception of what should take place.

Many times, especially in the work environment, our complaints are rooted in a lack of understanding of the greater picture. We may think we know the best route to take; however, more often than not, decisions are made based on a more corporate mindset from those who are able to better grasp the larger goal of the organization.

In the family setting, our complaints are often rooted in our own wants and desires getting in the way or just that age old lack of proper communication. Again, we think we may know what the other party wants or is saying, but that logjam of grumbling gets in the way of fully understanding the greater picture.

As I was pondering my own recent penchant for digressing into the morass of complaining, I was reminded of the Apostle Paul’s words in Philippians 2:14 and Ephesians 4:29 as well as some Old Testament examples of what took place when the children of Israel began to murmur and complain. Let me cut right to the chase and state that in every instance where people grumbled and complained, nothing good came about as a result. In fact, Number 11:1-3 provides a fine example of what happened to some people in Israel who felt the need to grumble and complain against the Lord:

Now I am not sure that fire from heaven will immediately come down from heaven and consume you if you let out a complaint against your supervisor at work or if you complain about your wife not folding the laundry. What incessant complaining and grumbling do is provide the means for a root of bitterness to take hold. Hebrews 12:14-15 instructs us to, “Pursue peace with all men, and the sanctification without which no one will see the Lord. See to it that no one comes short of the grace of God; that no root of bitterness springing up causes trouble, and by it many be defiled;”

In the passages we have looked at thus far, we can begin to see a pattern of behavior that must be engaged in order to avoid grumbling, complaining, and murmuring. Let’s take a quick look at some ways in which we can avoid such destructive actions in favor of a more biblical response to the issues that really “irk” us.

The word corrupt is a rather interesting word in the Greek. It is the adjective sapros which means “rotten or putrefied.” Ponder that for a minute. Those grumbling, complaining and murmuring words you find yourself spouting are nothing more than rotten and putrefied speech. No wonder Proverbs 14:30 calls this lack of tranquility rottenness to the bones. The old saying goes, “If you do not have anything positive to say, do not say anything at all.” There is great wisdom in that statement and it is certainly supported by Scripture.

When we wash daily in the Word of God with the Holy Spirit writing God’s Word on the very tablets of our hearts, we are replacing such ungodly desires and behaviors with the holy Word of God. When we consume ourselves with the truth of Scripture, that desire to murmur and grumble will be replaced with the medicine prescribed in God’s Word, namely the fruit of the Spirit.
Furthermore, it is necessary to spend devoted time in prayer, asking God for help to quench the desire for murmuring, grumbling, and complaining. Instead of crying out in anger, cry out to God for His divine assistance to replace that spirit of bitterness with a heart of love and compassion.

The next time your boss, wife, child, or friend does something that really irks you or that you disagree with, remember the example set for us by Jesus – “He was oppressed and He was afflicted, Yet He did not open His mouth; Like a lamb that is led to slaughter, And like a sheep that is silent before its shearers, So He did not open His mouth” (Isaiah 53:7). Jesus was crucified, beaten mercilessly, and died on our behalf and did not utter one word of complaint. If He was willing to do that for us, why do we more often than not engage in murmuring and complaining about things of such a trivial nature? That is a question we must all ask ourselves as we seek through the work of the Holy Spirit to uproot bitterness and complaining in our lives. Get out your spiritual shovels….it is time to start some digging!