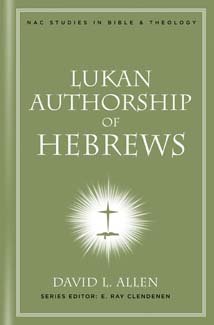 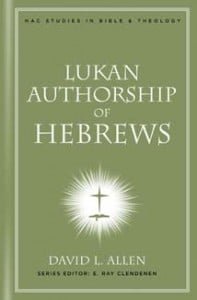 Who penned the book of Hebrews has long been a source of debate among scholars and layman alike. Was it the Apostle Paul? Was it Apollos? Was Barnabas? Was it Luke? Was it even Priscilla? While Hebrews shares some commonalities with other Pauline books, there is just enough difference between the book of Hebrews and his other writings to cause, at least in the minds of some to question the traditional belief of Pauline authorship. David Allen, in his book Lukan Authorship of Hebrews suggests the author of Hebrews was not Paul but rather it was the work of Luke, that faithful companion of Paul and author of the Gospel of Luke and Acts.

There are likely many who wonder why there is even the need to debate on who the author of Hebrews is given it is in the canon of Scripture and that should settle things. While there is some validity to such a position, understanding who the author is provides some level of insight into particular mannerisms of an author and how they reveal themselves in their works. Such perspectives can provide valuable insight into particular aspects of a work that become clearer when understood in relation to the author’s writing tendencies.

Allen begins his proposition by noting the history of the question on who wrote Hebrews. I was surprised at the chart in this chapter that noted the variety of authorial proposals given by scholars throughout the centuries. Allen also provides a very interesting historical overview of the positions taken by scholars on the authorship of Hebrews. He notes that in the Western Church, “no tradition regarding Pauline authorship apparently existed. Rather, in the late second and early third centuries, Tertullian believed the letter had been written by Barnabas.” As we move forward into the Middle Ages and the time of the Reformation, the variety of positions continued to include Luther averring that Apollos was the author with Calvin suggesting Luke or Clement of Rome. This historical journey on the authorship of Hebrews by Allen certainly reveals that Pauline authorship was not a given in the minds of many scholars, thus leaving open the possibility of Lukan authorship, something he digs deeper into in the remainder of this book.

There are many interesting arguments posed by Allen for Lukan authorship. Given Hebrews is a document, I think the most compelling array of evidence Allen presented revolved around the linguistic support for Lukan authorship of Hebrews. He rightly notes that “The obvious point of departure in any study of authorship is the language of the text itself. Barring clear external, historical testimony regarding authorship, comparisons of the unattributed work with a suspected author must begin at the linguistic level.” Since there is truly no clear historical testimony regarding the authorship of Hebrews with instead a variety of positions given through the years, linguistic evidence is definitely a place upon which one can make their case and Allen does so quite well in my opinion.

After identifying similarities between Hebrews and other books of the New Testament such as Mark, the Petrine Letters, and John, Allen examines the similarities between Luke-Acts, Paul, and Hebrews. He notably comments “The large number of words unique to Hebrews and Luke-Acts is striking.” Even a cursory glance at the tables provided by Allen that note the unique words to Hebrews and Luke-Acts is quite revealing. Allen does readily admit there are also similarities between Hebrews and the Pauline letters. He attributes this to the fact that the “lexical as well as historical evidence supports the contention that Luke was a contemporary of Paul and part of the Pauline circle. If Luke were indeed Paul’s traveling companion and a close associate for many years, the lexical similarity between Luke and Paul is not surprising. In fact, we might be surprised if their vocabulary did not greatly overlap, considering they shared the same experiences of travel, imprisonment, difficulties, and triumphs over a period of years.”

Another interesting position posed by Allen is the similarity of the prologues of Luke, Acts, and Hebrews. He notes they share the same length, they reveal a common literary skill, they are both “retrospective and prospective”, there is the “propensity to alliterate with the Greek letter p in all three prologues”, the absence of de and kai notes a high Classical Greek form of writing, the format of the prologues are similar, and the words used in the prologue of Hebrews bear a striking resemblance to the writings of Luke. Others comparisons are provided by Allen that are equally interesting, such as that of Acts 7 and Hebrews 11. The evidence at least is quite compelling and Allen provides quite a bit of facts to support his theory.

I also found the theological comparisons between Luke-Acts and Hebrews to be of great interest. Luke has often been viewed as a Gentile and thus the opinion has been that Luke-Acts was “of Gentile provenance.” Allen avers “As the image gradually appears and the features become more distinct, one begins to see Luke the Jew rather than Luke the Gentile, and the shadowy auctor of Hebrews resembles more and more the author of Luke-Acts.” Issues such as the Christology and eschatology found in Luke-Acts and Hebrews are discussed by Allen with again some rather convincing arguments being presented. For instance, the “lexical pair archegos and soter as titles for Jesus occur together in the New Testament only in Acts 5:31 and Heb. 2:10.” Moreover, “The Lukan use of curious, “Lord,” as a reference to God is found frequently in Hebrews, but infrequently in the Pauline letters.” These are quite interesting pieces of information that when put together, certainly make a strong case for Lukan authorship.

As Allen notes in the conclusion to this book, “The cumulative effect of the evidence implicating Luke is substantial.” Whether the evidence presented by Allen in this book is convincing enough to tilt the weight of thought from Pauline authorship to that of Luke remains to be seen. I will submit that Allen provides a substantive, scholarly, and well thought out case for his position that should if anything, be given consideration.

I highly recommend this book for anyone who has ever wondered who wrote Hebrews. The opinions are many as noted by Allen and his effort to support the theory of Lukan authorship is well worth the read. I certainly enjoyed his thoughts on the matter and will give his position some greater thought. There is much to read and learn in this book and I only covered a small portion of what Allen has to say meaning this book will provided much food for thought for those who take the time to dig into what Allen presents. Even if you ultimately disagree with his premise, in the course of reading this book, you will have learned much about Luke, Acts, Hebrews, and the New Testament in general.