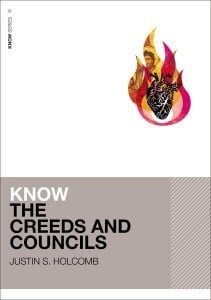 Know the Creeds and Councils

Understanding the history of the Church is an important element of the faith. Digging into the past, while for many is often viewed in a negative light as being dull and boring especially when it comes to reading about church councils and creeds, is nonetheless vital. Its importance resides in the need to have a firm grasp on what it is we believe, how such beliefs were developed throughout church history, the issues that were being dealt with by the various church councils and the subsequent establishment of the creeds, and how all that applies to our lives today. Justin Holcomb in his book Know the Creeds and Councils which is part of the continuing Know series from Zondervan, provides the reader with a helpful primer that brings to life these important aspects of church history.

I will readily admit that during Bible College and Seminary, church history classes were not my favorites. While the events of history were interesting, I often wanted to move forward to the study of more theologically related matters. What I failed to realize at the time and what was brought to light in Holcomb’s excellent book is that the importance of church history, in particular the development of creeds and the firming up of sound doctrine in the face of heresy, cannot be overlooked. As these heresies of the past were addressed, it forced the church to solidify her stance on a number of key theological issues, the very issues I wanted to move forward to study. It was those earnest efforts of men of God who were leading the church in the past that continues to influence how the firm foundation of theological truth we stand upon today.

Holcomb engages seven different church councils and six different creeds or statements of faith. Some of these councils and creeds are more well known that others but all are important to study and understand. His intent is not to provide an exhaustive excursus into every single element of these councils and creeds. Conversely, his goal is to help familiarize believers with the overarching intent of the councils, the issues they addressed, why the councils were important, and their lasting impact on us today. Additionally, his goal with the creeds he discusses is also not to dive into every nuance of theology them address but rather to help the reader understand why they were created and as with the councils, why they continue to have relevance for us today.

For example, the Council of Chalcedon was important because it “dealt specifically with the two natures of Jesus Christ.” At the time, this continued to be a rather large issue for the church as various heresies continued to try and gain popularity such as Nestorianism and Eutychianism. In speaking to the relevance of this particular council, Holcomb aptly comments “it might be helpful to think of Chalcedon as a way to correct extremes in our thinking. Because we sometimes fall into the trap of thinking that Jesus is spiritual and far removed from us, it can be comforting to remember that he is really human.” Holcomb also rightly notes that at this council, not everything that was decided upon can be asserted as entirely theologically correct. In fact, many believed the definitions established at Chalcedon were too Nestorian in nature and others felt the issue of whether Christ had one or two wills was left unanswered. What we can take away from this council is what Holcomb saliently notes, namely the fact “it guides the discussion between two heresies and helps us understand what Scripture says about Jesus Christ, God’s own son and the son of Mary.”

Another example of the helpful information provided by Holcomb in this book is his treatment of the Westminster Confession of Faith, arguably outside of the Apostle’s Creed, one of the more familiar creeds and statements of faith. The importance of this confession resides in the reality that the “Westminster Assembly clearly understood that practice could not be divorced from the actions of the laity. The confession puts its heart into making the implications of this theology understandable rather than repeating a set of ideas.” Perhaps what makes the Westminster Confession of Faith so useful even today is the great care the Westminster Assembly took to compile a set of Scriptural proofs for each statement of faith they developed. As Holcomb so rightly states, “the Westminster Confession remains relevant as one of the most significant statements of faith for the Protestant tradition” because it strove to maintain a needed connection with previous creeds of the church such as the Nicene and Chalcedon creeds.

For anyone desiring to have a greater understanding of the major church councils and confessions of faith, Holcomb’s effort is a fine place to start. It is highly accessible, historical in approach without getting too far into the weeds of the events that took place, and most importantly it helps the reader gain a solid connection and appreciation for these councils and creeds, driving home again and again why these events and statements of faith remain important elements of the faith. I highly recommend this book for all believers for it is a valuable reference tool for understanding the creeds and councils.

This book is available for purchase from Zondervan by clicking here.