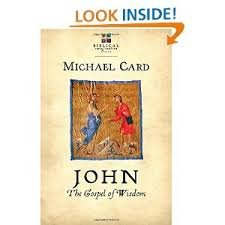 John: The Gospel of Wisdom

The Gospel of John has long been a favorite of scholars and layman alike. Somewhat different in scope and focus than the other Gospels, it begins with a reminder of who Jesus is, namely the Word who is God and who has always been, the logos. Furthermore, the Gospel of John is often the first book of the Bible, except perhaps for the Psalms or Proverbs, that many new believers gravitate towards or are encouraged to read in their initial forays into Scripture. In the final installment of his Biblical Imagination Series, noted musician and author Michael Card engages this beloved Gospel in his book aptly titled John: The Gospel of Wisdom.

Michael Card definitely has the gift of writing. This gift has long been demonstrated in the lyrics to his long and distinguished Christian music career. His ability to put pen to paper in a way that is scholarly yet accessible and that captures the true overarching message of the Gospel of John is also quite evident in this final volume of the Biblical Imagination Series. Card captures the attention of the reader, bringing them into the world of the biblical author while never failing to drive home the biblical concepts and principles found in John’s Gospel.

As with the other volumes in this outstanding series, Michael Card begins his discussion with the necessary background information regarding the Gospel of John. A unique element found in the Gospel of John is the underlying theme of wisdom, an approach not found to a large degree in the other gospel accounts. Card aptly notes, “In fact, the inadequacy of wisdom is the fundamental theme of John’s Gospel. Jesus is more than simply the Wisdom of God, he is the one who is constantly and consistently misunderstood…Jesus will posit himself as the answer only in John’s Gospel, via the “I am” sayings.” This repeated misunderstanding by those who came in contact with Jesus leads to the cross where as Card comments, “he is all alone” and where he suffers for the sins of humanity.

An important element of the Gospel of John which Michael Card saliently exegetes for the reader is the concept found in the Greek word logos. John 1:1 declares “In the beginning was the Word, and the Word was with God, and the Word was God.” Logos is the term translated as “word” and it is a term that hearkens back to the message of the Old Testament, in particular the opening chapters of Genesis. In John’s day, an early form of Gnosticism known as Docetism was starting to take hold within the early church. This heresy promoted ideas about logos that were rooted in the teachings of Heraclitus. As Michael Card avers, the logos John noted in his gospel had nothing to do with the Greek pagan philosophical view of the term. Conversely, “When John says “word”, it is not the Greek logos but the Old Testament Hebrew dabar he has in mind. Dabar means both “word” and “deed.” When God says something, it happens.” With that in mind, it is perfectly clear why John notes that when Jesus made a declaration, what he declared happened for he is God, the logos.

Another outstanding discussion point focused on by Card in this book is the “I am” saying of Jesus where he declares “I am the bread of life.” As with the other “I am” sayings, this was no small or minor statement by Jesus. This self description is rooted in the Hebrew word manna, a word Card correctly notes was a “reflection on how puzzled the Israelites were when they first say the mysterious honey-flavored wafers God provided in the wilderness.” When the people of Israel asked for the bread Jesus claimed he would be able to provide, they were quite clueless that it was not physical bread he was describing. Rather than the manna provided to their forefathers to stave off physical hunger, Card notes Jesus was declaring “He will satisfy their hunger forever.” After the people murmured and grumbled due to their spiritual blindness, Jesus once again reiterated the “I am the bread of life” self-description. To this Card comments that as Jesus continued to drive home this point, it became a rather scandalous event as the people continued to misunderstand what Jesus was trying to get across. In fact, Card rightly avers “It is not the flesh that counts but the spirit. He has been speaking life-giving words. John whispers from the beginning Jesus knew who would believe and who would not, who would stay despite his scandalous words and who would go. No one can come unless the Father makes it possible.” Many walked away but those who remained were those who were called by the Logos, the Bread of Life.

I truly enjoyed every aspect of this commentary on the Gospel of John. Michael Card has a very engaging writing style, he expertly weaves scholarly insights with practical discussion that brings the Gospel of John to life for the reader. I highly recommend this volume for all believers and I also highly recommend the entire Biblical Imagination Series. These commentaries will help pastors, theologians, and layman alike grow in love and appreciation for the message of the Gospels.

This book is available for purchase from InterVarsity Press by clicking here.

I received this book for free from InterVarsity for this review. I was not required to write a positive review. The opinions I have expressed are my own. I am disclosing this in accordance with the Federal Trade Commission’s 16 CFR, Part 255 : “Guides Concerning the Use of Endorsements and Testimonials in Advertising.”