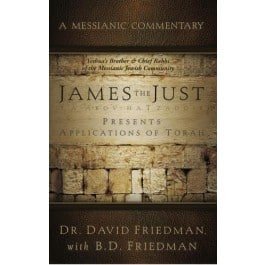 The Epistle of James has long been a beloved book in the New Testament. Speaking on issues of daily life, this book is treasured for its practical discussion on matters such as the tongue, faith, and living out the Christian walk with a mindset of holiness. With that said, some aspects of this book are challenging, particularly James’ discussion of faith and works and how his exhortation on such matters relates to the Apostle Paul’s own statements on those very topics. Looking at the Epistle of James from a Hebraic perspective, Dr. David Friedman sheds some interesting light on the purpose and message of James in his helpful commentary James the Just.

Dr. Friedman proposes the possibility that the Epistle of James is actually a yalkut, “a collection of highlighted teachings by a rabbi, often collected by his students.” Such a proposal is based on the content of James in comparison to the typical yalkut, specifically the reality that James provides practical points on how to live righteously devoid of philosophical discussion while denoting the need to be obedient to God’s commands provided in His word. Such points of discussion are indeed found in a yalkut thus presenting an interesting departure point for examining James. Interestingly, Dr. Friedman notes “The subjects that are taken up in James are the same ones that are taken up in Leviticus 19-22, which today constitutes a single Sabbath reading that is done each year in late winter.” Thus, to best understand James, one must approach it from the perspective the original hearers/readers would have, namely in the viewpoint that James is elaborating and affirming long held torah centric principles with torah centric meaning the instructions provided by God throughout Scripture for what is defined as righteous living.

The majority of Dr. Friedman’s commentary is centered on outlining what he believes are the torah based concepts found in the Epistle of James, or perhaps better termed the yalkut of James. Dr. Friedman rightly notes “The book of Ya’akov is written in Koine, that is, the Second Tempe era, Greek lingua franca uses across the Mediterranean world.” With that said, the principles James presents are not founded in Hellenistic ideas but rather are firmly rooted in “the first century Jewish world” and as such, must be understood from that perspective.

For example, Dr. Friedman points out that in James 1:17 we find the phrase “the Father of lights” used to describe God the Father. The Greek denotes the biblical view of God rather than “the Hellenist pantheism or philosophy.” In fact, this phrase hearkens back to Psalm 118:2 which states “God is Adonai, and He will shine light for us…” Another example of the Hebraic viewpoint found in James is outlined by Dr. Friedman in James’ admonition to “Not merely listen to the word, and so deceive yourselves.” Such a statement is also rooted in the Old Testament as well as within rabbinic teachings, specifically in regards to the action required of God’s people such as visiting the orphan and widow. Dr. Friedman rightly notes such a command is reflected in Exodus 22:22.

After establishing his premise that James is rooted in torah (God’s instructions) and would have been something readily understood by his readers/hearers, Dr. Friedman tackles the often thorny issue of the faith/works dynamic outlined in the Epistle of James. Some scholars aver that James and Paul provide conflicting teaching on the relationship between faith and works. Since Scripture cannot conflict with itself, this demands that the proper understanding of the faith/works dynamic must be something that is perfectly and internally consistent. Dr. Friedman first analyzes the terms of works, action, and deeds by looking at the Septuagint. After a lengthy and informative analysis of these terms, Dr. Friedman aptly comments “to the translators of the Septuagint, ergon/erga (the word translated as works) denotes some type of activity or action. Thus, when James outlines works, it is under the umbrella of actual actions that were to be part of the Christian walk as a demonstration of one’s faith in God and obedience to His word. Furthermore, Dr. Friedman saliently notes “the delineation between faith, as one entity and the carrying out of scriptural commands, as another and opposing entity, is a theologically imposed delineation that does not exist in the Jewish world.” Works are the clear sign of faith in God. Dr. Friedman correctly avers that “Ya’akov believed that fulfilling the instructions given in the Torah were a certain sign of one’s faith in Messiah Yeshua. The faith of this community and their ensuing fulfilling of the Torah were two parts of a whole, intrinsically connected to each other.”

This is a commentary I highly recommend. It is very readable, replete with valuable insight, and focused on drawing the reader into the text and what the text states from the perspective of what the original audience would have understood James to be relaying. For those who are unfamiliar with taking the time to engage the original languages and then understanding how properly defining terms as they are used in their context and within the greater corpus of Scripture, Dr. Friedman’s commentary will challenge you to begin making that approach a regular part of your Bible study. This is a great tool for pastors, seminary students, and all believers who wish to grasp what James was saying to that first century audience and how those truths relate to us today.

This book is available for purchase from Lederer Books by clicking here.

I received this book for free from Lederer Books via Cross Focused Reviews for this review. I was not required to write a positive review. The opinions I have expressed are my own. I am disclosing this in accordance with the Federal Trade Commission’s 16 CFR, Part 255 : “Guides Concerning the Use of Endorsements and Testimonials in Advertising.”