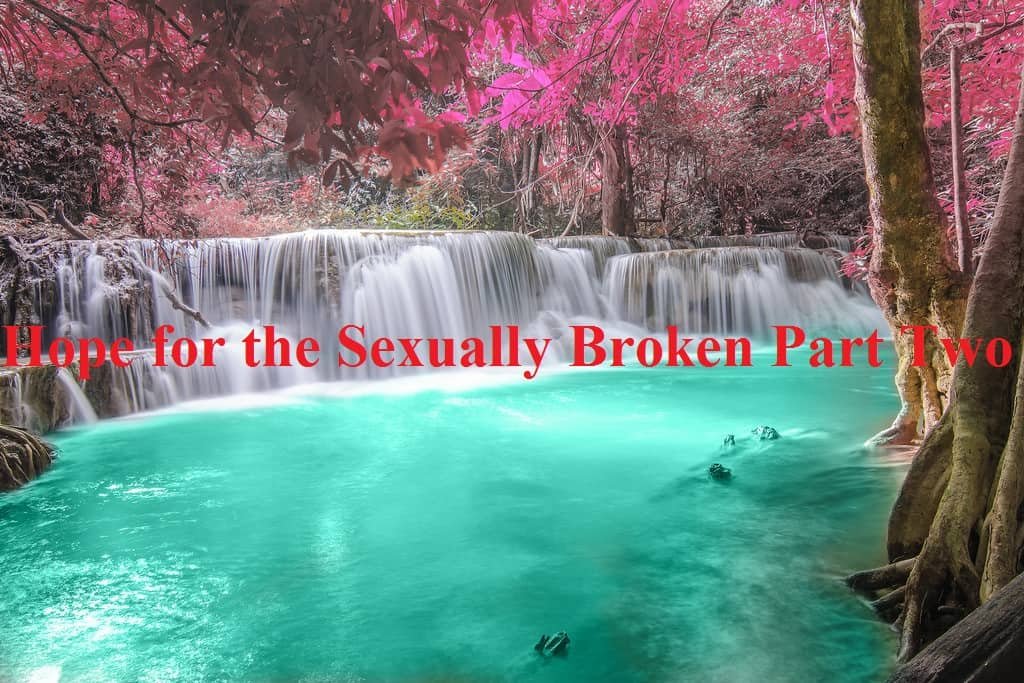 Using the Gospel to Fight Pornography

Remembering the gospel and its salvific benefits is a priority in an effort to fight sexual sin. The Gospel should also be used as the means by which to fight temptation. Walter Marshall, a nonconformist Puritan pastor from the 1600s once stated, “The Scriptures tell you two things about living a godly life: first, they tell you what God wants you to do (the law); second, they tell you how you can actually do it (the gospel).”[1] God has not only ordained the means of salvation, he has also ordained the means of sanctification. The two cannot be separated.

In salvation, God has deposited his Holy Spirit in the believer. Ephesians 1:13-14 states, “In him you also, when you heard the word of truth, the gospel of your salvation, and believed in him, were sealed with the promised Holy Spirit, who is the guarantee of our inheritance until we acquire possession of it, to the praise of his glory.”

The deposited Holy Spirit is God and his primary work includes glorifying Christ (John 15:26). The Holy Spirit does this in three ways according to Pastor James Montgomery Boice, “The Holy Spirit glorifies Jesus by teaching about him in the Scriptures (Jn. 16:12-13); drawing men and women to him in saving faith (Jn. 14:17); and by reproducing Christ’s character (Gal. 5:22-23).”[2] Let’s now explore some of the Spirit’s work in producing Christ’s character in the Christian.

Consider Paul’s words in Galatians 5:22-23: “But the fruit of the Spirit is love, joy, peace, patience, kindness, goodness, faithfulness, gentleness, self-control; against such things there is no law.” From the onset, it is important to note that the Holy Spirit produces this in every true believer. No Christian ultimately fails in producing the fruit of the Spirit.

This is another reason, to begin with, the Gospel. Much frustration has been produced when an unbeliever attempts to modify his or her behavior through 12 step programs or the like. In the end, these programs only produce counterfeit fruit and the approach is often temporal and unproductive. Even more, than that, the program is not sufficient to save the soul of the sexually immoral.

Edward Welch, professor of practical theology at Westminster Theological Seminary powerfully demonstrated this when he said, “Our liberation comes through a person, not a system of ideas and principles. “Everything we need for life and godliness” ultimately comes “through our knowledge of him [Jesus Christ]” (2 Pet. 1:3).”[3]

The Apostle Paul is careful here to communicate that it is the Holy Spirit that produces God-centered, lasting good works. The list is profitable to explore in order to define Christ-like character.

It is no coincidence that love leads this list. Elsewhere the Apostle Paul says “So now faith, hope, and love abide, these three; but the greatest of these is love.” (1 Cor. 13:13). This type of love is God-focused not self-focused. This is not a “you must learn to love yourself” type of love. Instead, this love is consumed with a passion for the glory of God. This type of love is also concerned with serving others and exalting Christ and is motivated by repentance.

The Holy Spirit produces joy in the life of a believer. A common theme with men entangled in sexual sin is depression. Sexually immoral men are very depressed individuals. Believers are often timid to use the word happiness. But this seems to be what Paul is seeking to convey.

The Greek word is chara and is related to grace. It carries this idea of thankfulness to God for being forgiven. A believer with joy understands that he is already forgiven because of Christ. 2 Corinthians 6:10 expresses this idea even better: “…as sorrowful, yet always rejoicing; as poor, yet making many rich; as having nothing, yet possessing everything.” Joy is the remedy for the depressed believer entangled by sexual sin and temptation.

Peace is another fruit of the Holy Spirit.  Boice states, “Peace is God’s gift to the human race, achieved by him at the cross of Christ.”[4] Because believers have peace with God they have the peace of God and the ability to live at peace with one another. Philippians 4:7 states, “And the peace of God, which surpasses all understanding, will guard your hearts and your minds in Christ Jesus.” God’s peace has the ability to guard both the heart and mind of the Christian struggling with pornography.

Patience is often a difficult fruit for the sexually immoral. Sexually immoral people are selfish.  Men enslaved by pornography are consumers. In other words, they are takers.

Men trapped in the world of sexual immorality want what they want and they want it now. Any delayed sense of gratitude is met with hostility. Simon Blackburn, former professor of philosophy at the University of Cambridge and research professor at the University of North Carolina at Chapel Hill once stated: “Living with lust is like living shackled to a lunatic.”[5]

Blackburn, who doesn’t indicate any religious beliefs understands the affect sexual sin has on the mind of a man. The Holy Spirit, however, has the ability and in fact, does produce patience in the life of a believer. The ultimate example of patience is God’s patience with sinners (2 Pt. 3:9).

Kindness and goodness, for the most part, can go hand in hand with one another. Both of these are also difficult for the man consumed by his unbridled lust. It is difficult to truly be kind and good to people whom are viewed as objects of fantasy. This is the by-product of being numbed and calloused by unbridled sexual sin. Albert Mohler, president of The Southern Baptist Theological Seminary in Louisville, Kentucky writes:

In contrast, God’s inexhaustible kindness towards man leads him to repentance (Rom. 2:4).  Looking to God and his kindness toward sinners should produce a desire to demonstrate kindness toward one another understanding that kindness can be used as a tool to bring about reconciliation.

Faithfulness, or the Greek word pistis, means trustworthiness or reliability. God demonstrates this faithfulness ultimately to his children. Malachi 3:6 states, “For I the LORD do not change; therefore you, O children of Jacob, are not consumed.” God’s assurance of salvation is based on his faithful character. This should produce the motivation to faithfully cherish and trust Christ and flee the sin of sexual immorality.

Gentleness is not a word used to describe the sexually immoral. Jesus says in Matthew 5:5, “Blessed are the meek, for they shall inherit the earth.” John MacArthur, pastor of Grace Community Church says this regarding this particular fruit of the Spirit:

It is a humble and gentle attitude that is patiently submissive in every offense while having no desire for revenge or retribution.  In the NT, it is used to describe 3 attitudes: submission to the will of God (Col 3:12), teachability (Jas. 1:21), and consideration for others (Eph. 4:2).[7]

A meek or gentle man is one who understands the weight of his sin, the high cost of redemption and is grateful to God for providing reconciliation. He is a peacemaker.

Dr. Robert Kellemen, Vice President and Biblical Counselor Chair at Crossroads Bible College sheds light on the fact that the perception that God is trying to limit freedom is nothing new. He states:

Satan attempts to minimize Eve’s perspective of God by claiming that God minimizes her freedom.  He poisons Eve’s view of God.  He emails a virus into her system that seduces her to see God in a punitive, rather than a protective way.  He tempts Eve to see herself as sufficient rather that trust God as her sufficient Shepherd.[8]

C.S. Lewis even understood this type of thinking by someone who is enslaved in sexual immorality.  Consider the words of the demon, Screwtape in Lewis’ work of fiction, The Screwtape Letters:

The Enemy’s [God’s] demand on humans takes the form of a dilemma; either complete abstinence or unmitigated monogamy.  Ever since our Father’s [Satan’s] first great victory, we have rendered the former very difficult to them.  The latter, for the last few centuries, we have been closing up as a way of escape.  We have done this through the poets and novelists by persuading the humans that a curious, and usually short-lived, experience which they call ‘being in love’ is the only respectable group for marriage; that marriage can, and ought to, render this excitement permanent; and that a marriage which does not do so is no longer binding.  This is our parody of an idea that came from the Enemy [God].[9]

To contrast, as a believer, the Holy Spirit produces the ability and Gospel-fueled motivation to be “strong in the Lord and in the strength of his might” (Eph. 6:10) understanding that believers can endure “all things through him who strengthens…” (Phil. 4:13). This drastically shapes the way a believer views sex and sexuality and is completely counter-cultural. Apart from God’s grace, the sexually immoral is doomed to view the gift of sex from a distorted perspective furthering deadening their ability to enjoy it to its fullest.

The fruit of the Spirit is distributed only to those who repent of sin and trust in the finished work of Christ. As believers cherish and adore Christ, their affections are stirred by the Holy Spirit and their hatred for sin is increased. This can lead to a perpetual fast from the sin of sexual immorality. My next article will discuss in further detail the doctrine of repentance.