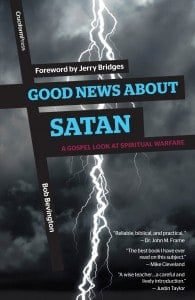 Life is a battlefield. It seems if it is not one thing it is another in our daily lives from dealing with issues at work, home, mounting bills, problems around the world, a screaming kid, or you name it. Also amongst the battles we face are those of fighting the urge to sin and break God’s commands. No matter what battle we seem to be engaged in, one important truth to remember is they are rooted in the spiritual warfare that rages each and every single day. Ben Bevington, in his excellent book Good News About Satan: A Gospel Look at Spiritual Warfare, explores what spiritual warfare is all about, how we can know the enemy and his tactics, and most importantly, the reality that we can have confidence the victory has been won.

There are many books on the market that deal with matters of spiritual warfare, some good and many not so much. Many authors forget the answers to the battle that wages against spiritual forces in heavenly places are found within the pages of Scripture. I firmly believe that focus on Scripture is where Bevington’s book shines the brightest. Now there is nothing wrong with some quotes from godly men on a particular topic. With that said, there is something refreshing about an author who writes a book with the sole source of information being the pages of God’s Word.

Bevington does an excellent job of outlining the playing field. Just as an army going into battle must understand their enemy, the ground they are fighting over, the enemy’s tactics, the enemy’s weakness, and the strengths of your own troops before going into battle, so to should the believer analyze these same issues when battling Satan. As Bevington so rightly notes, “As members of the kingdom of God, all Christians are unavoidably involved in the conflict – each one of us is commanded to engage in active resistance.” Thus, sitting on the sidelines of this war is not an option.

Also of note in this book is Bevington’s apt evaluation of the strategy of Satan. It is important to understand that not every evil thing that occurs in life is the work of a demonic force. There is an alignment of forces arrayed against humanity that all seek to trip us up. These three pernicious foes are “the word, the flesh, and the devil.” Scripture provides us with the blueprint for being able to identify which of these foes at work in a given situation. Bevington does a marvelous job of helping the reader learn how to read the battlefield and to properly identify which attack is being thrust.

There are some who seem to feel as if the battle against the enemy is a losing proposition. Everywhere we turn, it seems as if heartache, strife, and godlessness reign supreme. Bevington addresses that wrong attitude, noting the enemy has weaknesses given he is not God, and most importantly, Jesus has won the victory over the enemy on the cross. The life, death, and resurrection of Jesus took the battle to the enemy’s own camp, utterly defeating him. While in this life we will continue to endure trouble, hardship, and temptation, the believer can remain confident as they fight this spiritual battle that the victory is complete. This is a reminder we all need each and every day and Bevington saliently and gently reminds the reader of exactly Who is on our side and the reality that King Jesus has secured the battlefield.

Furthermore, Bevington discusses how the battle must be fought and what weapons we have been provided by God by which engage in this conflict of the ages. He notes we are to remember who we are in Christ. We are the children of God and God takes care of His children. Additionally, Bevington comments that when we put on the full armor of God, it must be done with a gospel-centered approach, keeping our eyes fixed on Jesus who won the victory. Moreover, Bevington reminds the reader that to resist the temptation of the enemy, we must humbly submit to God as well as confess our sin and repent of wrongdoing. These are all keys to a successful battle strategy and they are all found in our battle manual – The Word of God.

I highly recommend this book for all believers. We are all engaged in spiritual warfare whether we want to believe so or not. Bevington’s powerful book is Scripture centered, gospel-centered, and timely. Those who have been sitting on the sidelines hoping the battle will pass them by desperately need to read this book as a call to arms. Those who have been fighting the good fight for many years also need to read this book as a source of encouragement. As the title of this book so rightly notes, the good news about Satan is he is a defeated enemy and God has provided His people the tools to resist temptation and to be the warriors of the Kingdom we have been called to be.

This book is available for purchase from Cruciform Press by clicking here.

I received this book for free from Cruciform Press for this review. I was not required to write a positive review. The opinions I have expressed are my own. I am disclosing this in accordance with the Federal Trade Commission’s 16 CFR, Part 255: “Guides Concerning the Use of Endorsements and Testimonials in Advertising.”