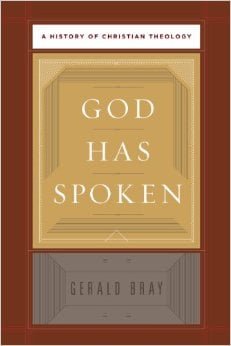 God Has Spoken: A History of Christian Theology 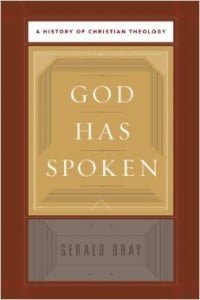 An important aspect of studying Scripture is understanding and studying the history of how Christian doctrine has been formulated over the years. Having a valuable resource available that traces that journey, noting the key points to include the why and how of why certain doctrines were held firm and others rejected, is indeed an important addition to an believer’s bookshelf. Gerald Bray’s book, God Has Spoken: A History of Christian Theology, is just that helpful compendium.

This is a massive book and rightfully so given the lengthy history of doctrine it traces within its pages. In part one, Bray begins by discussing the Jewish roots of the faith, focusing most of his time on the parting of the ways between Judaism and those who understood their Hebraic roots as pointing to Christ. The real division between the two faiths resides in what Bray notes as the reality that “Both the rabbis and Jesus believed that all authority came from God and that it was contained in the law of Moses. But Jesus taught that the written law pointed to him as its author, its content, and its fulfillment, and he claimed authority over it.”

Despite the clear differences between Judaism and Christianity, it is important to understand there is a shared inheritance. One such inheritance is that of a belief in a divine act of creation. Bray aptly notes “Belief in the divine creation of the material universe is another important legacy to the church from ancient Israel.” While other pagan civilizations believed their multiplicity of gods were involved in making all things come to be, both Judaism and Christianity affirm a supreme God as over and above everything and He alone is worthy of worship. Bray notes the importance that “Jews and Christians also believed that everything made by God was fundamentally good. The goodness of creation meant that evil could not be inherent in any part of it.” Thus, those who try and affirm death or decay prior to sin have a difficult time establishing any historicity of such a belief, either in Christianity or Judaism.

Part two is a discussion of God the Father. Bray again traces the Hebraic roots of the faith and how they connect with Christianity and where they diverged along the way. The idea of God as Father, while addressed to a minimal degree in the Old Testament, was not something that was noted on a grand scale. Thus, when Jesus referred to God as His Father, using terms of intimacy of relationship, this understandably stirred up the Jews. They made the connection that Jesus was claiming to be equal with God. This idea of fatherhood was also present in pagan cultures. Bray rightly noted the influence of Greek philosophy upon both Judaism and Christianity, in particular that of Plato. Jewish writers such as Philo were heavily influenced by Plato, although as Bray comments, Philo “always made sure that it was adjusted to the teaching of the Old Testament.” Nonetheless, some teachings of Plato found their way into Judaism and Christianity for that matter resulting in some serious problems that the early church had to address.

Another interesting discussion point Bray provides is the challenge of the Incarnation, specifically Jesus being fully God and fully man. While the theology of the Incarnation can be said to have not been as fully developed within the early church as it is today, Bray states “In the early days of the church, confessional statements about Jesus were simple and unsophisticated, but they were always there. From the very beginning, no one could join the community without professing Jesus as Lord and Savior.” Yet how Jesus could be both fully God and fully man at the same time remained a point of discussion. This resulted in a number of heresies developing within the early church such as Adoptionism and Arianism. These positions gained such popularity and were of such concern to the church that it was recognized they needed to be addressed. Bray outlines how these issues were addressed at the Council of Nicea and what took place after that Council. This was truly a formative and important time for the church and Bray does an excellent job of noting the players and the results of the many theological decisions that were made during this period. Bray provides a lot of information to dig through, but it is well worth the effort as he shares insight that I had not read prior to engaging this book, despite taking numerous church history and doctrine courses in Bible College and Seminary.

While the vast majority of this book is focused specifically on the history of doctrine, both how Christianity traces its roots from Judaism and additionally how the early church developed the doctrine we hold to today, Bray also takes the time to discuss some important issues the body of Christ is currently facing. To some degree, we are facing some of the same challenges the early church faced, namely how man understands God. The horrors of World War II resulted in some liberal theologians trying to reframe who God is and how He relates to His creation. Bray notes “they reshaped the classical picture of an impassible God.” This led to the question of whether God “feels” with Christ’s declaration on the cross of “Why have you forsaken me” being the focus of their position. Bray does an admirable job of wading through this issue of whether God has feelings in the sense we understand that concept. I appreciated his discussion on this issue and his willingness to let Scripture speak where it speaks and to admit a bit of mystery exists outside our comprehension when such a conclusion is the only one possible.

As noted by Bray at the conclusion of this excellent book, “What we can say for certain is that as long as the Christian church continues to exist there will be theological reflection, because without theology the Bible and its message cannot be preached or understood, let alone applied, as it must be if the gospel is to be securely implanted in the hearts and minds of believers.” God has indeed spoken and has spoken through His Word. Thus it is vital to take the time to look back at history to see where and how doctrine has developed so that by doing so we can stand firm on biblical truth.

I highly recommend this book, especially for pastors and Seminary students. It is full of valuable information, in many cases information I had only read in passing in other books that discuss similar or related subject matter. It is a resource I will return to many times in the future and it is well worth taking the time to read and study.

I received this book for free from Crossway Books for this review. I was not required to write a positive review. The opinions I have expressed are my own. I am disclosing this in accordance with the Federal Trade Commission’s 16 CFR, Part 255 : “Guides Concerning the Use of Endorsements and Testimonials in Advertising.”