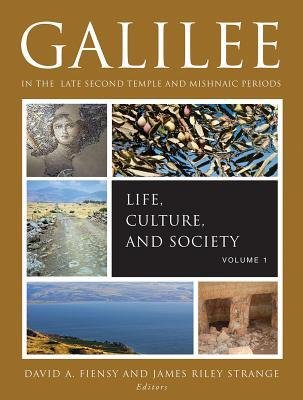 Galilee in the Late Second Temple and Mishnaic Periods

Galilee is the place where Jesus spent most of his life and ministry. Thus, having a well developed understanding of the culture, history, economics, and religious life of this part of the world during the time of Jesus is quite important when studying Scripture. Furthermore, the Second Temple and Mishnaic periods were formative times for Judaism. On the whole, digging into Galilee and its people is an important element for the believer. Galilee in the Late Second Temple and Mishnaic Periods edited by David Fiensy and James Strange, is a helpful guide to Galilean studies.

As noted in the introduction to this book, “Galilee has fascinated historians for 150 years.” In recent years, studies on Galilee have become more mature and focused, moving past the initial incorrect assumptions made by historians regarding Galilee as more information has come to light. A distinct focus on the study of Galilee as noted by Roland Deines is a result of the several rounds of historical Jesus research. The discussion by Deines on this research was truly fascinating as he traced scholars’ thoughts over the years on Jesus and his interaction with the Jews in the Galilean region. He aptly notes the study of Sean Freyne who recognized “that there was a gradual hellenization, in particular with regard to the influence of Greek language.” Even still, there was “in Galilee and its population a mostly unbroken tradition with Israelite roots.” For Freyne, this explains in part “the common culture and close links with Judea and Jerusalem.”

Another interesting and informative chapter in this book is contributed by Lee Levine and focuses on the synagogues of Galilee. Levine discusses Jesus’ activity in the synagogues in Nazareth and Capernaum as well as events surrounding the synagogue in Tiberius, and archaeological evidence related to the synagogues in Gamla (Golan), Khirbet Qana, and Migdal (Magdala). As noted by Levine, Jesus appearance and actions at the synagogue in Nazareth as noted in the gospel accounts resulted in those in attendance being “highly offended by his words, although the reason for this is not made clear.” The gospel accounts provide some insight into the components of the synagogue liturgy, specifically the reading of the Torah portion. Of note concerning Jesus’ interaction with the synagogue in Capernaum is his healing on the Sabbath and the reaction that engendered both by those in the congregation and more importantly, by the Pharisees. These events as noted in the gospels provide some interesting insight into the actions of Jesus, the synagogue service, and the beliefs of the religious leaders to include the influence of those beliefs on the local populace.

One final aspect of this helpful study on Galilee that I found interesting was that of the education and literacy in Jewish Galilee, a chapter contributed by John Poirier. There is some disagreement among scholars based on seemingly conflicting historical information as to the extent of literacy in Jewish Galilee during this period. Historians such as Josephus claimed “all the Jews of his day knew the law.” Poirier notes “The Talmuds claimed that a system of primary schools was established in the first century BCE” which one can assume would have resulted in a high literacy rate. Of additional interest is that “When education was pursued, it was basically for Hebrew literacy – for the sake of reading Scripture. Only occasionally was grapho-literacy the goal.” Poirier also comments that “Even fewer Jewish students were afforded the opportunity to learn traditional “Greek” subjects, such as Homer, philosophy, and rhetoric. Indeed, there was even some opposition to the very idea of providing a “Greek” education for Jewish boys.” It would have been interesting for Poirier to comment on the potential for such a focus on education being Torah related rather than obtaining a Greek education as a means for the tide of hellenization to be stemmed, but that issue unfortunately was not discussed in this chapter.

There is a ton of valuable and quite interesting information packed into this book. Furthermore, the copious footnotes provided by the various contributors will assuredly result in even further study on the subject of Galilee for those who take the time to work through this excellent book. I found this effort to be scholarly yet highly accessible and a resource that I will return to in the future should issues related to the study and understanding of Galilee during the Second Temple and Mishnaic Periods come to light. I highly recommend this book for anyone interested in Galilee during this period of history.