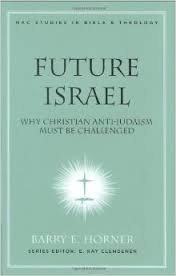 Future Israel: Why Christian Anti-Judaism Must be Challenged

There are some segments of Christianity that espouse the belief that God is done with the Jewish people. This idea is rooted in Replacement Theology, namely the affirmation that the Church has completely replaced Israel in salvation history and therefore God no longer has any plans or use for the people of Israel. Essentially, this system promotes that Israel has been set aside, no longer to be of any consequence. Such a notion is biblically unfounded. Barry Horner, in his book Future Israel: Why Christian Anti-Judaism Must be Challenged presents a biblically sound approach to the reality that God is not done with His people and why such an idea must be rooted out from within the body of Christ.

Horner begins by looking at a variety of theological thought on this topic to include the writings of Augustine, John Calvin, Horatius Bonar, and C. H. Spurgeon, noting the attitudes taken by these prominent theologians towards the Jewish people and their understanding of whether or not God still has a plan for His people. Horner also explores the rather unsavory history of anti-Judaism and supercessationism by many throughout church history. He rightly notes “An astonishing ignorance abides today concerning the legacy of Christian anti-Judaism, and works of church history frequently fail to discuss it.” Thankfully, Horner exposes this ugly side of things and rightly so, providing the reader with valuable insight into how anti-Judaism fervor reared its ugly head far too often.

Such fervor continues even today in various forms. Horner not only explores past anti-Judaism but he also demonstrates how this attitude has shaped the theology of many current and noted authors and theologians in the United States and throughout the world. I will be honest in saying some of the names he mentioned were quite surprising. Mentioning these individuals whether past or present is not intended as a personal attack. Conversely, Horner is merely trying to point out that anti-Judaism is a pernicious and often sneaky wrong doctrine that can present itself in the writings of even the most astute theologian. Thus, it must be guarded against.

I found Horner’s discussion of the alignment of certain authors and theologians with anti-Israelite camps to be both interesting and frightening. Love for their land has been at the core of the Jewish people’s very being and Horner traces different points in history when the Jewish people have been scattered from their homeland and when they have returned. Some within the Church reject Zionism while others are, as noted by Horner, “torn in two directions, even as did Paul when he described the unbelieving nation of Israel in his day as God’s beloved enemy.” While many Jewish people continue to reject Jesus as the promised Messiah, , Horner rightly comments, “God retains a deep covenantal interest in His people of the flesh in the same manner that he indicated this loyal love toward Israel as an adulterous people by means of the prophet Hosea.”

Of course, the fight over the land of Israel continues to be front and center. While it is quite clear that the Palestinians and the Arab countries surrounding Israel have no love for her as a nation, it is quite shocking to see the number of well-respected Christian theologians who reject the very idea that the people of Israel returning to the land as promised by God long ago. One will be surprised to see the well-known theologians who affirm such an idea. Horner does a great job of explaining this promise of the land found in both the Old and New Testaments. He suggests this future reality will be a “future, holy, consummate messianic kingdom subsequent to the return of the Lord Jesus Christ and whose nature may be designate as spiritual materiality.” Furthermore, “In this setting of heaven come to earth, Israel and the Jewish people will be fulfilled, not superseded, and the Gentile nations will happily submit to this divine order as engrafted wild olive branches.” While such an approach is certainly opposed to the popular Dispensationalism theory promoted by many today, Horner’s statement is more in line with biblical truth and a more cogent approach to matters of eschatology.

Romans 11 is an often wildly debated chapter with many using it as a springboard by which to either affirm the Church replacing Israel or the opposite approach, namely the reality that Gentiles are grafted into the olive branch. As such, Horner’s chapter that addresses this often thorny issue is in my opinion the best aspect of this book. He begins his examination of Romans 11 by noting “a correct interpretation of the new covenant passages requires a hermeneutic that gives serious consideration to the Jewish presuppositions that are inherent in them.” To do otherwise involves the aberrant theories of replacement, supercessionist, or fulfillment theologies. The exegesis conducted by Horner is quite excellent and very in-depth.

I highly recommend this book for all believers. The subject matter is extremely important and Horner does a marvelous job of digging into past and present thought and how it aligns with Scripture. While this book will likely not resolve all of the raging debate within Christianity and theological thought, the reader will certainly have a much better understanding of the fact that God still has a plan for the Jewish people. While many of them continue to reject Jesus and are in need of the saving message of the Gospel, this does not mean the Church has superseded them nor does it mean God has washed His hands of the people He made a covenant with. Horner’s work has certainly brought many issues to light for me and I will definitely return to it in the future for further study on this topic as it is chock full of valuable information.

This book are available for purchase from B&H Academic by clicking here.