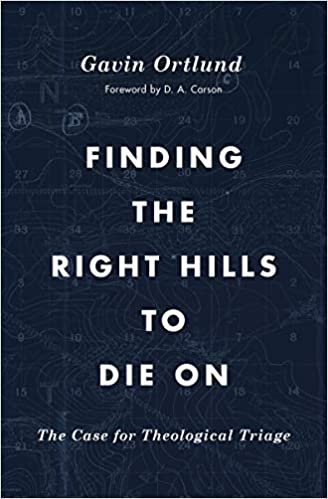 In recent years, in evangelical circles, much talk has centered around the idea of “theological triage.” The term has been credited to Dr. Albert Mohler, though the concept has been around for a long time. In a divided age, unfortunately, even many Christians fall into a dispute over a difference of opinion, which is often made worse by social media, where people can argue fiercely without having to be face to face. Christians are called to unity, even amidst theological differences. How should believers navigate the difficult theological waters and find ways to work together where possible? Finding the Right Hills to Die On: The Case for Theological Triage (Crossway, 2020) by Gavin Ortlund discusses these matters and more in his most recent book.

The term “theological triage” is an excellent word because it helps us understand the art of determining what is most important when it comes to theological issues. Triage is a term used primarily in the medical field to determine which patients to help first. In an emergency room setting, the medical staff is going to tend to a patient in critical condition after an accident before they tend to a patient with a broken arm. In his book, Ortlund walks through four levels of triage, which prove helpful when deciding how to engage the world with the gospel. It is especially important in Western culture, which has seen a decline in religious attendance over the past several years, for Christians to work with one another to make disciples. Theological triage allows believers to know how to relate to one another amid theological differences.

The second level of theological triage is determining what second rank doctrines are. These doctrines are considered urgent matters but are not essential to the gospel. Christians can and do often disagree on second ranks doctrines, but by doing so, they have not compromised the gospel. This is the point in which many Christians decide to part ways, especially on the local church level.

Christians who disagree on second rank doctrines may decide not to fellowship together in the local church, but can and should work together to make disciples. In the book, Ortlund uses doctrines such as baptism, gifts of the Spirit, and the role of women in ministry to highlight the differences many Christians have on second rank issues. We see throughout the Western Church, how these doctrines have caused denominational splits, and disfellowship among believers. This level of theological triage shows uniformity is not the same as unity. Believers can stand in unity on first rank doctrines while having sharp disagreements on second ranks doctrines.

The third level of theological triage is determining what third rank doctrines are. These doctrines are considered important to Christian belief, but should not warrant division among believers. Christians can differ, even sharply, over third rank doctrines but still fellowship together in the same local church. In the book, Ortlund uses the doctrines of eschatology and the days of creation to highlight differences of opinion among believers. While these doctrines are important to many Christians around the world, they are not essential to the gospel. Unfortunately, many believers try to divide over third rank issues, all too often by making them first rank doctrines, which should never be the case, and Ortlund does an excellent job of explaining why this ought not to be.

The last level of theological triage is determining what fourth rank doctrines are. These are doctrines that are unimportant to the gospel and mission of the church. Ortlund does not dedicate a chapter in the book to this level of triage because they are not essential or important to the gospel. These doctrines include many political opinions, the style of music in worship, the number of angels in heaven, etc. These doctrines can be used in a healthy debate among believers, but should never be the source for division in the local church, although some churches have split, sadly because of music style and the color of the carpet.

Ortlund does an excellent job of getting his points across, and the book is well laid out. He takes the first part of the book to lay out the importance of theological triage as well as share his personal experience as he has grown in the area of theological triage. He writes from a pastoral point of view, which allows the reader to see the care with which these doctrines must be taken. The book is not an exhaustive look at theological triage, but it is an extremely helpful guide to navigating theological issues from a pastoral perspective. I would highly recommend this resource to all pastors and church leaders. These issues will come up in the local church, and this resource will be a helpful guide in shepherding a local congregation through tough questions.