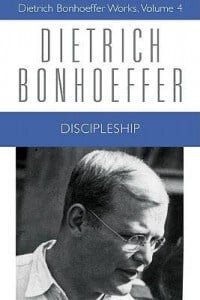 The theme of easy grace at times seems to permeate the pulpit and Christian books in recent memory with calls for a life of ease residing at the fingertips of those who can garner enough gumption and belief to obtain it. But is this approach of a life of ease with no hint or mention of what biblical discipleship and following Christ really speaking truth to this issue? Are we actually expected as believers to respond to Christ’s call with something more than a walk down the aisle and a prayer? In his classic treatise on the issue of the nature of discipleship, Dietrich Bonhoeffer digs deep into what God says about this issue.

This is the fourth volume in the Fortress Press Dietrich Bonhoeffer Works series and I have to submit it is my favorite volume thus far. Discipleship is hard-hitting book, honest in its treatment of discipleship, and foremost, the approach taken by Bonhoeffer is wonderfully biblical. He makes no secret of his disdain for what he labels as cheap grace or the belief in the “justification of sin but not of the sinner”. In fact, Bonhoeffer calls cheap grace “the moral enemy of the church in the very first sentence of this book and rightly so.

With that said, this is also not a book that is merely a tirade against cheap grace with no definition provided of what biblical grace and the believer’s response to such an unmerited gift looks like in practice. Bonhoeffer was a man who intimately knew what it meant to live a life of devotion to God in the face of tyranny and persecution. He knew what it meant to stand up for truth, knowing that death might ensue. He understood Christ’s words that persecution would come to those who followed Christ.

I appreciated Bonhoeffer’s elaboration on what the call to discipleship means in practice, in particular what the proper response is to Christ’s call to follow Him. Bonhoeffer aptly notes, “Because Jesus is the Christ, he has authority to call and to demand obedience to his word. Jesus calls to discipleship, not as a teacher and a role model, but as the Christ, the Son of God.” Furthermore, this call to discipleship is one of grace, a costly grace on behalf of the one who calls and the one who follows. Bonhoeffer describes this call as “a gracious call, a gracious commandment. It is beyond enmity between law and gospel. Christ calls; the disciple follows. That is grace and commandment in one.” Jesus calls, we obey by following that command and being obedient to Scripture in our walk with him.

Of further note is Bonhoeffer’s discussion on the set-apart nature of those follow Christ. This is an important discussion given the people of God are the ecclesia, or those called out of those around them to be a people holy and set apart for God. This calling out of has a defined meaning and application in Scripture and Bonhoeffer does an excellent job of walking the reader through the Sermon on the Mount. Of great import is the following outstanding statement by Bonhoeffer:

“Jesus does not permit his listeners to simply walk away, making whatever they like of his discourse, extracting what seems to them to be useful in their lives, testing how this teaching compares to “reality”…Jesus knows only one possibility: simply go and obey. Do not interpret or apply, but do it and obey. That is the only way Jesus’ word is really heard.”

Thus the command to follow Jesus comes as part of the package the command to hear and obey. To be called out of as a disciple of Jesus requires that costly grace of hearing the word and obeying it.

Finally, it must be noted that Bonhoeffer also drives home the importance of being the ecclesia and the aspect of that reality as it is reflected in being holy as God is holy through the process of being sanctified through the work of the Holy Spirit. Thus, grace is not cheap because it demands a change of heart and mind. It is costly because this requires a bit of work. Bonhoeffer skillfully relays the balance that exists between law and obedience to God’s law and the work of grace found in the cross. He saliently notes, “Our goal is to do the good work which God demands. God’s law remains in effect and must be fulfilled. However, there is but one work which deserves that designation, namely, God’s work in Christ Jesus. We have been saved through God’s own work in Christ, rather than through our own works. Thus we never derive any glory from our own works, for we ourselves are God’s work. But this is why we have become a new creation in Christ: to attain good works in him” and I will add to the glory of God.

I cannot recommend this book enough. In a day and age when cheap grace has become so popular, the call to a life of discipleship and obedience is sorely needed. Dietrich Bonhoeffer, in this excellent book, calls the believer back to a life of surrender to the cross and a life lived in devotion to God’s commands to the glory of God.