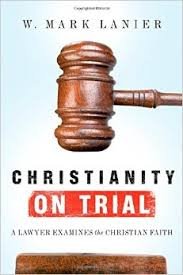 Christianity On Trial: A Lawyer Examines the Christian Faith

We live in a world where every day biblical Christianity is challenged on a variety of fronts. On one front Christianity is attacked by the idea that it is intolerant. On the other we’re told what we believe is outdated. Even from within our own ranks we’re told that orthodox Christians have gotten key doctrines wrong. How should Christians respond to these claims? One author, Mark Lanier, one of America’s top trial lawyers brings a legal eye to examine the evidence for the Christian faith. Through explaining the rules that courts follow, he probes key issues and interrogates witnesses from throughout history to explore whether it makes sense to accept the Christian worldview. This and more he explores in his new book, Christianity On Trial A Lawyer Examines the Christian Faith.

The book opens by setting the stage for what follows. Here the author shares some of his personal story and the reason for why he wrote this book. The author then moves in the first five chapters to look at the doctrine of God. Chapter six explores the God who communicates through His Word. Chapter seven examines the nature of truth and the God of Truth. Chapter eight looks at right, wrong, and the moral law of God. Chapter nine considers free will, moral responsibility, and the justice of God. Chapter ten looks at the truth of the resurrection, and chapter eleven explores death and eternity. The book concludes with a look at the truth of Christianity.

Christianity on Trial has many strengths. First, the author’s understanding of the legal court room helps the reader come to understand that the Christian faith can hold up under the most intense scrutiny and demonstrate not only its truthfulness, but it’s reasonableness as the author calls it. Second, popular culture loves to paint Christians in a negative light. Often we’re portrayed as if we aren’t intelligent at all. This book shows that one can use their vocation (a lawyer exploring the evidence for the Christian faith) in credible ways established by the legal system to prove the validity of the Christian faith. If anything this is an important point. As the author shows throughout his book through non-Christians in his own profession being attracted to the evidence for Christ and allowing him the opportunity to share that evidence with them. Finally this is an easy to understand book. While the material may be heavy for some, I thoroughly enjoyed the author’s writing throughout his book.

Whether you’re on the fence about Christianity or you’re seeking to know more about the Christian faith, Christianity On Trial has something for you. It will help you to understand that there are answers to objections from our popular culture and that Christian isn’t anti-intellectual, but has a long and rich heritage of intellectual rigor and scholarship. I think this book would be a good resource for Christians looking to know what they believe about the Christian faith and for the skeptic to learn about how the Christian faith is reasonable. Whether this book is used in this way or in another one, I believe readers of Christianity on Trial will find it a helpful and edifying book to digest and work through.

Title: Christianity On Trial A Lawyer Examines the Christian Faith

I received this book for free from Christian Focus for this review. I was not required to write a positive review. The opinions I have expressed are my own. I am disclosing this in accordance with the Federal Trade Commission’s 16 CFR, Part 255 : “Guides Concerning the Use of Endorsements and Testimonials in Advertising.”