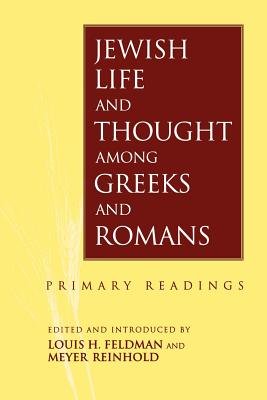 Jewish Life and Thought Among Greeks and Romans

When we read Scripture, an important element of engaging the Word of God includes the historical context of the events recorded in its pages. This includes matters of history, geography, culture, political structures, religious beliefs, and philosophical constructs. This involves a bit more than referring to the maps in the back of your Bible. While useful for identifying locations of cities mentioned for instance in the Book of Acts, there is the added necessity to dig deeper in order to understand for instance why Paul chose to go to the Areopagus in Athens or how the influence of Greek thought on the known world called Hellenization had an impact even on Jewish perceptions of the day. Louis Feldman and Meyer Reinhold have provided a collection of primary readings in this book Jewish Life and Thought Among Greeks and Romans that will assist the diligent student of Scripture.

As noted in the preface, the authors endeavor to “present representative selections from Greek and Latin literature, the Apocrypha, the New Testament, Dead Sea Scrolls, Graeco-Jewish writers (notably Philo and Josephus), Roman imperial legislation, the rabbinic corpus, inscriptions, papyri, and coins.” Furthermore, their effort at providing such a compendium of works is to “illustrate the political (with special attention to the revolts against Rome), religious (with special attention given to the various movements within Judaism and the degree of Hellenization), economic, social, and cultural life of the Jews in both Palestine and the various countries of the Diaspora for the period of approximately a thousand years from the time of Alexander the Great in the fourth century BCE to the sixth century BCE.” The greatest focus of this collection of readings is on how the Jewish people during this period related on all of the aforementioned areas with the Greeks and Romans that so greatly shaped the world at that time.

Being able to access and assess primary source readings for instance on who the “God-Fearers” were helps the reader understand who these individuals were and why individuals such as Cornelius practiced certain Jewish oriented religious observances. Feldman and Reinhold share a notation from Josephus about the “God-Fearers” that mentions “The masses have long since shown a keen desire to adopt out religious observances; and there is not one city, Greek or barbarian, nor a single nation, to which our custom of abstaining from work on the seventh day has not spread, and where the fasts and the lighting of lamps and many of our prohibitions in the matter of food are not observed.” This reveals that while the Jews were being influenced by the Greeks and Romans, the customs and religious practices of the Jews were also a source of influence to those same nations. Thus, having an understanding from a primary source perspective helps to better understand the “God-fearers” and why God chose to send Peter to Cornelius. Furthermore, these multifarious primary source readings and inscriptions from this period serve to affirm the biblical record and its historical veracity.

Also of interest is the section that discusses the life and times of Herod, a truly influential figure during the time of Jesus. The historical accounts provided by Feldman and Reinhold shine an interesting light into who Herod was, the influence he had on certain segments of Jewish society and why he had such influence, his relationship with the Romans, and his seeming obsession with rooting out plots against his life and authority. Interestingly, as noted by Josephus in Jewish Antiquities 16.60-1 and shared by Feldman and Reinhold, “Herod’s close connections with influential circles in Rome (notably Antony, Augustus, and the general Agrippa) were highly useful to the Jews of the Diaspora. Indeed, he turned out to be a champion of those Jews, as we see in the case of the Jews of Asia Minor, who had been prevented by the non-Jewish inhabitants from observing their ancestral customs.” So while Herod was certainly a rather vile character, he was nevertheless mindful of taking care of some segments of the Jewish population, even though his reasons were likely to continue his base of power.

One final aspect of this book that is of note is the discussion of the Messianic expectation that is found not only in the biblical corpus, but also in numerous other writings of this period. It was long anticipated that an anointed one (a Messiah) would come who as prophesied long ago, would come from the house of David to assume King David’s throne. In the Pseudepigraphal writing known as Psalms of Solomon, it was noted this Messiah would come to defeat the enemies of the Jews, restoring Jerusalem in the process. This concept is also found in other writings such as 1 Enoch and the Manual of Discipline which was an important set of writings for the Essene community. Thus, being able to dissect the writings of the time period, one is better able to more fully grasp the messianic fervor that was building prior to and during the time of Christ, a fervor that expected something different to take place than what Christ had actually come to earth to accomplish.

Jewish Life and Thought Among Greeks and Romans is a truly valuable compendium of primary source readings that will greatly assist the reader in having a more developed and holistic understanding of the period. It is a highly scholarly work that is nonetheless very accessible to all believers who desire to better understand the influence of the Greek and Romans and for that matter, the influence of the Jews on the same. I will certainly refer to this volume for many years to come in my personal studies of history and Scripture, and I highly recommend this as a resource tool.