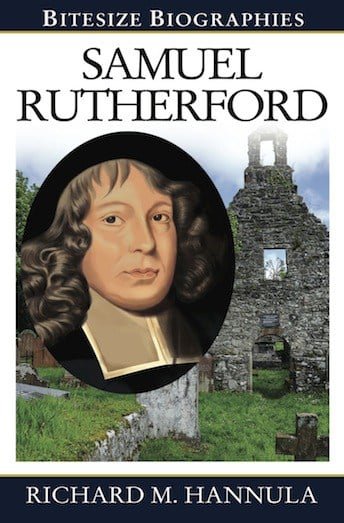 I would venture to say that most believers today have little to no idea who Samuel Rutherford is or his importance, especially within the Scottish Church in the 1600s. Part of the issue with that unfortunate lack of knowledge is the lack of focus on matters of church history within the body of Christ. Many great men and women of God from days past are relative unknowns to most believers and I find that very unfortunate. Richard Hannula, in his contribution to the excellent Bitesize Biographies series, explores the life and influence of Samuel Rutherford.

Those who are turned off by lengthy and drawn out biographies will find this particular work to be a welcome sight. While Hannula certainly covers all of the relevant issues concerning Samuel Rutherford, this book never becomes bogged down with over specific data that is so often part and parcel for longer biographical tomes. Hannula instead focuses on the impact of Rutherford and why this man of God had such a great influence in Scotland to include what that influence means for us some 400 years later.

Rutherford lived during a time when the church/state conflict raged quite fiercely. Thus, he spent a great deal of his life engaged in that conflict. With that said, I was first highly impressed with Rutherford’s devotion to prayer and the study of the Word of God. Hannula notes that Rutherford “rose at three o’clock every morning to spend several hours in prayer, meditation, Bible study and sermon preparation. As part of his daily routine, he walked the dirt trail between the manse and the church to pray under a thick canopy of branches. His parishioners often say him deep in prayer, treading the footpath with his eyes toward heaven.” Such devotion should be something we take notice of, especially those charged with teaching future pastors as well as pastors.

I was also struck by the fact that “Of particular interest to Rutherford was the spiritual welfare of children.” This passion resulted in a constant appeal by him to parents in his church to “lead their children to the Savior.” Such a passion for the future generations is something often missing in the Church today as such devotion on the parts of parents, a command of God by the way, has often been replaced with an entertainment minded mentality. Rutherford’s approach is a sober reminder of what parents and the Church needs to return to when it comes to instructing children in the things of God.

Of additional interest throughout this excellent biography is the consistency by which Rutherford stood up for biblical truth, even in the face of mounting pressure to acquiesce to the wishes of the government and those within the church. Rutherford cared nothing for giving in to such pressure and resisted with every fiber of his being. This stance led to his exile to Aberdeen. Even in this exile, Rutherford remained resolute to teach and instruct all who would hear on the truth of God’s word.

When he assumed the post at St. Andrew’s, Rutherford immediately went to work reforming an institution that sorely needed it. In fact, he declared it was his desire that “Christ may dwell in this society and that the youth may be fed with sound knowledge.” Hannula again captures the dedication of Rutherford to instructing these seminary students in the things of God, clearly honing in on the vast importance of such institutions in the training of those who will in turn be charged with teaching flocks the truth of Scripture.

Samuel Rutherford is a fascinating man who was on a mission to never waver from his call to preach the gospel and to train young minds to understand Scripture. Men of God such as Rutherford provide a wonderful example for us today of what it means to remain steadfast on the rock that is God’s Word. While many may not know about Samuel Rutherford, those who read Richard Hannula’s excellent treatment of his life, ministry, and influence, will gain a much greater appreciation for this great man of God. I know I will begin investigating his writings.

This book is available for purchase from EP Books by clicking here.

I received this book for free from EP Books via Cross Focused Reviews for this review. I was not required to write a positive review. The opinions I have expressed are my own. I am disclosing this in accordance with the Federal Trade Commission’s 16 CFR, Part 255 : “Guides Concerning the Use of Endorsements and Testimonials in Advertising.”