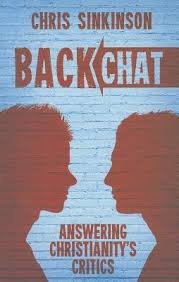 To say that Christianity and by extension the Word of God is under assault in our world today is arguably the biggest understatement of the century. Seemingly everywhere one looks, biblical truth is viewed as antiquated, intolerant, and subject to the shifting sands of the daily opinion polls of society. In the midst of this furor, believers are called by God to stand firm on the foundation of biblical truth and to be ever ready to give a defense for what we believe. Chris Sinkinson, in his helpful book Backchat: Answering Christianity’s Critics, outlines a number of ways in which believers can provide an apologetic to issues in society, matters of history, the big overarching questions of life, the church, and daily news events.

Sinkinson rightly notes in the introduction to this timely book, “Rather than being meekly apologetic, the Christian is to be confident in putting forward their case and dealing with objections.” Our comportment in doing so is often just as important as the information we provide in our apologetic. After all, we are exhorted in Scripture to provide our apologetic with “gentleness and respect” (1 Peter 3:15). It is quite tempting to lash out with ridicule those who themselves ridicule the truth of Scripture. Such an approach should not be a hallmark of the believer’s apologetics toolkit and I appreciated Sinkinson driving home that important point right at the outset.

For those desiring a deep dive into various matters of apologetics whether that is apologetics methodology, in-depth responses to critics of any number of theological matters, or an elaboration of how to respond to the problem of evil, be advised that is not the focus of Sinkinson throughout this book. While he does indeed address a number of important issues, his purpose is not to provide a lengthy thesis on matters of apologetics. Conversely, this book is intended to help the reader understand what some of the current issues facing believers are and how best to formulate a response to such issues.

For example, many willingly or unwittingly jump on certain bandwagons such as the seemingly continual declaration that some archaeologist or hiker has stumbled across Noah’s Ark. While such a discovery would certainly be very interesting if it were true, promulgating unsubstantiated claims of what continues to be in reality nothing more than an internet hoax or a story depleted of actual fact does not serve the apologetical mission of the believer well at all. Sinkinson advises the reader, if they indeed desire to utilize matters of history to defend the faith to focus on actual verifiable historical evidence even if that evidence does not carry the spectacular appeal of discovering Noah’s Ark or the long lost Ark of the Covenant. Such things are the stuff of Hollywood. Sinkinson aptly notes that in response to historians who try to minimalize biblical history such as in the case of King David, the Christian apologist can utilize archaeological finds such as the excavations at Dan and the inscriptions found at that site that reference the “House of David” and “King of Israel.” These are finds that shout from the archaeological rooftops that “King David and his royal dynasty could not be dismissed to the shadows of mythology.”

While Backchat is not as noted earlier a compendium of apologetical facts and methodology, it is a helpful introduction for the new apologist and a helpful reminder to even the most seasoned apologist of remaining focused on the true task at hand. For those who desire to engage in more depth the various issues Sinkinson presents, he does provide an excellent bibliography divided into the various sections he covers in his book. These resources will provide the reader with excellent material as they further develop and hone their apologetical arguments.

I highly recommend Backchat for those new to the effort of apologetics as well as those who have been engaged in the battle for some time. Sinkinson does an excellent job of giving the reader much food for thought on a number of important issues of our day while ensuring that in the middle of the back and forth battles with those who decry the truth of Scripture, we remain vigilant as well as responding with the utmost grace to those who so desperately need to hear God’s message of truth found in His word.

This book is available for purchase from Christian Focus Publications by clicking here.

I received this book for free from Christian Focus Publications for this review. I was not required to write a positive review. The opinions I have expressed are my own. I am disclosing this in accordance with the Federal Trade Commission’s 16 CFR, Part 255 : “Guides Concerning the Use of Endorsements and Testimonials in Advertising.”