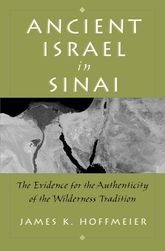 Ancient Israel in Sinai: The Evidence for the Authenticity of the Wilderness Tradition 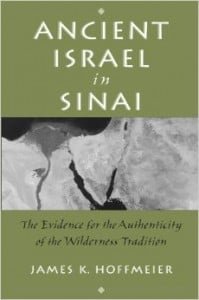 There are many who look for any way possible to denigrate the authenticity of Scripture, in particular matters related to history. One such element of Scripture that has been viewed with skepticism or at least has generated a bit of discussion as to the exact location of what transpired is Israel’s wilderness wanderings from the time they were delivered by God from bondage in Egypt to the time when they entered the Promised Land. Noted Egyptologist and Near Eastern scholar James Hoffmeier in his excellent book Ancient Israel in Sinai, provides the reader with valuable information that validates the historicity of the biblical account.

Hoffmeier draws upon his vast experience in the field of archaeology to outline his belief in a wilderness wanderings taking place in the Sinai Peninsula rather than northern Arabia as some have averred. There are some who will likely ask what difference is it as to where the people of Israel wandered around for 40 years. Is it not enough to simply believe they wandered around in the desert, regardless of its precise location so the unbelieving generation would die off thus allowing a new generation of people to enter the land of promise? Ultimately, what Hoffmeier’s research and book notes is the Bible can be trusted as being historically accurate. Despite the constant protestations to the contrary by some liberal scholars, the events noted in Scripture and the locations identified throughout can be asserted as actually taking place.

One particular aspect of Hoffmeier’s book I found rather enlightening was the connection he made between the documentary hypothesis and evolutionary dogma. While I am quite familiar with the tenets of the proposal presented by some scholars of multiple authors of the Torah vice a singular author of Moses, I had not made the important connection that such a theory can be construed as being rooted in an evolutionary approach to religion. Hoffmeier aptly comments “If humans evolved from simple life forms to complex ones, it was reasoned that human culture and institutions, social and religious, must also have evolved from simple to complex forms.” Thus, those who affirm the documentary hypothesis base their reasoning that the variety of names used for God as well as the complex religious thought identified in the Torah could only have been the product of later time period. Taking this approach in turn moves some to reject or at least question the historicity of the wilderness narrative. Hoffmeier correctly rejects the documentary hypothesis and its evolutionary based approach instead affirm the biblical narrative as historically accurate and the product of a Mosaic pen rather than the product of multiple authors centuries after the actual occurrence of the events noted.

Of additional interest is the array of historical, geographical, and archaeological facts Hoffmeier interacts with throughout this book, along the way continually demonstrating not only his expertise in these fields, but also the reality that the biblical account is completely accurate. He does a marvelous job of rejecting the mythological or symbolic approach taken by some liberal scholars to the wilderness account, using the historical, geographical, and archaeological realities to outline the fact that the information recorded for example in Exodus and Numbers reflects a “real geographic picture.” Instead of a picture of conflicting traditions written at a much later period of history, the wilderness narratives in Scripture actually reflect the forty year journey through the wilderness from Egypt to the Promised Land. Hoffmeier interacts with a number of key passages in Scripture that serve as geographical place markers, noting how Scripture reflects actual places that can be identified on a map using sound geographical and archaeological evidence.

This is truly a fascinating book replete with scholarly study that I firmly believe should be something all believers take the time to engage. Hoffmeier does an excellent job of sharing what admittedly is very scholarly information in a manner that even those not familiar with the particular geographical specifics of this part of the world can understand. Furthermore, the plethora of information provided by Hoffmeier serves to reveal Scripture can be trusted and that the wilderness wandering took place exactly as identified by Moses. Hoffmeier’s book will make a welcome addition to any Christian apologist’s collection. I know I will refer to it often in the future as a valuable reference tool. I highly recommend this book.

Buy this book from Ancient Israel in Sinai: The Evidence for the Authenticity of the Wilderness Tradition

, or from Oxford University Press by clicking here.

I received this book for free from Oxford University Press for this review. I was not required to write a positive review. The opinions I have expressed are my own. I am disclosing this in accordance with the Federal Trade Commission’s 16 CFR, Part 255 : “Guides Concerning the Use of Endorsements and Testimonials in Advertising.”