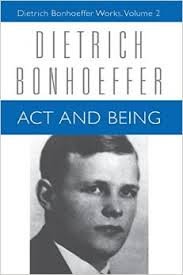 Act and Being: Transcendental Philosophy and Ontology in Systematic Theology

Dietrich Bonhoeffer was an important figure within the Confessing Church in Germany during the time of the Nazi regime of the 1930s. His better known works include titles such as The Cost of Discipleship and Ethics. Fortress Press has released a collection of the works of Dietrich Bonhoeffer to include Act and Being: Transcendental Philosophy and Ontology in Systematic Theology.

In this helpful book, Bonhoeffer tackles the issue of how to best understand the reality that “The dialectic of act and being is understood theologically as the dialectic of faith and the congregation of Christ. Neither is to be thought without the other; each is taken up or suspended in the other.” First one must address the issue of epistemology or what it means to know. In the process of coming to grips with what can be known, especially in the realm of philosophy, Bonhoeffer aptly comments “the great temptation for all genuine philosophy is for thinking to raise itself to the position of lord over what is nonobjective by taking the process of attainment, the I, into itself in the act of thinking.” This quite often leads some to the belief that self if God, something Bonhoeffer rejects as a possibility. He correctly states the a priori assumption of the Christian faith is rooted in the fact that “revelation and faith are bound to the concrete, preached word, and the word is the mediator of the contact between God and human beings, allowing no other immediateness.”

Furthermore, Bonhoeffer also declares that “only those who have been placed into the truth can understand themselves in truth. Having been placed into the truth, they may now come to understand themselves in that fashion – precisely as a foreshadowing of their re-creation, of their being known by God.” This re-creation is the movement from darkness to light, the rebirth that takes place through faith in the work of Christ on the cross. Outside that framework, truth cannot be known to the individual given that revelation and understanding exist in a place of spiritual darkness where the self is supreme. The movement from a place of darkness to a place where the untrue system is shattered happens according to Bonhoeffer “in faith through preaching.” Bonhoeffer also aptly declares “Faith is never directed towards itself but always towards Christ, toward that which comes from outside.” The self cannot by itself come to grips with truth. It takes an act of God that impacts the state of being to move the individual from the place of untruth/darkness to a place of truth/light.

The final issue Bonhoeffer tackles is the state of being “in Adam” and “in Christ.” To be in Adam is “to be in untruth, in culpable perversion of the will, that is, of human essence. It means to be turned inward into one’s self, cor curvum in se.” Those who remain in that state of untruth desire to find truth within themselves thus resulting in the inward focus noted by Bonhoeffer. The only solution to this crisis is found “when Christ has broken through the solitude of human beings.” As noted by Bonhoeffer so brilliantly, sin is an act against God and there is no way out of that bondage apart from Christ. Thus, to be “in Christ” is to be “turned outwards toward Christ.” When Christ breaks through, Bonhoeffer correctly declares “The person now lives in the contemplation of Christ. This is the gift of faith, that one no longer looks upon oneself, but solely upon the salvation that has come to one from without.” The act of sin is replaced by the act of looking to Christ thus impacting one’s state of being moving them from being “in Adam” to being “in Christ.” Once this transformation takes place, Bonhoeffer avers “The echoless cries from solitude of self, the protest against violation of any sort, have unexpectedly received a reply and gradually melt into the quiet, prayerful conversation of the child with the father into the Word of Jesus Christ.” The “I” of selfish gain is replaced with the focus on God. The act and being of life become focused on the truth found in God’s word and a life lived in obedience to God and denial of the self.

I highly recommend this book for all believers. While the concepts and terms presented by Bonhoeffer in this book are scholarly and many might not be completely familiar with the terminology used in this book, the copious footnotes help serve to explain the more difficult concepts and terms in a way that will help the reader grasp what Bonhoeffer is getting across. This is an excellent resource for understanding matters of ontology and epistemology as they relate to sin and the individual’s relationship to God and the necessity of the cross.