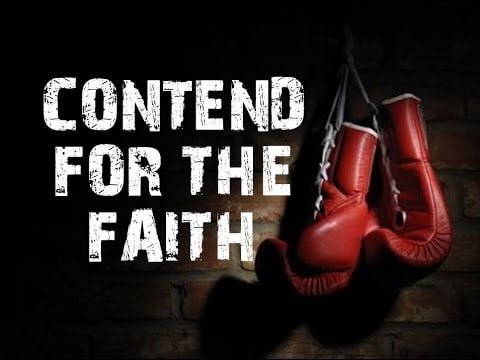 In this postmodern age of tolerance let’s be honest, contending is a word that denotes fighting, and fighting isn’t popular. More specifically within the church, the concept of fighting more often brings back ugly memories of a “worship war” or power struggle than it does standing up for truth. It’s about time for the church to redeem the biblical concept of contending for the faith. The truth about Christ must come back to the forefront of our battle cry. We must stand for the true gospel no matter what the cost!

So why contend for the faith?

No greater argument can be made than this.

Jesus Christ came down to earth, lived a sinless life, died a horrific death, and raised from the dead. He is the conquering King who calls hell-bound sinners to heavenly life! Jesus is the center of the Christian faith, and without Him, humanity is hopeless. Jesus is the only Way, the only Truth, and provides the only Life (John 14:6) that is worth living for, worth fighting for, and worth dying for.

Christ’s loving sacrifice was part of God’s perfect plan and redeemed man from the Fall. Even before sin had entered the world, Satan began his assault on truth and attempted to undermine the authority of God. In the Garden, he hissed to Eve, “You surely will not die! (Genesis 3:4-5) as he tried to convince her that God just didn’t her to be “just like Him.” Satan’s tricks have not changed for thousands of generations. He still seeks to undermine God’s Word through lies. At the core of his efforts is a motivation to divide people from the truth of the gospel, and conquer their soul. Contending for the faith pushes back against darkness with the weapons of warfare that Scripture commands we use (Ephesians 6:11-18).

Standing for the truth about Jesus Christ will cause conflict whether Christians like it or not. Jesus Himself explained why this conflict was going to be inevitable for His followers long before any modern apologist had contended for the faith:

Those are strong words from our Lord, but they undeniably affirm that He would be the center of controversy, conflict, and contention.

In all of this, He is worth fighting for and has called us to carry His message as ambassadors. Ambassadors act as an extension of the King and should anyone attempt to misrepresent the King or His message; an ambassador must fulfill his duty to the truth. In his letter to the Corinthians, the Apostle Paul declared,

Therefore, we are ambassadors for Christ, as though God were making an appeal through us; we beg you on behalf of Christ, be reconciled to God. He made Him who knew no sin to be sin on our behalf, so that we might become the righteousness of God in Him (2 Corinthians 5:20-21).

For the King and His kingdom, we must act as beacons of truth, and that means there will certainly be times when we must refute those who stand against our King.

2. BECAUSE THE BIBLE COMMANDS IT

Numerous imperative commands and Apostolic advice direct Christians to contend for the faith in the New Testament. Paul is the source of these (under the control of the Spirit as he wrote).

Here’s a just a short list of “to do’s” when it comes to contending for the faith:

There are a lot of things Christians would rather do than fulfill the list above. It often said that we should emphasize what we’re for rather than what we’re against. Singing songs to the Lord, fellowship, encouragement, evangelism, rest, and discipleship are all uplifting and even energizing ways to live out our faith in a positive way. No conflict. No mental drain. No danger.

Jude thought the same thing and had hoped to write about the wonderful fith that he had in common with fellow believers. But he soon realized that a serious situation required him to act out of necessity. He writes:

Beloved, while I was making every effort to write you about our common salvation, I felt the necessity to write to you appealing that you contend earnestly for the faith which was once for all handed down to the saints. For certain persons have crept in unnoticed, those who were long beforehand marked out for this condemnation, ungodly persons who turn the grace of our God into licentiousness and deny our only Master and Lord Jesus (Jude 3-4).

False teachers are those who Jude was describing as trying to creep in “unnoticed, ” and their entire purpose is to turn God’s grace on its head, deny Christ, and smear His name. And they do all of this as deceitfully as possible! Much like how Satan disguises himself as an angel of light (2 Corinthians 11:14), his false agents do not show up exclaiming, “Here I am to deceive you!” but rather they introduce destructive teachings that lead men away from Christ with subtlety. The more biblically illiterate the sheep, the easier it is to fool them. The more passive the sheep and leaders who refuse to contend, the easier it is for wolves to pluck them.

For the gospel sake, Paul was willing to be beaten, shipwrecked, robbed, wronged, and even didn’t care when men preached Christ out of selfish ambition as long as Christ was being preached. But step on the toes of sound doctrine or lead sheep astray from the true gospel and he would contend for the faith (Romans 16:17-18; 1 Timothy 1:20, 6:3-5; 2 Timothy 2:17). He was never one to back down when the truth was on the line. No Christian ever should.

3. BECAUSE MARTYRS HAVE DIED FOR IT

The life of Christ and the Scriptures are more than enough to inspire a true Christian to walk in obedience, but there are other important historical considerations.

Over the centuries contending for the faith has been no glamorous endeavor. Historically speaking, it’s widely understood that all of the apostles but John were brutally martyred. Other devout New Testament followers like Stephen were stoned to death (Acts 7:58-59). Then outside of the biblical canon, millions were tortured and killed for standing upon the foundation of Christ. A disciple of John named Ignatius (108 AD) was thrown to lions. Polycarp (156 AD) was set on fire. Perpetua’s (203 AD) judge begged her to deny Christ and live to feed her breastfeeding baby, yet she refused and was run by a bull then finished with a sword. Julian of Cilicia (249 AD) was put into a sack with serpents. Later on in the timeline of Christian history hundreds of Reformers were burnt and brutally tortured for opposing the Catholic system. Men like William Tyndale (1536) were strangled and burned at the stake but not before translating the Bible into English.

Today, our brothers and sisters in Christ still die for their faith in the midst of great persecution. Surely we can be willing to lose popularity for a faith that many better men and women have shed blood for.

4. BECAUSE THE LOST ARE WORTH IT

If there be any final consideration given to this topic, it’s this: that the lost sheep must be snatched from the wolves who prey upon them. If Christians have any semblance of evangelistic zeal, then they cannot sit silently while deception runs amok on the sanctity of sound doctrine. Contending is part of being a Christian.

Charles Spurgeon famously described the kind of perspective and the kind of effort that should mark Christian zeal. Even as the doctrine of election remained a pillar in his preaching, Spurgeon refused to lay aside his responsibility to obedience! He said:

“If sinners be damned, at least let them leap to Hell over our dead bodies. And if they perish, let them perish with our arms wrapped about their knees, imploring them to stay. If Hell must be filled, let it be filled in the teeth of our exertions, and let not one go unwarned and unprayed for.”

Jude finished his letter on apostasy with a sobering reminder that there is work to do even while darkness is allowed to operate under the sovereignty of God’s purposes. He pleaded:

But you, beloved, ought to remember the words that were spoken beforehand by the apostles of our Lord Jesus Christ, that they were saying to you, “In the last time there will be mockers, following after their own ungodly lusts.” These are the ones who cause divisions, worldly-minded, devoid of the Spirit. But you, beloved, building yourselves up on your most holy faith, praying in the Holy Spirit, keep yourselves in the love of God, waiting anxiously for the mercy of our Lord Jesus Christ to eternal life. And have mercy on some, who are doubting; save others, snatching them out of the fire; and on some have mercy with fear, hating even the garment polluted by the flesh (Jude 1:20-22).

It’s clear that passivism is not to be the church’s strategy when false teaching is harming sheep. Christians must do all they can to proclaim truth and refute the errors that lead people to believe in a false Christ.

Costi W. Hinn pastors at Mission Bible Church in Orange County, CA. His passion is equipping Christians to live boldly for Jesus Christ. Due to his background and expertise, he educates people around the world on strategies for dealing with prosperity theology. He is co-author of Defining Deception and his work has been featured on CNN and in Christianity Today. He resides in Irvine, CA with his wife and three children.