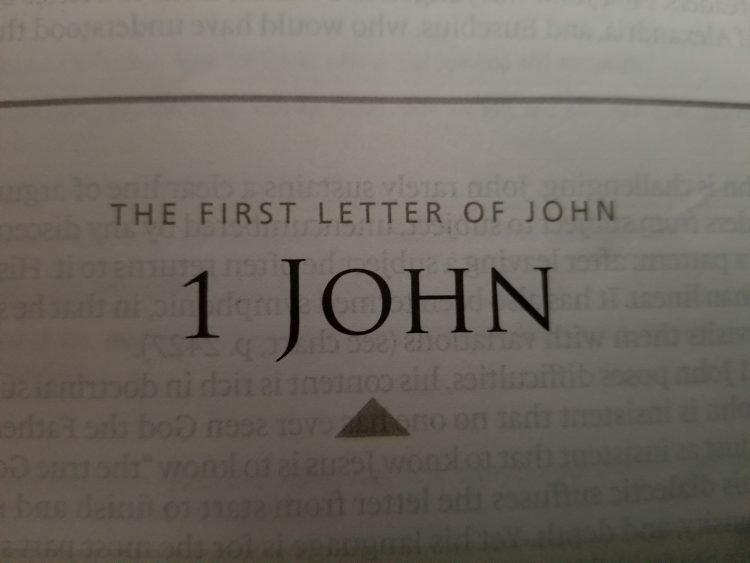 1 John 2:1, “My little children, I am writing these things to you so that you may not sin. But if anyone does sin, we have an advocate with the Father, Jesus Christ the righteous.”

It has been said that one of the most significant problems that plagues contemporary people is unresolved guilt. Sin squeezes the life out of unwitting victims. Sins of omission, sins of commission, sins of regret, neglect, fear, ungodly anger, broken relationships, and insubordination pose a massive threat to the well being of well-meaning people.

No one is excluded from this sinful parade. We have all committed sin. We are sinners by nature and by choice – and as a result, guilt rears its ugly head. Sometimes the guilt waits to surface until we’re all alone. For some of us, the guilt is a constant note on the musical score sheet of our lives. For others, the only time we feel guilt is when we hear a preacher remind us about our sin.

The sound of the gavel is unmistakable in a courtroom setting. When the gavel falls, it reminds us that a verdict has been reached. It announces the guilt or innocence of the defendant.

In 1 John 2, the apostle John ushers us into the celestial courtroom and answers the question, “What is the greatest need of sinners when the gavel falls?” As we enter the heavenly tribunal, I invite you to encounter the divine standard and the divine representative.

If you ever have the opportunity to attend a trial in a courtroom one of the first memories you will have is when the Judge enters the courtroom. The bailiff announces, “All rise!” John, the apostle, introduces the presiding Judge of the universe in 1 John 1:5. He writes, “This is the message we have heard from him and proclaim to you, that God is light, and in him is no darkness at all.”

The Presiding Judge of the Divine Standard

He is the majestic God of the universe. The psalmist proclaims, “O Lord, our Lord, how majestic is your name in all the earth! You have set your glory above the heavens” (Ps. 8:1, ESV). Moses says, “Who is like you, O Lord, among the gods? Who is like you, majestic in holiness, awesome in glorious deeds, doing wonders?” (Exod. 15:11).

He is the transcendent God of the universe. “For thus says the One who is high and lifted up, who inhabits eternity, whose name is Holy: “I dwell in the high and holy place, and also with him who is of a contrite and lowly spirit, to revive the spirit of the lowly, and to revive the heart of the contrite” (Isa. 57:15).

He is the sovereign God of the universe. The psalmist reminds us, “Our God is in the heavens; he does all that he pleases” (Ps. 115:3,). Daniel 4:34-35 says, “At the end of the days I, Nebuchadnezzar, lifted my eyes to heaven, and my reason returned to me, and I blessed the Most High, and praised and honored him who lives forever, for his dominion is an everlasting dominion, and his kingdom endures from generation to generation; all the inhabitants of the earth are accounted as nothing, and he does according to his will among the host of heaven and among the inhabitants of the earth; and none can stay his hand or say to him, “What have you done?””

And he is the holy God of the universe. “This is the message we have heard from him and proclaim to you, that God is light, and in him is no darkness at all” (1 John 1:5). The Psalmists adds, “But the Lord sits enthroned forever; he has established his throne for justice, and he judges the world with righteousness; he judges the peoples with uprightness” (Psalm 9:7–8). The heavenly Judge has the authority to issue the particulars of the divine standard. This is the divine standard we now turn our attention to.

The Particulars of the Divine Standard

John gives his readers an inside look at the motivation for his writing: “My little children, I am writing these things to you so that you may not sin …” (v. 1). John calls his readers to live holy lives, what he refers to as “walking in the light.” Notice the particulars, then, of this divine standard.

First, the call to holiness began in eternity past. Scripture reveals that God chose his people before the creation of the cosmos: “even as he chose us in him before the foundation of the world, that we should be holy and blameless before him …” (Eph. 1:4).

Third, we are called to conduct ourselves in a holy manner. “As obedient children, do not be conformed to the passions of your former ignorance, but as he who called you is holy, you also be holy in all your conduct, since it is written, “You shall be holy, for I am holy”” (1 Pet. 1:14–16).

To sin means to miss the mark, specifically in our relationship to God. The Westminster Shorter Catechism says, “Sin is any want of conformity unto, or transgression of, the law God.”[1] “Sin is disobedience to God’s revealed law,” writes Martyn Lloyd-Jones.[2] And John Piper summarizes, “What does not come from satisfaction in God, and through the guidance of God, and for the glory of God, is God-less – it is sin.”[3]

Since we fail to the divine standard in every respect, John introduces the Divine Representative.

The apostle John presents three marks of the Divine Representative: “My little children, I am writing these things to you so that you may not sin. But if anyone does sin, we have an advocate with the Father, Jesus Christ the righteous” (1 John 2:1).

First, Jesus is is righteous. The author of Hebrews helps us understand that the Divine Representative is sinless: “For we do not have a high priest who is unable to sympathize with our weaknesses, but one who in every respect has been tempted as we are, yet without sin” (Heb. 4:15). Jesus is without sin. Jesus is righteous.

Third, Jesus is our Advocate. An advocate is a helper or an intercessor. An advocate acts as a representative for someone. In this case, the advocate stands before the Father and represents sinners like you and me. This Advocate stands in our defense. He pleads our case. Lloyd-Jones adds, “Unlike a defense attorney who may argue that his client is innocent of all charges, this defense attorney recognizes your guilt before God. The Advocate turns to the Father and says, ‘… I am here just to remind You that the law has been fulfilled, that the death has been died, the punishment has been enacted; they are free because I died for them.”[4]

And so we fail to meet the divine standard. The Divine Representative stands in our defense. All these things clear the path for the divine accomplishment, which John unfolds in 1 John 2:2, “He is the propitiation for our sins, and not for ours only but also for the sins of the whole world” (1 John 2:2).

When the gavel falls, a verdict will be rendered. Will you bear the weight of your sin and thus, endure 10,000 degrees of white-hot wrath? Or will you trust Jesus to stand in your defense? When the gavel falls, will you stand condemned or will Christ’s sacrificial death pardon you, grant peace (Rom. 5:1) and welcome you into his presence where you will enjoy the pleasures of God forever (Ps. 16:11)?