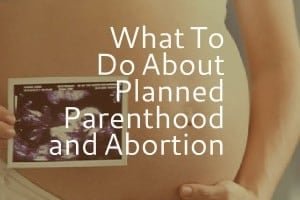 What To Do About Planned Parenthood and Abortion 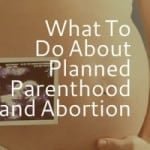 The news of late has been filled with the disturbing news of Planned Parenthood trafficking in the body parts of aborted babies. Anyone who has watched the horrific videos that have been circling around social media can’t help but notice the sickening glee by which the Planned Parenthood operatives rejoice over the opportunity to use these body parts as commodities. It really breaks my heart that anyone would view these precious unborn babies as nothing more than a means to an end. This anger thankfully is being shared by many across the country.

There is arguably more of an opportunity to effect change at the state and local level as the appetite to restrict abortion services seems to be more likely there. Even still, Planned Parenthood is all over the country and has their tentacles extended into all levels of government, supporting financially those candidates who are in favor of the murder of unborn babies in the name of women’s health.

This can all seem very discouraging, namely trying to defund a monstrosity such as Planned Parenthood and abortion. So again….what can one do? I have one suggestion – get involved in supporting adoption and those who offer those services at the local, state, and national levels.

I am the parent of an adopted child so the issue of adoption is very near and dear to my heart. In reality, it should be near and dear to every believer’s heart given the fact that God rescued us from the clutches of sin and death and adopted us as His children. To extend a loving and helping hand to an unwed mother, to a parent who cannot care for their child for whatever reason, to a child who was mistreated by their birth parents and is looking for the loving arms of parents who care – these are things God desires for His people to be about doing.

Even if God has not called you to adopt a child, you can certainly assist those who have been called either financially or through others means of support. You can volunteer at a local adoption agency or crisis pregnancy center. You can be involved in Boys and Girls clubs or inner city ministries that service those whom Planned Parenthood attracts. Churches as a whole can sponsor families interested in adoption. Let me tell you that adopting a child is not cheap. There are many fees (in the thousands of dollars), training that costs money, let alone outfitting your home for a child. The body of Christ can begin to put their money where their mouth is so to speak by investing in families who in turn are investing in the lives of children, both born and unborn.

This is an opportunity for us to act in a way that mirrors how God acted on our behalf. It is a chance to show love and mercy for those who are being targeted for death. Abortion is indeed the murder of the innocent. We should not stand idly by while precious children are being slaughtered and their body parts sold. Political action is certainly one method by which to address this atrocity. However, on a more practical level, we can be involved personally in the lives of those in our community, perhaps even opening our homes to a child and raising them in the fear and admonition of the Lord.

What say you? Are you willing to do more than be angry at YouTube videos and new reports? Are you ready to act on behalf of the defenseless? Are you ready to invest in the lives of people who need help and who might feel the only alternative is abortion? The time to act is now. Encourage your local church to become involved with local adoption agencies and crisis pregnancy centers if they are not already. If they are involved and you are not involved as well, the time to become a part of the solution is right now. Do more than just write a check. Mentor young men and women. Reach out and help those in need, the unborn, the born, and those who are looking for answers. Righteous anger needs to lead to impactful action.

Will you do it?