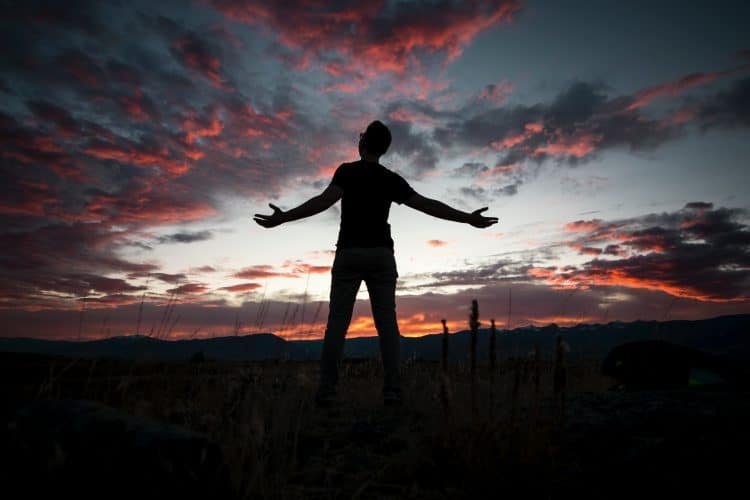 by Justin Huffman | Feb 6, 2018 | The Gospel and the Christian Life, Featured

When Charles W. Eliot was president of Harvard University, he was given the privilege of dedicating a new hall of philosophy. He searched for and pondered over the appropriate inscription to place above its entrance. His faculty members (among them the renowned philosopher William James) were called together and, after much deliberation, they agreed upon the well-known Greek phrase from Protagoras: “Man is the measure of all things.” With that decision finally made, they adjourned for the summer. When school reopened in the fall, you may imagine their chagrin to find that the president had decided on a different motto. As the great inscription over the entrance to Eliot Hall was unveiled, there for all to read were the words of David in Psalm 8:4: “What is man that Thou art mindful of him?”

How powerfully these words of David fly in the face of the common wisdom of our day. While man has been growing greater and greater in his estimation of himself, God has been proportionately waning in the sight of men—as we see evidenced in the movies, literature, and practical philosophy of the public today.

Even in religious circles, the best-selling books are not about God but reflect an evident self-interest, and selfish concern, with titles like God, Wants You To Be Rich, Your Best Life Now, and Look Great, Feel Great. Last year George Barna reported that when even pastors listed the most influential books that they had read, only 9% listed a book about theology (the study of God). As someone has said, had Eliot Hall been built today our philosophy would be better represented with the words “what is God, that thou art mindful of Him?”

The Bible, by contrast, is completely God-centered. It is good for us to remember this especially as Christians are daily inundated by an egocentric culture. The Bible assumes God’s existence; it does not set out to prove His existence, but instead assumes Him as a given in the universe from the beginning, from the very first words of its pages: “In the beginning God…” (Genesis 1:1). The Bible goes on to call atheists fools in Psalms 14:1: “The fool says in his heart, ‘There is no God’.”

The Bible teaches that God has made himself known to all humankind, by means of His marvelous handiwork in creation (Romans 1:18-20; Psalm 19:1); we are therefore completely without excuse when we try to pretend that He does not exist, or make decisions that ignore His hulking presence in the universe.

The Bible reveals that God is the singular, set-apart, autonomous Creator of everything and everyone else besides himself. This act of almighty, ex nihilo creation is second only to redemption in the Bible as a subject of prominence and  is a reason given by  God for Him to receive glory and obedience from every human being: “Let all the earth fear the Lord; let all the inhabitants of the world stand in awe of him! For he spoke, and it came to be; he commanded, and it stood firm” (Psalm 33:8, 9). Even salvation is compared to creation, because of its otherwise unparalleled display of omnipotence and sovereignty (2 Corinthians 4:6; 5:17; Ephesians 2:10).

When Israel rebelled against the kind commandments of God, one of the chief accusations brought against the nation was “Israel has forgotten his Maker” (Hosea 8:14). As the Creator of the world, God is the only being in the world Who should be and is rightfully and relentlessly self-lauding. Over and over again, we are reminded that God has created the universe, and everyone in it, for His own pleasure: “The Lord has made everything for its purpose, even the wicked for the day of trouble” (Proverbs 16:4). “You created all things, and by your will they existed and were created” (Revelation 4:11). “From him and through him and to him are all things. To him be glory forever” (Romans 11:36).

As the Creator and Sustainer of everything and everyone else, God is the one and only sovereign in the universe. Even after God created Adam and gave him the job of naming the animals, it is worth noting that Adam was never given the opportunity to name the inanimate creation, only the animate. God himself named the Day, the Night, the Heavens, the Earth, the Seas (Genesis 1:5, 8, 10), perhaps in order to remind us that we will never have anything other than borrowed power or authority; He made all things and so every day, and every night, are His disposing.

Although the question of meaning, purpose and of existence, has been posed almost to the point of cliché, it has rarely been posed with a genuine desire to know the answer. Who are we? Why are we here? What is our purpose?

Interestingly, the Bible informs us that we can only know the answer to this question, as we learn our position in this changeable universe in relation to its vast and unchanging Center and Creator. Only as we recognize ourselves as creatures will we realize our meaning and purpose and existence comes from our Creator. While our culture suggests, we are merely mindless chemical and biological accidents in a mindless and purposeless cosmos, the Bible teaches that as creations of a purposeful and intelligent Creator, we can rest assured that we have purpose because of the image of God in man.

The Bible makes it clear that our purpose is to reflect the glory of God that has been shown to us—from His majestic creation to His marvelous mercies—back to God in the form of conscious and enthusiastic praise. Consider now the entirety of Revelation 4:11, quoted above: “Worthy are you, our Lord and God, to receive glory and honor and power, for you created all things, and by your will they existed and were created.”

Sadly, because humankind fell from the perfect state in which God created us, no man or woman will ever perfectly fulfill this purpose in this life. Yet, our goal should be to reflect His glory as perfectly and as purely as we possibly can, by becoming more and more like Him in our way of life, attitudes, thoughts, and desires.

Also, we are told that this praise in Revelation is given to the one who is sitting on the throne of heaven, God the Father. But it is also made evident that we cannot praise the one on the throne if we are not also willing to praise the Lamb of God, Jesus Christ: “Every creature in heaven and on earth and under the earth and in the sea, and all that is in them, [said], ‘To him who sits on the throne and to the Lamb be blessing and honor and glory and might forever and ever!’” (Revelation 5:13).

The Son is inseparable from the Father, whether in the great act of Creation or in receiving praises from those creatures: “All things were made through him, and without him was not any thing made that was made” (John 1:3). “All things were created through him and for him” (Colossians 1:16).

Let that thought sink in… you were created for Jesus Christ! And each of us is called to render Him the praise that He is due. This is our purpose; this is the only thing that will give our life true and lasting meaning.