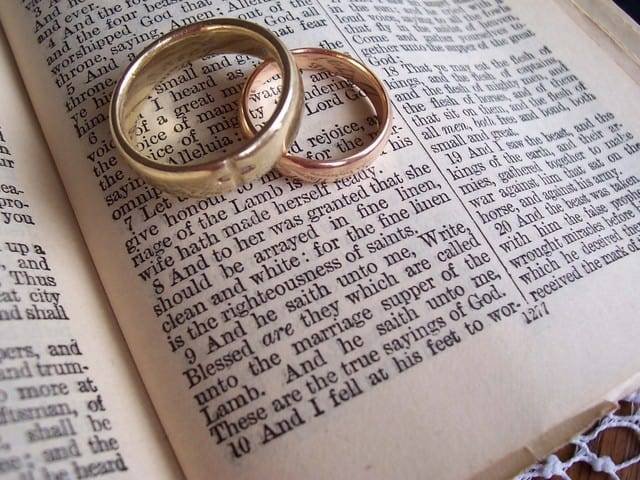 “For when Solomon was old his wives turned away his heart after other gods…” 1 Kings 11:4

One of the great privileges of pastoral ministry and biblical counseling is the role of mentor and guide to couples who are engaged or considering marriage. In a culture that mocks and scoffs at the biblical vision for marriage, helping those who desire to honor the Lord and put the Gospel on display through their marital covenant is a joy (Eph. 5:32).

But, with the privilege of sending many couples down the aisle toward holy matrimony comes tremendous pastoral responsibility. There is more to biblical marriage; we are to be reminded, that one-man-one-woman composition, romantic feelings, sexual compatibility, and similar interests and hobbies.

Just Say No (or Not Yet)

To the extent that pastors and biblical counselors influence the decision of couples to marry, they must also be prepared to provide a prophetic voice of sorts by speaking the truth in love to those who are not (or who are not yet) good candidates for marriage (Eph. 4:15).

Pastors and biblical counselors then have a type of responsibility to both caution against marriage and to withhold their participation when and if necessary. Unwise decisions for marriage must be avoided before they are made. This can be an emotionally charged but necessary action to be taken with wisdom and discernment by the one providing pre-marital counseling and received with grace by the couple in question (Heb. 13:17).

It has been said that indifference rather than hate is the opposite of love, and when it comes to pre-marital counseling, the gravity of the decision at hand demands that pastors and biblical counselors be anything but indifferent. Sometimes, saying “no” or “not yet” is the most loving answer the pastor-counselor can give to the prospective couple.

God’s Word provides for us an important question to be asked in the context of biblical pre-marital counseling. We extrapolate this question from a telling passage about the life of King Solomon in 1 Kings 11:1-8.

Solomon was perhaps, second only to his father, David, the most famous of all of Israel’s earthly kings. Blessed by God with immeasurable wisdom, his was a kingdom marked by unmatched wealth and influence (1 Kings 4:20-34). But, for all of Solomon’s great wisdom, he was not sinless. And, his sin would have a tremendous influence on the life of the nation he was charged by God to lead.

One of Solomon’s very public and well-documented sins was the practice of polygamy and sexual immorality. Solomon literally had hundreds of wives and hundreds of concubines. What made matters worse was Solomon’s proclivity to take for himself wives from other nations which God had previously commanded all of Israel to avoid (1 Kings 11:1-3).

Solomon’s own life would become the “poster-child” for God’s purpose in this loving prohibition which would be carried over by Paul in the New Testament for followers of Jesus to obey (Deut. 7:3-4; 2 Cor. 6:14).

For Solomon, the net result of not only polygamy but wedding himself to those who worshipped the world’s false gods was a life and legacy corrupted by idolatry and rebellion against the Lord (1 Kings 11:4-6).

Due in part to his very unwise attitude toward marriage, Solomon’s heart was turned away from the one true and living God. Tragically (and avoidably), Solomon became like those who worshipped the idols of nations made by human hands (Psalms 135:15-18).

What if, in his wisdom, Solomon had sought godly counsel to inform his martial decision-making and in so-doing had been forced to answer this critically important question:

How does this relationship and potential marriage turn your heart and the heart of your potential spouse away from the false gods of the world and toward the living God of Scripture?

Hopefully, you recognize this question as the inverse of what we are told became of Solomon in 1 Kings 11:4. It is a question that every engaged couple must answer and answer well if they are to live out Paul’s foundational statement about marriage as a beacon for the Gospel (Eph. 5:32).

Among other things, Solomon is known for having been inspired by God to write much of the Book of Proverbs. Proverbs is, of course, full of wisdom sayings to help guide us in life. One of the more memorable proverbs written by Solomon teaches us that “Without counsel, plans fail, but with many advisers, they succeed” (Prov. 15:22).

In light of what we learn about Solomon in 1 Kings 11:1-8 and about the plans we make in Proverbs 15:22, we applaud those who desire to honor the Lord in marriage by submitting themselves and their relationship to a season of pre-marital counseling.

While there is always some risk in exposing the desires of our hearts to God’s Word, we can always trust that He has His glory and our joy in view.

Whether in marriage or in singleness, His desire is always to turn our hearts toward Himself in the person of His Son, Jesus Christ, to whom we as believers are already united and eternally wed. By seeking to live in faithfulness to His word as regards earthly marriage, we prove ourselves to be His faithful bride.