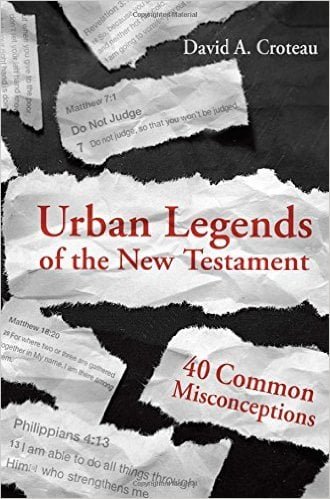 Urban Legends of the New Testament

Most people likely remember the childhood game called telephone. The concept was to start with a statement which would then be repeated down a line of individuals with that statement whispered into each subsequent person’s ear. The fun part of the game was seeing how far off at the end things had become. Typically the result is quite humorous. To some degree, this is how legends take hold. Something is passed down, or a belief is spread from one person or group to another. On many occasions, the truth that was first passed down becomes diluted, or other elements are added in along the way. Over time, the altered truth becomes the accepted norm. This phenomenon, unfortunately, takes place when it comes to Scripture.

David Croteau, in his informative and helpful book Urban Legends of the New Testament, takes a look at some supposed truths that we have grabbed hold of and believe as fact. As the tales are investigated, it is readily apparent that we have played a bit of the game of telephone when it comes to our understanding of various points located in the New Testament.

This book is divided into two parts with the first part engaging urban legends in the Gospels and the second part looking at what has crept into our understanding of Acts, the Epistles, and Revelation. What Croteau presents to the reader may at times come as a surprise given it is highly likely you have always believed the text actually said something when in reality it does not.

A couple of urban legends I found rather interesting were “Do not judge others” and “Women should not wear jewelry.” Now the first is commonly misunderstood and misapplied. Speak out against a societal ill and you will more times than not be slapped with “Doesn’t the Bible say not to judge others?”. Among the many things, I appreciated in this section is how Croteau invokes the declaration of Inigo Montoya in his engagement of this legend given the idea of judging that many purports exists are completely absent. As Croteau aptly notes, the judgment being discussed is not the type of judgment that can only be provided by the Judge. In reality, it is speaking of being discerning, of understanding the world around us. It also speaks of not being quick to condemn or “to try and play God.”

Speaking of judging, what about women wearing jewelry? Isn’t that forbidden in Scripture? Croteau unravels this urban legend by providing a lesson in Greco-Roman culture in Peter’s day. The reality is Peter was addressing the wealthy women in the church who seemed to have a tendency to draw attention to themselves and their wealth through the amount of fancy clothes and jewelry they wore. Peter is not prohibiting wearing nice clothes or wearing jewelry for that matter. He is speaking to the issue of vanity and trying to impress husbands and others that matter with their outward appearance. While there is nothing wrong with physical beauty, Croteau correctly notes “Men should value inner beauty more than external beauty” and Peter’s command helps women help men do just that.

I thoroughly enjoyed this book. It is chock full of salient exegesis and more importantly, Croteau provides tons of practical application for his readers. Furthermore, the bibliography provided at the end of each chapter will help the reader dig even further into each legend/topic. I highly recommend this book for all believers.

I received this book for free from B&H Academic and the opinions I have expressed are my own. I am disclosing this in accordance with the Federal Trade Commission’s 16 CFR, Part 255 : “Guides Concerning the Use of Endorsements and Testimonials in Advertising.”