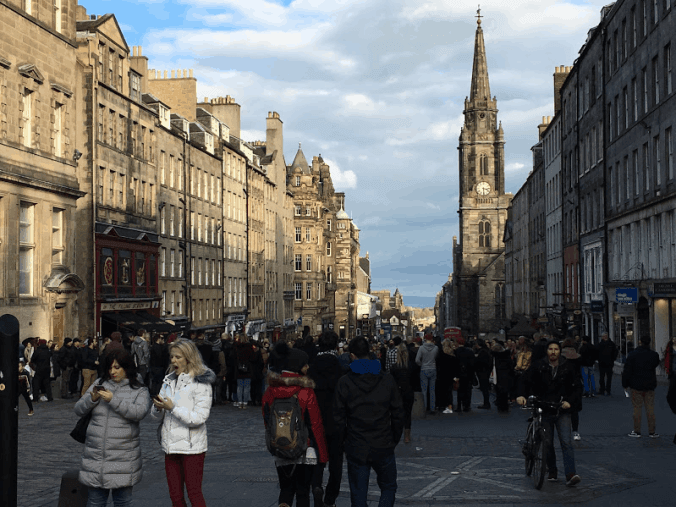 My wife and I recently spent five days in Edinburgh, Scotland. While there is much to commend in this very beautiful city, it did not take long to realize that God is no longer welcome for many of the inhabitants there.

On the last evening in Edinburgh, I watched a young street preacher proclaiming the gospel from a makeshift podium on Royal Mile Street, which stands in the shadow of St. Giles Cathedral. Here, the mighty John Knox wielded the mighty sword of God’s Word, which brought Reformation to Scotland in the sixteenth century. Knox prayed, “Give me Scotland or I will die,” demonstrating his great love for God and his countrymen.

However, the days of the Reformation are long gone in Scotland. The scoffs of the crowd which were directed at the street preacher bore witness to that:

These emotionally charged questions were all hurled at the street preacher who merely sought to proclaim the simple message of the gospel.

I stood and prayed for the young man who heralded the truth. I asked God to soften the hearts of this angry mob. In the midst of my petition, the thought struck me; This is the same kind of crowd that Noah encountered. These are the same kinds of people who spewed their venom at Jeremiah and Jonah. And these are the kinds of people who hurled their hate against the New Testament apostles.

Nothing has changed. There is nothing new under the sun. The hearts of men are continuously evil (Gen. 6:5). “The heart is deceitful above all things, and desperately sick” (Jer. 17:9). Ever since the fall of man, sinful people continually suppress the truth (Rom. 1:18).

The angry mob who squared off against the preacher in Edinburgh willingly exchanged the truth of God for a lie. The Bible says unregenerate people realize that God exists; yet they refuse to acknowledge him: “For although they knew God, they did not honor God or give thanks to him, but they became futile in their thinking, and their foolish hearts were darkened” (Rom. 1:21).

And so I watched a tragic scene unfold on Royal Mile Street in Edinburgh. I watched a frenzied mob reject the truth from a “voice in the wilderness.” I gazed upon a group of worshippers who willingly turned from the God of the Bible to a god of their own making.

A few thoughts echoed in my mind and pressed against my heart as I stood on Royal Mile Street in the heart of Edinburgh:

First, the unbelieving world who preaches “tolerance” fails to be tolerant when the truth is proclaimed. Tolerance is only a virtue when it lines up with a worldview that rejects God, turns from His law, and marginalizes His Word. The “tolerance mantra” is a smokescreen, in the final analysis. Anyone who repudiates the truth claims of Scripture is tolerated. But anyone who embraces the propositional truth of God’s Word is cast aside and criticized.

Second, followers of Jesus Christ are called to proclaim the truth faithfully. Most will be unwilling to stand on a makeshift platform and herald the gospel to a hostile crowd. But how many of us could utter the claims of Christ over a cup of coffee? How many of us could share the love of Christ in the workplace? Who among us could challenge the pagan mind with the gospel truth in the marketplace of ideas? Paul understood this mandate to faithfully proclaim the truth: “How then will they call on him in whom they have not believed? And how are they to believe in him of whom they have never heard? And how are they to hear without someone preaching? And how are they to preach unless they are sent? As it is written, ‘How beautiful are the feet of those who preach the good news!’” (Rom. 10:14-15).

Third, when the truth is faithfully proclaimed, the unbelieving world will invariably become offended. The Edinburgh preacher recognized this reality when he stepped upon his makeshift platform. He realized that he would be opposed. He realized that he would be scoffed at. And he realized that the crowd would laugh. Scripture warns us that in the last days, people will not put up with sound doctrine (2 Tim. 4:3). The Bible says people will “accumulate for themselves teachers to suit their own passions, and will turn away from listening to the truth and wander off into myths” (2 Tim. 4:3-4). Tragically, we will not only find these kinds of people in the public square; we will also find them in the church.

In his book, Get Real: Sharing Your Everyday Faith Every Day, John Leonard argues that people have stopped listening to the gospel “because we want to share it in the least inconvenient, least costly way. We want to save dirty people at a distance.” Leonard has touched upon an important truth. And we can certainly do a much better job of sharing the gospel up-close. But the real reason for their resistance to the truth is a rocky, stubborn, and unbelieving, sinful heart! Our task is to faithfully share the truth and trust the Holy Spirit to soften hearts and effectually draw sinners to the Savior (John 6:44).

Finally, bold proclamation invites persecution. Indeed, all who desire to live a godly life in Christ Jesus will be persecuted” (2 Tim. 3:12). Scripture reminds us, “And after you have suffered a little while, the God of all grace, who has called you to his eternal glory in Christ, will himself restore, confirm, strengthen, and establish you. To him be the dominion forever and ever. Amen.” (1 Peter 5:10–11, ESV) The promise of persecution should not hinder our passion for proclaiming the truth. Rather, this reality should embolden our efforts to wield the mighty sword of truth!

Was the angry mob who ridiculed the preacher a fair representation of the feelings of the Scottish people? Were their harsh words and cackling laughs an accurate portrait of the people living in Edinburgh? Since I only met a handful of people in our brief stay, I cannot answer this question with any clarity. However, the Word of God informs us that what I saw on that cold winter afternoon is representative of the unbelieving world.