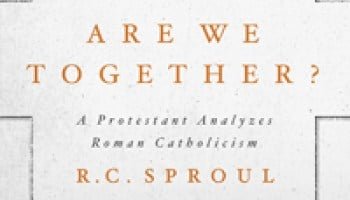 Are We Together? A Protestant Analyzes Roman Catholicism by R.C. Sproul

There are at least 1.2 billion Roman Catholics in the world – a stunning number to the unsuspecting. It would be a massive understatement to confess that Rome has had and continues to have a titanic influence on Western thought and culture.

In recent years, some evangelicals have taken steps to bridge the divide between the Roman Catholic Church and Protestantism. Evangelicals and Catholics Together (ECT) is the most well-known statement that sought to unify the two camps. More recently, the Manhattan Declaration: A Call of Christian Conscience made attempts to unify the two groups.

The efforts to bring unity is commendable but misguided as these two documents fail to account for the unmistakable doctrinal divide between Rome and Reformation principles. R.C. Sproul addresses these important topics in his book, Are We Together? A Protestant Analyses Roman Catholicism.The author analyses six critical areas of disagreement between Rome and evangelicalism. He addresses scripture, justification, the church, the sacraments, the papacy, and Mary. Each topic is addressed in separate chapters and includes Rome’s stance which is contrasted with the biblical view of Protestantism.

Sproul’s work is historically accurate and biblically sound. While he does not address the matter comprehensively, he does tackle the most important matters in the church. In that sense, he leaves no stone unturned. The book is a terrific introduction to the Roman Catholic Church and should be digested by every evangelical. Sproul is gracious in his assessment of Rome. Yet, he is not afraid of speaking candidly about the numerous doctrinal errors that have been and continue to be promulgated by Rome.

At the end of the day, readers will become aware of the grievous doctrinal errors of Rome and encouraged to embrace the teaching of the Reformers. Indeed, the crux of the matter is the gospel. Sprout affirms, “I am happy to make common cause with Roman Catholics on social issues, but we have no common cause in the gospel. Rome has compromised the gospel with her unbiblical doctrines. I firmly believe that she is ‘teaching as doctrines the commandments of men.’”

I commend Are We Together? A Protestant Analyses Roman Catholicism and trust that many readers, both Roman Catholic and Protestant alike will be encouraged by the biblical reality that is presented in this powerful little book.

I received this book free from the publisher. I was not required to write a positive review.

On today’s episode, a listener writes in and asks me, “Why is theology for all of life?” What you’ll hear in this episode Theology is for the Worship of God. Theology is for Service. Theology Helps Christians Mature in Christ. Theology Is for All of Life...

A Review of Wondrous Works of God: A Family Bible Story Book

Wondrous Works of God: A Family Bible Story Book, by Starr Meade is a well written and a nicely illustrated (by Tim O’Connor) storybook. It has many thoughtful questions and promptings for families to use during Bible study time. As someone who has a young nephew, I...

They Could Not Endure

Hebrews 12:20–21, “For they could not endure the order that was given, “If even a beast touches the mountain, it shall be stoned.” 21 Indeed, so terrifying was the sight that Moses said, “I tremble with fear.” One of the prevalent themes of the epistle to the Hebrews...