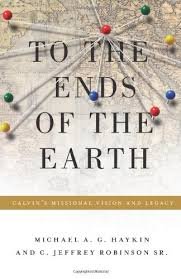 To The Ends Of The Earth: Calvin’s Missional Vision And Legacy

Chapter one looks at John’s missional focus in his teaching. Chapter two looks at the dynamics of Calvin’s view of missions. Chapter three looks at missions to France and Brazil. Chapter four explores the Puritans missional efforts in the 17th century. Chapter five looks to the example of Jonathan Edwards and missional prayer. Chapter six looks at Samuel Pearce and developing a missional passion.

John Calvin is rightly known as one of the leading voices of the Reformation. What is often missed is that he was also a pastor with a heart for missions. As the author explore in this book, Calvin and his successors had a biblical and practical view of missions that pulsated throughout their entire work. To the Ends of the Earth is a very helpful book for those wondering exactly how Calvinists view missions. Calvinists have been leading voices in the mission’s movement since the Reformation. Their work has not only made an impact in a variety of fields but in some cases has helped unearth fresh insights in a variety of fields.

Whether you’re new to Calvinism or you question the legitimacy of Calvinism, To The Ends of the Earth has something for you. This fascinating and helpful study will open new insights into the study of Calvinistic missionaries while helping you understanding more of what the Bible teaches about the vital topic of missions. Through a close look at John Calvin’s life, writings, and his successors, the authors reveal a passion for the spread of the gospel and the salvation of sinners. The authors sweep away longstanding stereotypes related to the Reformed tradition and Calvin’s theological heirs, highlighting the Reformer’s missional vision and legacy. This well-written, and well-researched book not only helps set the record straight it will stimulate those inside and outside the Reformed tradition to heed the Great Commission by the grace of God.

Buy the book at Amazon

Title: To The Ends Of The Earth Calvin’s Missional Vision And Legacy