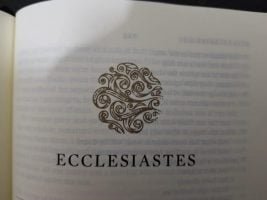 Solomon is considered the wisest person in the ancient world, and possibly in world history. After David, his father, died he ascended to the throne of Israel. Early in his reign, the Lord appeared to him and promised to give him anything he asked. Wisely, the young king asked, “give your servant therefore an understanding mind to govern your people, that I may discern between good an evil, for who is able to govern this your great people?” (1 Kings 3:9, ESV). What a prayer! Yet, in the book of Ecclesiastes, after reflecting on his wisdom, he second-guessed its usefulness “under the sun.” Wisdom, like anything good gift, is only useful when it is not seen as ultimate. Three principles regarding wisdom are seen in Ecclesiastes 2:12-17.

Wisdom is Better Than Folly

When given a choice, it is better to seek wisdom than folly. Solomon observes, “I saw that there is more gain in wisdom than in folly, as there is more gain in light than in darkness” (Ecclesiastes 2:13, ESV). Yet, wisdom is not natural. It must be sought after and acquired over time. Truthfully, wisdom is a gift from the Lord that comes through walking faithfully with Him. The books of Proverbs and Ecclesiastes are full of testimony from an older man, most likely Solomon, to a younger man. His basic sentiment is “been there, done that, it’s not worth it.” The temptation of the young and naive is to try things out for themselves. They want to learn by hard knocks and not the testimony of someone who has experience. In this life, however, it is much better to walk in wisdom.

Wisdom is described, in this passage, as walking in the light. Throughout the Bible, wisdom is synonymous with knowing God. As it says in Proverbs 9:10, “The fear of the Lord is the beginning of wisdom, and the knowledge of the Holy One is insight.” This description fits what the Apostle John says, “God is light, and in him is no darkness at all” (1 John 1:5, ESV). Just as worldly wisdom comes through life experience, spiritual wisdom comes through daily walking with God.

Death is the Great Equalizer

It has often been said that “in this world, nothing can be said to be certain, except death and taxes.” Though this saying rings true, it is only partially true. A person can be successful at evading taxes, though it is nearly impossible. A person cannot, however, evade death. As Solomon observes, “the same event happens to them all” (Ecclesiastes 2:14). The writer of Hebrews puts it this way, “it is appointed for man to die once, and after that comes judgment” (Hebrews 9:27, ESV). In the end, each person will stand before God, no matter if they lived wisely or foolishly. Death is the great equalizer. This is why Solomon experienced great frustration in his journey to seek satisfaction. He observed that no matter the manner a person chooses to live their life, in the end, they will die. The key to overcoming the frustration that Solomon experienced is to live for more than what can be experienced “under the sun.”

Wisdom is Preparation for Eternity

In his journey, Solomon hasn’t yet gotten to God. He has been seeking satisfaction in worldly endeavors, which explains his frustration. Toward the end of the passage at hand, he states that because both the wise and fool dies, he came to hate life. Such a statement comes from a person whose focus is on the temporal. Elsewhere in Ecclesiastes, however, he states “[God] has put eternity into mans heart” (Ecclesiastes 3:11). Godly wisdom brings an eternal perspective. It may be true that when most people die, “there is no enduring remembrance” of them (Ecclesiastes  2:16). What truly matters, however, is not if a person is remembered after they die, but that their names are written in heaven. (Luke 10:20). To come back to the first point for a moment, it is for this reason that it is better to choose wisdom than folly. Both have an eternal impact. Wisdom, however, is the only one that promises eternal pleasure.

Exhorting the believers in Ephesus, the Apostle Paul writes, “Look carefully then how you walk, not as unwise but as wise, making the best use of the time because the days are evil. Therefore do not be foolish, but understand what the will of the Lord is” (Ephesians 5:15-17 ESV). Knowing the will of God comes through wisdom. It is for this reason that choosing to live a life based on godly wisdom has more impact than merely what is seen. The believer is to walk in wisdom because the days are evil. In this modern age, it is easy for a person to be distracted and drift away from walking with the Lord. It is more important than ever for believers to walk in wisdom. Eternity is just around the corner.