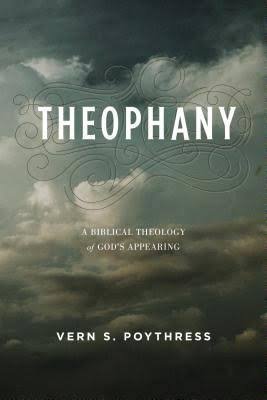 “A theophany is a manifestation of divine presence accompanied by an extraordinary display mediating that presence.” This is the primary goal of Vern S. Poythress in his recent book, Theophany: A Biblical Theology of God’s Appearing.

Theophanies, according to the author have three primary functions: (1) They manifest God’s character and glory. (2) They remind us that God is with us. (3) They fill us with a sense of holy anticipation for the final coming and appearance of God.

“In short,” writes Poythress, “God is present everywhere and at all times in the created world that he has made.” Theophany is arranged in five sections as outlined below:

Part I: The Biblical Theme of God Appearing

Part III: A History of God Appearing in the Old Testament

Part IV: A History of God Appearing in the New Testament

Using this framework, the author guides readers on an enthralling journey that presents God from cover to cover. A threefold theme emerges throughout this book that alert readers to the promises of God, his covenants, and the presence of God. Ultimately, the appearances of God foreshadow the appearance of God in Christ, whom Poythress says is the “permanent and climactic theophany.”

I highly recommend Theophany and trust that many will be encouraged and edified as they come face-to-face with the God of the Bible.