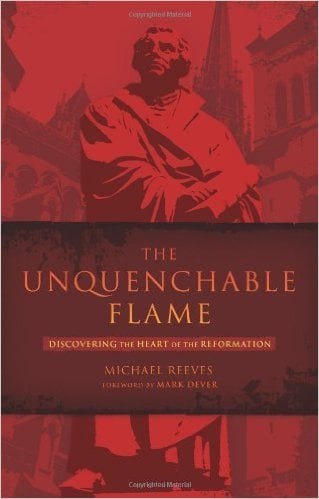 The Unquenchable Flame: Discovering the Heart of the Reformation by Mike Reeves

by James Forbis | Oct 31, 2017 | 500 Years of the Reformation: Why We Need Revival and Reformation Today, Featured, Theology For Life

The Unquenchable Flame: Discovering the Heart of the Reformation

The Unquenchable Flame: Discovering the Heart of the Reformation, by Michael Reeves, may be the most important book you can read this year in preparation for (or in celebration of) the 500th anniversary of the Reformation on October 31st. Although this book was published and released in 2010, it is important for pastors, lay leaders, and Christians of all stripes to be familiar with, and understand why, the Reformation still matters and must continue on.

Reeves does a masterful job weaving the narrative of Martin Luther’s defense before the imperial council at Worms, to Ulrich Zwingli and the Radical Reformers, to the man who all Calvinist look to as their patriarch, John Calvin. In addition, the author looks at the Reformation of Great Britain and the English royalty. What Reeves does is blend history with the flair of a modern day TV drama that has plot twists and cliffhangers galore to keep the reader on the edge of his/her seat throughout the entire book.

This book is critical for pastors to read because it gives them a very good swath of church history, which is important for understanding why Protestants believe the things they do, and how to correct false teaching that comes from the Roman Catholic Church to this day. Pastors will be wise to take careful notes of chapters one and two, because it is here that Reeves sets the proverbial stage for his narrative. It is also where he explains the key reasons for the Reformation occurring. From the teaching of indulgences, purgatory, the necessity of Catholic Mass for salvation, Reeves covers it all succinctly.

This will give pastors and lay-leaders a strong historical-theological background for the birth of the Five Solas, along with the importance to keep teaching these core doctrines of the Protestant faith. Without the Reformation occurring and men like John Calvin, Martin Luther, and William Tyndale, who risked their lives and reputations for the Word of God, we would still be under the auspicious ruling of the Roman Catholic Church.

Without Tyndale giving his life for translating much of the Bible into English in 1526, it’s safe to say that the Reformation in England wouldn’t have occurred when it did. Tyndale laid the foundation of reform that people like Thomas Cranmer, John Dudley, and the most famous English Protestant—Queen Elizabeth I—built off of.

One of the best hidden gems of this book is the timeline in the back that gives a quick overview of the most important dates and events that occurred during the Reformation. It really speaks volumes of the grace of God during these times.

The Reformation is not over. We should constantly be reforming and refining our theological convictions and positions to be more in-step with the Bible. This book offers a charge in the last chapter to do just that, to keep learning and teaching sound doctrine. All Scripture is profitable for teaching, correction, reproof, and the very divine Word of God speaking to us.

It’s important that we thank God for where our faith originated, who fought and gave their lives to defend the faith, delivered once for all the saints. Finally, it’s important to continue this legacy so that we can fight heresy and false teaching before it creeps over the thresholds of our churches and into the heart and souls of our congregants. Like Luther before the imperial council and the Emperor Charles V of the Holy Roman Empire, we must boldly proclaim our faith, contend for the faith, and should the Lord tarry till long after you or I are dead, this should be our testimony and our confession:

“I am bound by the Scriptures I have quoted and my conscience is captive to the Word of God. I cannot and I will not retract anything since it is neither safe nor right to go against conscience. I cannot do otherwise, here I stand, may God help me, Amen!” – Luther, April 16th, 1521, Worms, Germany.