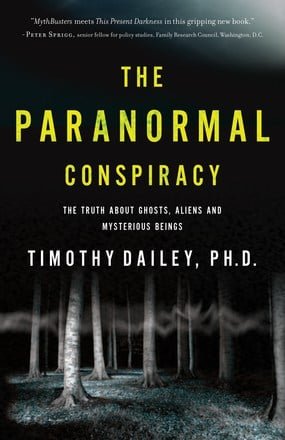 The Paranormal Conspiracy: The Truth about Ghosts, Aliens and Mysterious Beings 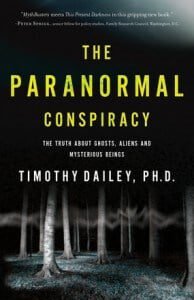 Tales of UFOs, Bigfoot, and journeys to another universe to meet ascended masters and beings from other planets in distant universes or even alternate planes of existence. Are they just the vivid imaginations of science fiction developed from misguided individuals? Are they real life experiences albeit hard to comprehend to the average individual? Or are they the product of spiritual forces bent on warping and twisting minds in an effort to lead humanity down a path of mental, physical, and society destruction for the sole purpose of combating the God of the Bible? Timothy Dailey in his fascinating book The Paranormal Conspiracy: The Truth about Ghosts, Aliens and Mysterious Beings explores this important issue.

There can be no doubt there has long been a fascination with that which lies within what is typically labeled as the genre of science fiction and horror. Movies ranging from The Exorcist to The Blair Witch Project dive into the world of spiritualism and demonic forces. Other movies such as the classic The Day the Earth Stood Still or more recent fare such as The Avengers portray characters of great power descending upon planet Earth, some with the apparent intention of assisting the poor people of Earth with other beings seemingly devoting the entirety of their resources to rain down destruction on the third rock from the sun. Why the continued and ever increasing fascination with such things? Dailey suggests that while watching science fiction movies is not necessarily a doorway into the occult, it can be stated that when it comes to issues such as Bigfoot, UFOs, and other issues related to things of a more spiritual nature, what lies behind that door is sinister and devoted to the destruction of those who involve themselves in such pursuits often unbeknownst to those participating in this spiritual charade.

By providing a number of very interesting real life accounts of those who fell prey to the allure of this demonic influence, Dailey reveals that the source of the problem is that which the Apostle Paul warned against in Ephesians 6:12, namely the reality that our battle is not against flesh and blood opponents, but against the sinister powers of darkness that seek to destroy. Often masquerading as beings of light sent to help humanity lift themselves out of the doldrums of their existence on earth to achieve enlightenment, these spiritual forces cleverly lay traps luring their victims into a world of darkness.

We live in a world of people looking for answers. Some are increasingly turning to the occult through the form of séances, spiritualism, and all manner of dalliance with these spiritually dangerous pursuits that will ultimately lead them not to enlightenment, but rather to eternal destruction. It is vital for believers to be able to recognize the root of this evil that has become so popular in our day. Some state this is just an innocent game. As Dailey saliently shows throughout this informative and excellent book, this is no game. A real evil exists that seeks to destroy.

I truly appreciated the way in which Dailey presented the material in this book. He allowed the stories themselves to demonstrate what going down the path of the paranormal will result in for those who have tread that dangerous road. Dailey also concludes his effort with the answer to this issue at hand, namely the saving message of the gospel. Hurts in our lives cannot be answered by trying to reach out to someone across the grave. Scripture calls such things an abomination and warns repeatedly against becoming involved in such activities. As Dailey states so powerfully, “there is One who is greater than the dark, malevolent forces that have only fear, chaos hopelessness to offer” and his name is Jesus and he offers eternal life for those who call on his name.

I highly recommend this book for all believers. It is impactful, substantive, and very much needed in a time when the search for answers is leading many down the path towards embracing the dark and demonic. Dailey opens the door on the paranormal conspiracy revealing it for the charade that it is, helping the reader understand its agenda and how to battle against this pernicious enemy.

I received this book for free from Baker Publishing Group for this review. I was not required to write a positive review. The opinions I have expressed are my own. I am disclosing this in accordance with the Federal Trade Commission’s 16 CFR, Part 255 : “Guides Concerning the Use of Endorsements and Testimonials in Advertising.”