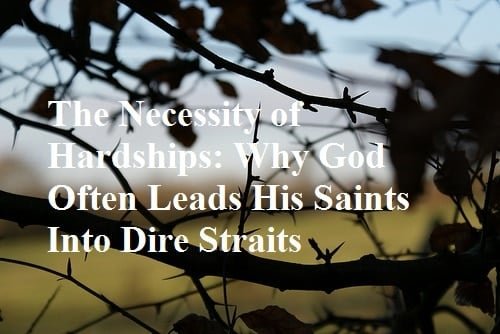 The Necessity of Hardships: Why God Often Leads His Saints Into Dire Straits

by David Schrock | Dec 8, 2016 | The Gospel and the Christian Life, Academic Work, Featured

2 Corinthians 1:8–9, “For we do not want you to be unaware, brothers, of the affliction we experienced in Asia. For we were so utterly burdened beyond our strength that we despaired of life itself. 9 Indeed, we felt that we had received the sentence of death. But that was to make us rely not on ourselves but on God who raises the dead.”

When Jesus announced his impending death, he just as quickly announced the kind of “death” required of his disciples. Luke 9:23–24 reads,

23 And he said to all, “If anyone would come after me, let him deny himself and take up his cross daily and follow me. 24 For whoever would save his life will lose it, but whoever loses his life for my sake will save it.

The invitation to follow Jesus is not the road to glory, even as it leads to glory. And this is part of the plan. God tests the faith of his followers to prove its sincerity. As Peter learned from Jesus (John 21:18), the path of discipleship is sovereignly tinctured with suffering for the purposes of glorifying God and purifying the saint (cf. 1 Peter 1:7).

Believers, young and old, often struggle with this fact. Often, when God rescues someone from sin and the consequences of sin, the general tenor of life improves. The fruits of repentance are love, joy, peace, etc. Yet, amidst such blessings comes divinely ordained hardship. Jesus spoke of Saul that he would “show him how much he must suffer for the sake of my name” (Acts 9:16). And, indeed, God shows everyone of us differing degrees of affliction so we would refuse to trust in self and only trust in him (2 Corinthians 1:8–10). One example of this is found in Acts 16 and bears our prayerful meditation.

First, in Acts 16 Paul is directed by the Holy Spirit to go to Macedonia. In verses 6–10, he is blocked by the Holy Spirit on a number of accounts. First, the Spirit prevented them from speaking the word in Asia (v. 6). Second, the Spirit hindered their approach to Bithynia (v. 7). Third, they went to Mysia and Troas but did not stay in either locale. Finally, in verses 9–10 Paul receives a clear vision to go to Macedonia. From this vision Paul naturally concludes, “that God had called us to preach the gospel to them.”

One might conclude this calling promised a trouble-free trip to Macedonia. Or at least, that after Paul’s struggles Paul could see the hand of God bringing him into smoother waters for swimming. But such is not the case, and it often is not the case for Christ’s followers.

Acts 16 records the challenges of bringing the gospel to Philippi, the “leading city of the district of Macedonia and a Roman colony” (v. 12). First, there was the aggravation of having a spirit-possessed girl following them (v. 17). If God had brought Paul to Philippi, the powers and principalities (who knew or would come to know Paul, 19:15) were put on high alert. And this girl was the first evidence that opposition was coming.

In response to this girl, Paul rebuked the demon (v. 18) and angered her owners. The second point of opposition was the anger of these men who saw their hope of profit in this girl was lost (v. 19). They brought Paul and Silas to the marketplace and accused them of disturbing the city (v. 20).

This led to the third and greatest act of opposition, the magistrate’s physical abuse. As the crowds attacked Paul, the magistrates “beat them with rods” (v. 22) and threw them in jail (v. 23), binding them in the stocks (v. 24). All in all, while the initial ministry of the word brought some fruit (Lydia in vv. 11–15), it hardly looks as though a wide door of ministry had been opened for Paul and Silas.

But this is where our expectations and understanding of ministry is confronted by the Bible. For us, a call to preach the gospel somewhere is likely assumed to mean an open door with some measure of ease and receptivity. However, that is not how Paul understood it. In 1 Corinthians 16:8–9 Paul assesses his labors in Ephesus and he says, “a wide door for effective work has opened to me, and there are many adversaries.” For Paul, opposition to the gospel confirmed the work.

And why might this be his conclusion? Because in places like Philippi, Paul did not question God’s direction (given in Acts 16:9–10). Rather, in chains he praised God, prayed, and waited to see how God would work. And what did God do? He shook the jail, freed the inmates, brought the jailer to the point of death, and enabled Paul to share Christ with him and his family. God made good on his visionary direction, but only after bringing Paul through the trials of great opposition.

One might ask: Is this how God always works? Surely, any student of church history knows that God’s choicest saints are often laid low before God brings great blessing. Just the same, affliction often accompanies blessing so that the servant of God would not think too highly of him or herself. While our age of self-fulfillment teaches us to call these blessings curses, Paul himself learned that his thorn in the flesh was given to him by Satan in order to affect God’s purpose: ongoing humility in the work of the ministry (2 Corinthians 12).

Indeed, we do well to spend time meditating on these truths, that when God promises success to the ministry of the word, he does not promise ease. In fact, the whole book of Acts is a testimony to the way God’s promises of blessing and support must be read at the end of the story, not in the middle—e.g., see how God’s promise of protection (“no one will attack you to harm you,” Acts 18:10) does not mean “no one will attack you.” The promise is one of protection from lasting harm. Indeed, just two verses after Paul is promised “not one will attack you,” Luke writes, “the Jews made a unified attack.”

Do you see what Luke is doing? He’s teaching us God’s promise of protection is not the absence of affliction but grace in the midst of trial. This way of thinking is so foreign to us, but it is absolutely necessary. The only way we will abide in ministry is to learn from the likes of Paul that suffering and trials are not a hindrance to an open door for ministry. Often they are the very means by which the Word of God is carried forward.

“We Must Not Mind a Little Suffering”

In Philippi, in Corinth, in Ephesus, in almost every place the Word of God bears lasting fruit, difficulty was required so that the disciples of God might despair of themselves and trust only in him. While uncomfortable in the flesh, this approach accords with the fact that the message of the cross and resurrection is best conveyed when it’s messengers display in their lives weakness, not power. The resurrection  is not displayed in earthly power, but in spiritual power overcoming earthly weakness.

And thus, as Charles Simeon once said, “we must not mind a little suffering.” Indeed, from the testimony of Scripture, we might go one step forward. The call to preach the gospel—vocationally or relationally—is a call to display in our lives the death and resurrection of Jesus Christ. At least, this is how Paul understood it (cf. 1 Corinthians 2:1–5; 4:12–13; 2 Corinthians 4:10–11; Philippians 1:29; 3:9–10; Colossians 1:24).

As we endeavor to serve the Lord may we not be surprised by the fiery trials and dire straits the Lord brings us into. They are not mistakes of his providence, but the very ways he purifies our faith and amplifies the sound of his gospel message. For that reason, let us not lose heart when trials come, but rather press into Christ and watch for his working. This is what Paul did as he waited on the Lord in the Philippian jail; it is now our turn to praise and pray as we labor in the Lord’s power.

This article first appeared at David’s blog and is posted here with his permission.