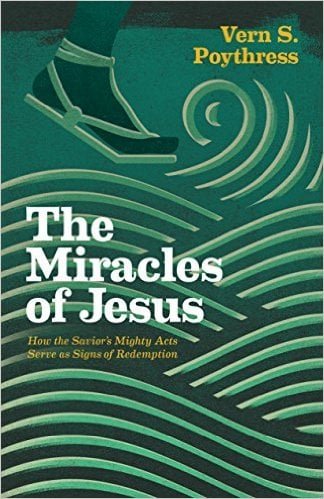 The Miracles of Jesus

Outside arguably the parables of Jesus, His miracles are some of the most beloved portions of the gospels. Whether it was His first recorded miracle of changing water into wine or the feeding of the five thousand with five loaves of bread and two small fish, we are continually amazed at those actions of our Savior. But there is more to the story than the mere feat of Jesus walking on the water or healing a blind person. Those actions point to something quite profound. In his latest book titled The Miracles of Jesus: How the Savior’s Mighty Acts Serve as Signs of Redemption, Vern Poythress seeks to discover what exactly the purpose behind the miracles might be and why that is significant for us to focus upon.

Poythress is well known to be an amazingly gifted biblical scholar. His previous works I have read were outstanding examples of academic minded scholarly writing, perhaps even a bit on the far end of the “nerdy” side. I was expecting much of the same approach with this latest release, namely perhaps some sort of engagement of the deep theological insights into the miracles of Jesus. To some degree Poythress does that albeit in a less academic manner than many might expect from him. I suggest that makes this book a bit more accessible than some of his other efforts and that is certainly a definite positive.

The miracles of Jesus which Poythress interacts with are all located in Matthew’s Gospel. This is not to suggest that miracles recorded in the other Gospel accounts are unimportant. Given the many miracles found in the four Gospels, there is nothing wrong with Poythress deciding to focus on a variety of accounts from Matthew alone. In total, Poythress examines 29 miracles including the birth of Jesus and His resurrection, miracles we often forget about as being miracles given the great focus on feeding the multitudes and the healing of the sick.

Throughout this helpful book, Poythress centers his conversation and discussion on how the miracles of Jesus are signposts if you will of redemption. In that pattern of redemption, we can discover the necessary elements of application for us today, something that is sorely missed when we read about these miracles.

Woven throughout each chapter in which Poythress discusses the miracles of Jesus noted in Matthew’s Gospel, Clowney’s Triangle is utilized in an effort to reveal elements of typology rooted in those events. I found that approach to be quite fascinating and enlightening. For instance, seeing connections between the giving of the manna to the Israelites during their wilderness wanderings, Jesus as the bread of life, and the feeding of the 5,000 provides some valuable connections. As Poythress saliently notes, “All these accounts fit together with a larger picture in which God promises to be the all-sufficient supplier of needs to those who trust him. The context of God’s character shows that the provision of physical needs expresses a deeper commitment on God’s part to supply all needs.” Those needs are not only physical, but ultimately spiritual in nature with the ultimate focus being the future redemption and restoration of all things when the Bridegroom returns for his bride.

I found this to be a very useful book and one I will return to many times in the future, especially when engaging the miracles of Jesus and how they fit into the greater theological message of redemption found throughout Scripture. Poythress hits another homerun in my humble opinion with a book that represents the scholarship one has come to expect from an author such as Poythress while being a bit more accessible than many of his other titles. He has struck an excellent balance with this release and I highly recommend it.