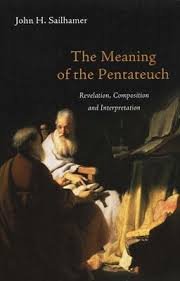 The Meaning of the Pentateuch

Evangelicals are desperately in need of a deeper, richer understanding of the Old Testament as a whole and the Pentateuch in a particular. For many, the Pentateuch is either irrelevant to the Christian, or simply a series of proof texts for the coming fulfillment of the Messiah. John Sailhamer has devoted his career to helping Evangelicals understand the Old Testament more fully. Specifically he wants us to focus on what the text actually says as a whole. While The Meaning of the Pentateuch has much to commend to readers, it is best viewed as a starting place for further conversation.

The book is broken down into three parts. The first part, “Approaching the Text as Revelation,” sets Sailhamer’s work within a thoroughly Evangelical context. The book concerns itself with the self-revelation of God in the Old Testament Scriptures. He writes that “A theology of the OT in such a setting is understood as a study of divine revelation presented in the OT” (59). Here he gives us an approach to hermeneutics that fits within this understanding and challenges some of the more liberal tendencies interpreters take with the text. Ultimately, says Sailhamer, we want to concern ourselves with authorial intent as revealed in the actual words of the text. He wrestles here with the place of history in the interpretive work, and emphasizes the tremendous importance of viewing the Old Testament Scriptures in their final form, not their progressive development.

Part two focuses on the compositional strategy of the Pentateuch. This is Sailhamer’s major focal point throughout the work. The Pentateuch, he argues, should be read as a whole. He writes:

The task of weaving these literary pieces together into a single composition, a “Pentateuch,” was the achievement of a great literary talent. It is the work of the “author” of the Pentateuch. The unity of the book’s plan, its design, and scope, betray a singularity of purpose that can only be described as that of an author…The aim of a theology of the Pentateuch lies in the discovery of that purpose through careful examination of the author’s compositional strategy. Ultimately, our aim is not to deconstruct the Pentateuch, but to let it remain intact and attempt to sort out its various parts, assigning some weight of importance to their pattern of distribution within his book. (282)

Sailhamer wants to treat the Pentateuch as a whole book in and of itself. He shows the intertextual relationships well and gives readers amazing insight into this aspect of composition. He shows the relationships between the various poems and narrative sections, as well as the reiteration of specific phrases throughout the Pentateuch. In some ways, he opens up the text to the average reader to see with fresh eyes. He aims to help us understand something of the central features of the book too, namely: human failure, divine grace (blessing), faith, law, and covenant (p. 290). He helps us to ask the right kinds of questions and to distinguish between authorial intent and narrative setting, so that we interpret the text rightly. This section of the book will be some of the most fascinating and controversial.

Finally, part three, “Interpreting the Theology of the Pentateuch,” explores the theological meaning of the book. Here he unpacks the thematic development of major ideas across the whole of the Pentateuch, exploring salvation, faith, law, covenant and blessing, and Jesus. Many of the ideas discussed in this section will have already been picked up elsewhere in the book, but are repeated here for further clarification.

Overall the book is impressive, not just in scope, but in depth. The work is erudite and stimulating. He not only covers subjects like the history of interpretation, but examines specific words and phrases too. He quotes extensively from primary sources and demonstrates great skill in the Latin and Hebrew. Yet a work as groundbreaking and massive as this one has a number of shortcomings too.

In particular, Sailhamer is exceedingly repetitive. The book is so redundant, in fact, that whole sections of the work feel utterly tiresome. There are moments in reading where it feels as though you have jumped back to previous chapters, where the author has literally cut and paste his previous statements. In fact, by the time you get to part three of the book it seems as though he has almost nothing new to say to add to the development of his thesis.

In addition, the author seems to make more assumptions than he admits. While holding to general Mosaic authorship of the Pentateuch, Sailhamer observes a number of what he calls “interpretive comments” from later Biblical authors. So that while we may say that the Pentateuch was originally written by Moses, its composition as the Pentateuch lies at the hands of another author. The “interpretive comments” he points to, however, are subject to continuing debate. Yet, he never gives us clear criteria for distinguishing between what is original and what is interpretive commentary. He never clarifies exactly how he comes to conclude that certain phrases or poems are the product of later writers. That leaves some pretty big gaps in his argument.

This is an impressive volume with much to commend itself to modern readers. Its approach toward a hermeneutic of final composition and its embrace of divine revelation are to be lauded in contemporary Evangelical scholarship. Yet, readers should not adopt all that Sailhamer offers. This is the beginning, I believe, to further conversation, but it is much needed further conversation. The Meaning of the Pentateuch is a great starting place for revisiting the actual text of the Old Testament, but only as a starting place.