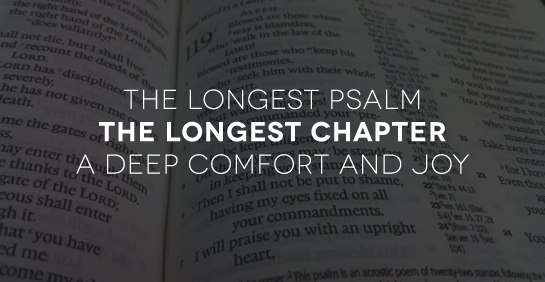 If you turn to the very middle of the canonical Bible, you’ll find yourself in Psalm 119, which is not only the longest psalm but also the longest chapter in the entire Bible. Furthermore, it is not just long in its length, but it is also deep in its content.

We do not know for certain who the author of this Psalm is, although historians have thought it is likely to be David, Ezra, or Daniel. Whoever wrote it did something very unique and peculiar with this psalm. Jamiesson, Fausset, and Brown explain:

This celebrated Psalm has several peculiarities. It is divided into twenty-two parts or stanzas, denoted by the twenty-two letters of the Hebrew alphabet. Each stanza contains eight verses, and the first letter of each verse is that which gives name to the stanza. Its contents are mainly praises of God’s Word, exhortations to its perusal, and reverence for it, prayers for its proper influence, and complaints of the wicked for despising it. There are but two verses (Psa 119:122, 132 ) which do not contain some term or description of God’s Word. These terms are of various derivations, but here used, for the most part, synonymously, though the use of a variety of terms seems designed, in order to express better the several aspects in which our relations to the revealed word of God are presented. The Psalm does not appear to have any relation to any special occasion or interest of the Jewish Church or nation, but was evidently “intended as a manual of pious thoughts, especially for instructing the young, and its peculiar artificial structure was probably adopted to aid the memory in retaining the language.” (source)

The theme of this psalm is the word of the Lord. More specifically, the purpose of the psalm is to serve as a song and prayer of someone who delights in the law of the Lord. We see “the law” in many lights and diverse ways throughout the psalm. The topic is wonderfully pursued in every stanza. It is an acrostic poem on the joys and benefits of God’s word. Charles Spurgeon once said it “might well be called the holy soul’s soliloquy before an open Bible.” Elsewhere he wrote:

Many superficial readers have imagined that it harps upon one string, and abounds in pious repetitions and redundancies; but this arises from the shallowness of the reader’s own mind: those who have studied this divine hymn, and carefully noted each line of it, are amazed at the variety and profundity of the thought. Using only a few words, the writer has produced permutations and combinations of meaning’ which display his holy familiarity with his subject, and the sanctified ingenuity of his mind.

During a time of great political trouble, William Wilberforce said he would “walk from Hyde Park Corner repeating the 119th psalm in great comfort.”

What about you? Does God’s word give you comfort in this way? Does it make you pour out in song and prayer and praise? Is His word something you cling to? delight in? and hide in your heart?

May that be our prayer today. Let me encourage you to visit the 119th psalm today and meditate upon the joys and wonders of God’s word and law.