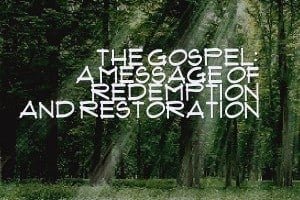 The Gospel: A Message of Redemption and Restoration

The word gospel has experienced a bit of a resurgence of late. All one has to do is take a walk. down the aisle of their favorite Christian bookstore or go to their favorite blogger’s website to see this term utilized in seemingly every book or blog post title. We are encouraged to be “Gospel-Centered”, “Gospel-Driven”, “Gospel-Focused”, to “preach the gospel”, “love the gospel”, and to “not be ashamed of the gospel”. Trust me this is just a small snippet of the many ways gospel is used in titles and conversation.

To have any chance at understanding what the gospel is about, we have to start the conversation way back in Genesis. In the first two chapters of Genesis, we are told that God created everything and He created everything perfect. There was no sin and there was no death in the original creation. Man, experienced perfect harmony with nature and more importantly, man (meaning Adam and Eve) knew God both physically and spiritually. There was no separation of Creator and His creation. We are told that God made a habit of walking in the Garden with man. As long as man was obedient to God’s command, this wonderful existence of complete perfection was designed to extend into eternity with man having dominion over creation and their progeny filling the earth.

Something happened to impact this perfect existence. That something was sin. Once man sinned, the perfect relationship between Creator and His creation experienced a tragic separation. God being without sin would no longer dwell with man who had sinned. Furthermore, all creation began to groan under the weight and impact of that sinful deed. Yet despite this horrific separation from God and the resulting process of death, both physical and spiritual death, beginning to ensue, hope was provided. Genesis 3:15 is often called the protoevangelium or the first gospel message. In this passage, God declared:

Thus, the message of the gospel involves the Messiah, the Promised One sent by the Father to pay the penalty for our sin. This is the message of salvation. The question remains as to salvation from what? Salvation from hell? Again it is in part salvation from hell and eternity with God, but as we noted earlier, that is merely the tip of the iceberg. You see prior to sin coming into the picture, there was no need for salvation. Everything was in perfect order and man’s relationship with God and with nature was the essence of beauty. They were in the very presence of God because He dwelled with them in the Garden. When they sinned, man was removed from the Garden with the promise given that redemption would take place through the Messiah.

This presents another question. Redemption to what? We are often told that we are redeemed from sin and death by the shed blood of Christ on the cross. Very true indeed. Christ did buy us back through that sacrifice. In fact, the word redemption has as its meaning the action of “buying back” or more specifically, in this case, “buying or purchasing back that which was lost”. But what was lost and where was it lost? We must remember that what was lost was a relationship with God in the Garden of Eden. When sin came into the picture, man lost a great many things to include the beauty of physical interaction with God in a place, with that place being the Garden, a place of existence on earth.

Why is this even important and what does it have to do with the gospel? God promised to redeem His people back to Him so that which was lost would one day be restored. Since that which was lost was not only the beauty of physical relationship and the absence of sin but also a perfect existence in the Garden on a perfect earth in a universe without death and decay, we have to state that the gospel includes all of these things under the umbrella of redemption. We lost our heritage in the Garden, that perfect existence with God for which we were created and the movement of history is a return to that heritage for those who are the children of God. We are looking forward to that Day when all things are restored and we live for eternity in the presence of God in this restored “Garden”.

The banishment from the Garden will be lifted and we will once again live in the presence of God in a place that functions in all elements of perfection. Sin and death will be destroyed for all eternity and the heritage that was once promised will be restored. The joy of relationship will be a joy everlasting. This is truly what the gospel is all about. It is far more than just getting your ticket punched to escape hell and make it to heaven. Embracing the gospel will, of course, involve escaping the torment of hell. There is no question about that, but in biblical terms, the story presented is one of redemption and that redemption is the restoration of relationship.

So as we become “gospel-centered”, “gospel-focused”, “gospel-driven”, etc. let us not forget what the message of the gospel is all about. It is more than not going to hell. It is all about redemption in the context of a relationship with God. When we understand the gospel in those terms, we will in turn grasp what God is doing and revealing in His Word and what all of history is moving towards. Furthermore, we will better understand the importance of growing in relationship with God as we await that glorious day when that which was lost is restored for all eternity. Certainly saved from eternal destruction, but most importantly, saved to restoration of a relationship with God.